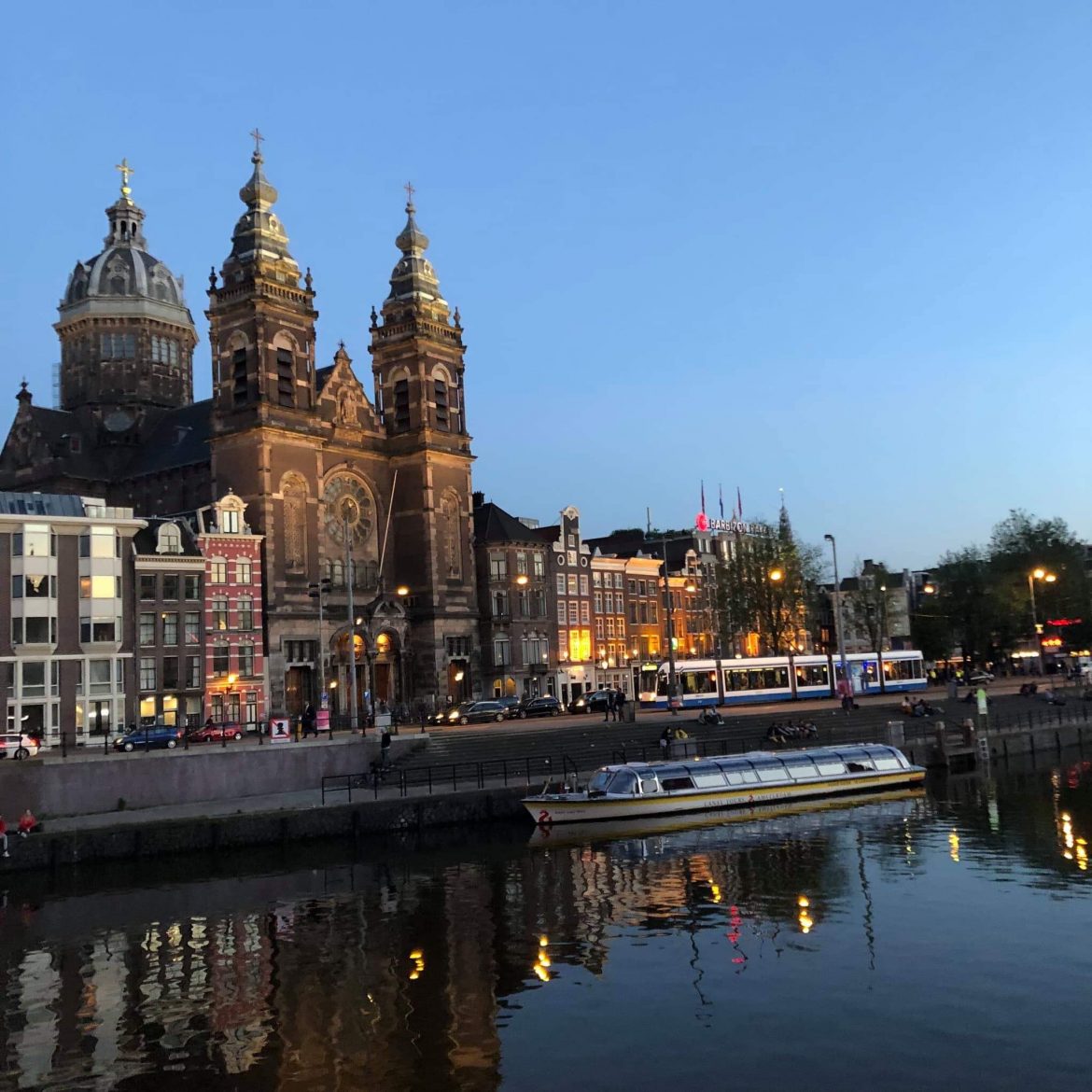 Amsterdam has been dubbed the "cycling capital of the world" for its sheer number of bikers and the 250 miles of scenic bike paths that wind through the city.

Notorious for its risqué facilities and haze-filled “coffee” shops, Amsterdam might not seem like the ideal spot for a family vacation. However, my time spent in the city has revealed many of its facets that extend beyond the city’s misunderstood reputation.

Our first step into the airport after a 12-hour long flight from LAX revealed a dramatic change in scenery. The Schiphol Airport was laden with modular architecture, almost as if inspired by the furniture in IKEA. My father had a business call to attend to, which allotted three hours of time designated solely for airport exploration. Amongst our favorite finds was a NEMO museum pop-up containing various science demos, and a colorful petite library in which we took a quick pit stop.

Our hotel was not far from Amsterdam Palace, however, a check on Google Maps revealed that a quick stroll in the wrong direction would’ve put us in the center of De Wallen, the Red Light District. The compact streets of Amsterdam allowed for easy locomotion, which unfortunately also meant that the idyllic and unpleasant were within close proximity. One moment I’d be frolicking through scenic Vondel Park, and the next plodding through “coffee shop” smoke, the sour musk of marijuana filling my lungs.

As much as I’d like to say we avoided De Wallen, we did have some encounters with the area. It occupies a long strip of land smack-dab in the center of Amsterdam; a walk through it is practically unavoidable. Our encounters were surprisingly less raunchy than the tales give credit to. My family decided to walk to the docks on the north end of the city, and on our way we passed through the District. I had no knowledge of this until our walk back took us past a red-lit window.

Amsterdam’s infamous tales of legalized marijuana and red-lighted brothels overshadow the brilliance that lies in the city’s eco-friendly agenda. The streets were crowded with electric taxis, and our frequent walks through the city revealed that bicycles were just as abundantly used as cars. Each vehicle had their own designated traffic lights. One billboard advertisement for Coca-Cola caught my eye, titled “Don’t Buy Coca-Cola.” On second glance, the tagline read, “Don’t Buy Coca-Cola if You Won’t Help Us Recycle”. This remarkable call to action showed just how different American culture is from Amsterdam’s; the pragmatic mindset of the Netherlands has led to a more progressive society.

While the population lends itself towards the future, the city has quite a history. Through short walks and long outings, I learned of Amsterdam’s rich concentration of art repositories and museums. The contemporary art of Banksy and Daniel Arsham at Moco were within sight of the canvasses at the Van Gogh Museum, while Rembrandt’s canal house lay but a mere quarter-mile from our hotel. Van Gogh’s art was, for lack of a better word, unbelievable. Standing in front of his canvas, the one touched and labored upon by Van Gogh himself, was overwhelming.

The weight of history was also evident in my visit to the Anne Frank house, which revealed a poignant example of the tragedy caused by the Nazi regime. Standing in the poorly lit, empty “achterhuis”(Dutch for “rear house”) was as disturbing as seeing the grisly images of stacked corpses along the hallways of the museum. A book displaying the names of those murdered, though nauseatingly thick, still seemed inadequate in representing the magnitude of the Holocaust. The museum left us in a somber gloom that didn’t shake off until nighttime.

Vondelpark, on a brighter note, was undoubtedly the most memorable part of my trip. We had dedicated an entire day to exploring it, and I learned that it was hosting a concert featuring rising musicians. The park was beautiful, of course, but my anticipation built as we leisurely made our way towards the “Openluchttheater.” We arrived while the first act was performing his sound check. His name was Tim Dawn, which I struggled to pick out among the rapid-fire Dutch words  coming from the amphitheatre’s speakers. His first song was titled, “Walking on a Wire,” and it completely caught me off guard when he began singing his song with perfect English. He had amassed quite a crowd, and rightfully so. This song became my Amsterdam song, the one that will bring back memories whenever I hear it played.

Apart from the occasional whiff of sidewalk marijuana, Amsterdam is the ideal family vacation spot. Bicycles whizzing along canals lined with gabled houses, diverse yet divine cuisine, bustling markets, cozy cafes, and small-scale intimacy are what set Amsterdam apart from the rest.

Memories of Van Gogh’s “Bedroom in Arles” and Tim Dawn’s “Walking on a Wire” in Vondelpark will last for the rest of my life, while Anne Frank’s somber memoir and the Annexe’s disturbing emptiness will live among my most indelible of nightmares. Countless meals in cafes along the canal paths and the golden lanterns illuminating the tables of extravagant restaurants are now favorites in my list of eatery settings. My solo runs along miles, or rather kilometres of bike paths rival the beautiful landscapes of ones I’ve experienced on Kauai, Maui, and Honolulu.

And so, as I stepped back into the airport, my rapture faded. It was only until the flight attendant stated we were bound for Los Angeles that I had realized my mistake — I should have brought my bike.