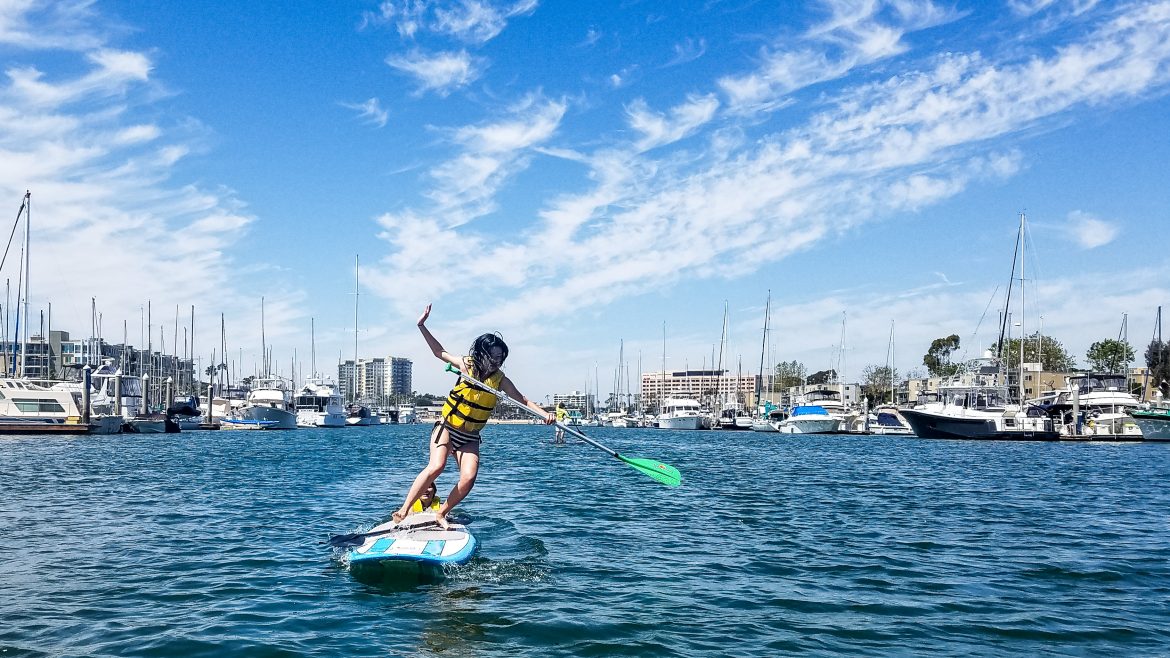 Stories and Photos by Luke Quezada

With summer on the horizon, Kate, Finley, Helena, and I decided to escape from the confines of South Pasadena and venture to Marina del Rey for a day of fun in the sun. After securing a small fleet of paddleboards and kayaks, we set off triumphantly. Though we used our own gear, watersport rentals are available around the marina, including Paddle Method on Mothers’ Beach.

Within the first thirty seconds, Finley had fallen into the water. Clearly, the “run-and-hop” method was not the proper way to board a stand-up. After gathering himself, Finley was up once again and more determined than ever. We set out in search of manmade cove Mother’s Beach, with Helena and I on a kayak and Kate alongside Finley on another paddleboard.

As Kate and Finley glided across the water with ease, Helena and I tried to get it together and catch up with the other half of our intrepid squad. Kayaking was clearly a far more arduous process than we had planned on. We soon realized that navigating the marina meant avoiding the dozens of yachts whizzing through the middle of the waterway at all times. We found the easiest way to avoid as many boats as possible was to cling to the docks and paddle like mad when the time came to cross a heavily trafficked channel. Half an hour and a lifetime of obscenities and panicked paddling later, we finally reached our destination: Mother’s Beach, a slice of paradise in an otherwise stagnant life.

Complete with copious amounts of stingrays, a Cheesecake Factory within walking distance, and a spot on the top ten list for California’s most polluted beaches, Mother’s is the perfect spot for a weekend getaway. The moment we stepped foot on the petroleum-soaked sand, we knew we were in for a treat. In all honesty, the beach is pretty enjoyable aside from the occasional beer bottle, and the protected cove provides a perfect location for beginner paddle boarders with limited swell and wind.

Although we neglected to bring any games with us, navigating the shoreline while attempting to avoid cigarette butts and stingray barbs provided a thrilling way to pass the time. After a while spent amongst the sand, we decided to explore the area for some food.

We stopped by the Marina del Rey Farmers’ Market, located in the Mother’s Public Parking lot. Open every Sunday from 9 a.m. to 2 p.m., the market is a surprisingly cheap option for everything from vegan tacos to designer throw pillows. Organic produce, freshly baked pastries, and live music are all available amongst the vendors. We indulged in some pork tamales and bean and cheese pupusas before paddling back to the real world.

As our trip came to its close, Kate, Finley, and I peacefully drifted with the tide as Helena violently slipped off of her board. We laughed before paddling off into the sunset, pupusas in hand.