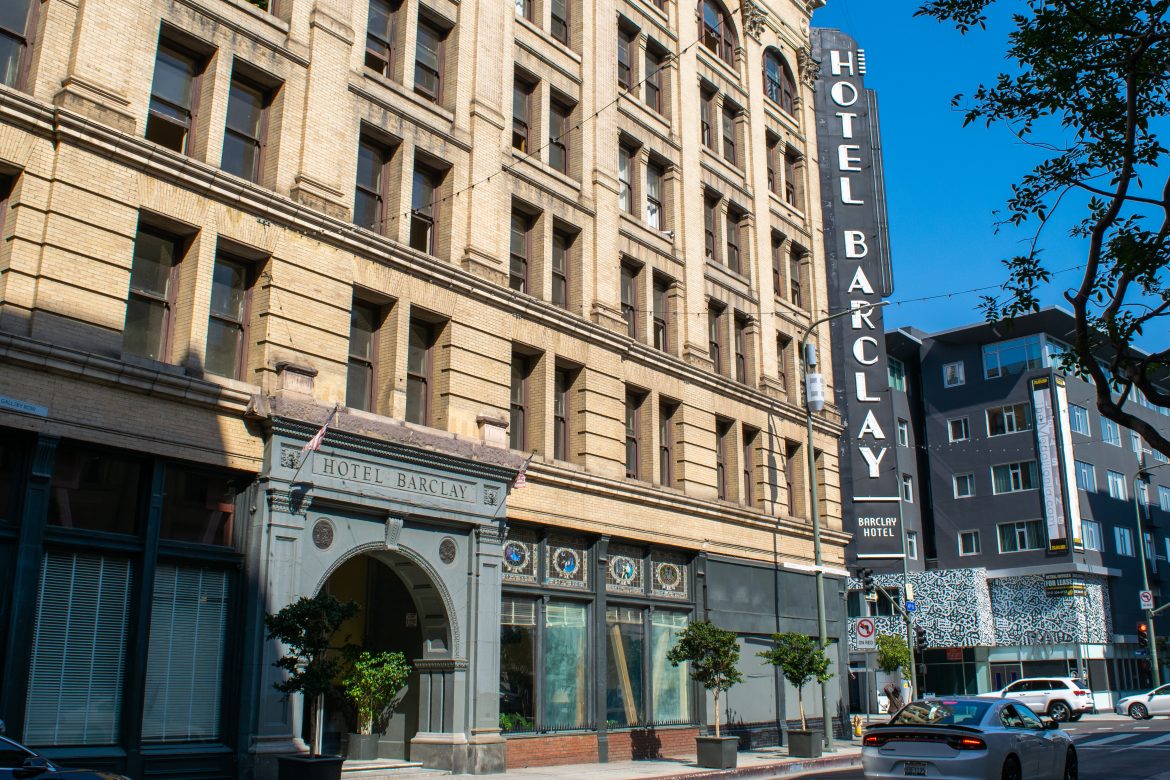 Old L.A. glamour echos faintly though the drafty floors of the Hotel Barclay.

Downtown Los Angeles is a popular location for many films, particularly romance films, because of its versatility and the subtle nostalgia of its older buildings. In the iconic doomed-romance movie, 500 Days of Summer, which follows the birth and ultimate decay of couple Tom and Summer, the city takes on a larger role as an integral part of the plot. On a hot Sunday morning, Katelyn Hernandez and I set off to Downtown LA to explore the locations of 500 Days.

My first stop was the Hotel Barclay, which was converted into a hip coffee bar where Tom and his friends hang out, however, the real hotel is anything but contemporary. Nothing can quite describe the feeling upon first walking into the hotel. The decaying lobby almost feels captured in Downtown’s golden age, now a distant memory. The lobby was mostly bare apart from a few solemn figures slouched in the mismatched chairs, a stark contrast from the glamorous pink moulding and stained glass windows that reflect onto the tile floors in the afternoon light.

The Hotel Barclay was one of the several grand hotels built in the early 1900s, but like many other hotels, began to decline following suburbanization in the 1920s and 30s. Despite efforts to renovate the building into a luxury hotel, it is now a primarily low-income residence, resisting the rapid gentrification occurring around it. Although its decay is apparent, the faint echo of its golden-age ballroom parties can still be heard.

Just around the corner from the Barclay Hotel, Spring Street’s tree-lined sidewalks are a breath of fresh air in the midst of busy downtown. Tom and Summer do a lot of their couple activities on this street, including visiting the record store and people-watching outside of cafes. This aspect of the movie, coupled with the neighborhood’s youthful vibe creates the perfect new relationship feel.

Dubbed “the park for everyone,” Grand Park is an oasis of shade and (mostly) quiet in the busy downtown area. The park stretches between the City Hall and the Los Angeles Music Center on Grand and features long shade dappled paths and native flora. The cascading waters of the Arthur J. Will Memorial Fountain are the obvious focal point of Grand Park, and the place where Tom does the iconic dance sequence to the Hall & Oates song, “You Make My Dreams Come True”.

Built in 1893, the Bradbury Building is one of Downtown L.A.’s great marvels, attracting tourists and design mavens from all over. A luminous five-story court lies behind the modest and often unassuming exterior of the building. The interior reflects the Italian Renaissance Revival style that was popular at the time, with its ornamental cast iron and skylight that floods the court with light.

In 500 Days of Summer, the Bradbury is the location of Tom’s dream architecture job. The building symbolizes a new beginning for him, both in terms of his career and his relationship. Beginning anew from a difficult time can be painstaking and stressful, but also liberating. One upsetting situation, like Tom and Summer’s emotionally fraught breakup, can send a person careening into a seemingly endless state of self-doubt and worry. Pursuing a passion that had been long set aside or labeled “unattainable” is truly the perfect remedy.

The movie’s locations make for a perfect romance movie, whether it’s the nostalgic feel of the Barclay or the youthful radiance of Spring Street. Many people like the idea of pursuing their dreams while simultaneously finding love, and Downtown Los Angeles is the perfect place for that. The seemingly endless sprawl of busy city streets and winding alleyways provide innumerable possibilities to meet new people and visit new places, which is part of the reason why the city is such an integral part of the plot. The older locations are more warm and romantic, yet the fast-paced feel of the city reminds viewers that when a relationship ends, not all hope is lost. As Tom’s friend Paul constantly reminds him, “there are plenty of fish in the sea.”