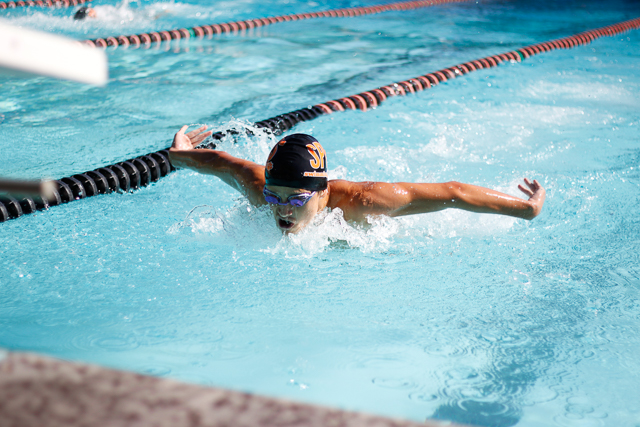 The South Pasadena boys’ and girls’ swim teams opened up league season with a successful meet against Monrovia this Tuesday, March 24th , crushing the Wildcats in many events.

“I think the meet went really well,” senior Kate Iio said. “We placed pretty much 1st, 2nd, and 3rd for all our races.”

The girls came out strong in the 500 free, won by seniors Grace Wakabayashi and Sabrina Zavala, and sophomore Jisu Kim. Kim won again in the 100 fly, followed by sophomore Perah Ralin and freshman Eileen Zenas. The relay teams swept as well, claiming first in the 200 medley, and 200 and 400 free.

The boys dominated in similar races. The 500 free was swept by junior Harry Kim, senior Court Blake, and sophomore Finn Hadsell-Florin. Junior Aaron Ogita had a highlight performance in the 50 free, claiming first and breaking a personal record with a time of 22.9, just barely missing the CIF cut of 22.8.

Overall, the meet was very successful, especially as a practice for the more intense races of the season.

“These meets are just to help us prepare for the rest of league and get us into the competitive mode,” senior Jasmine Lee said. “The only league meets that we’re really concerned about and fighting for are La Canada and San Marino.”