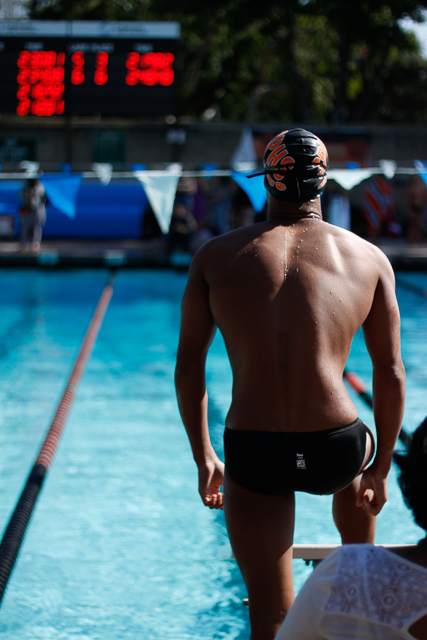 The swim team dominated in a dual meet against La Canada on Thursday with both girls’ and boys’ varsity taking down the Spartans.

The girls started out slow but soon gained a lead; senior Grace Wakabayashi doubling and taking first in the 200 and 500 Freestyle at 1:58.58 and 5:14.23. Senior captain Kate Iio followed, earning first place in the 50 Freestyle at 25.02 and the 100 Backstroke at 1:04.61. The Tigers took home first and second in the 4×100 Freestyle Relay, Iio and Wakabayashi teaming up alongside seniors Laura Mendenhall and Sabrina Zavala to take first place.

“The varsity girls actually had a rocky start to the meet,” sophomore Jisu Kim said. “We’ve never had much competition against any team, but once we realized that we had to fight harder to win, we placed in all the events we need to dominate and ended the meet victorious.”

The boys’ squad reached the same level of intensity as senior captain Garrett Tse lead the team with first place in the 200 Individual Medley at 1:55.22 as well as the 100 Butterfly at 52.34. Junior Aaron Ogita took first in the 100 Breaststroke with 1:04.18 and senior Will Jo followed close behind at 1:04.40. The Tigers also swept the 4×50 Freestyle Relay and the 100 Freestyle. Sophomore Jacob Mullin took first in the 100 Free with 49.67 seconds. Strong performances across the board consistently racked up points for the team, erasing any hope of a comeback for La Canada.

“It’s going to be a gruesome next two weeks of practice in order to get in top shape for our meet against San Marino,” Kim said. “The varsity boys lost to San Marino last year by only two points but with our solid team this year, we are anticipating on beating them. Even though they’re one of our biggest rivals I’m confident that we’ll definitely put up a good fight.”