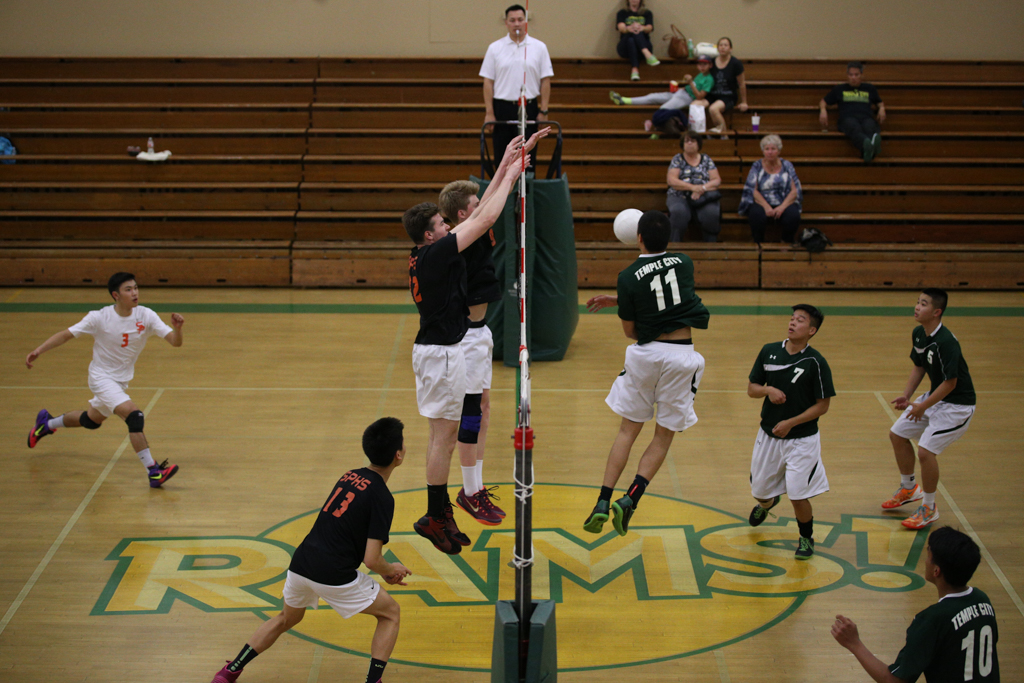 The South Pasadena boys’ volleyball team is looking stout after sweeping the Temple City Rams on Thursday, April 9. So far in the Rio Hondo season, the Tigers have dropped every team 3-0, proving their unstoppable prowess on the court. Although junior defensive specialist Scott Kawakami is still sidelined due to skin infections and junior setter Max Luck plays limited minutes due to an aching back and knee, the boys were more than capable of pulling out another impressive game, beating Temple City 25-15, 25-20, and 25-17.

The Tigers and the Rams both appeared solid in their respective areas of the game. The home team featured great offensive playmaking, but as South Pas showcased great outing on both offense and defense, the Tigers were able to establish an early edge at 13-9. Junior libero Alex Nakagawa put up a series of tough serves for the Rams to receive and contributed to the Tiger’s huge run all the way to the end of first set regulation.The boys turned on their full engine midway through the set, scoring double the Rams’ points with a 12-6 run to finish the set 25-15.

South Pasadena’s first set victory with such a large lead seemed to force the Tigers to lose energy as the Rams took advantage of the lackadaisical effort put forth by the visiting team. Temple City was doing what South Pasadena was doing in the first quarter: scoring easy points off of the opponents’ frequent mistakes on serve receive. The Rams never took a lead; however, due to South Pasadena’s offensive firepower under senior Richard Yu and junior Greg Luck’s leadership to make up for lacking defense. The set scoreboard read an extremely tight matchup at 16-15 with the Tigers up a single point with the flow of the game proving to be unpredictable. However, senior Paul Novak marvelously stuffed down the Rams’ outside hitter’s kill attempt to give momentum to the Tigers. Energized from the play, junior Matthew Ng contributed to the Tigers’ 9-5 spark in crunch time by completing a crucial kill. South Pas won the second set 25-19.

Returning from a risk of dropping the second set if not had been for the final push in the end, the Tigers reverted to their fully focused mentality shown in the first set. South Pas established an early 9-4 gap behind senior Aydin Pasebani and freshman Cole Schroeder’s accurate serving to feed teammates kills. The Rams would not back down easily; however, as they came through with well-coordinated offense to score multiple points to trail right behind the Tigers at 14-12. Yu and Luck then stepped up to stop the Ram rhythm by blocking down the third set stretch to lead the Tigers to pull away to 17-13. Schroeder continuously set up plays well until the final Tiger point of the third set in which South Pas won 25-17.

South Pasadena looks to improve to a highly impressive 18-1-1 overall record with a victory over Saddleback Christian Valley on Tuesday, April 14 at the Tiger gym.

Results for first round of commission elections