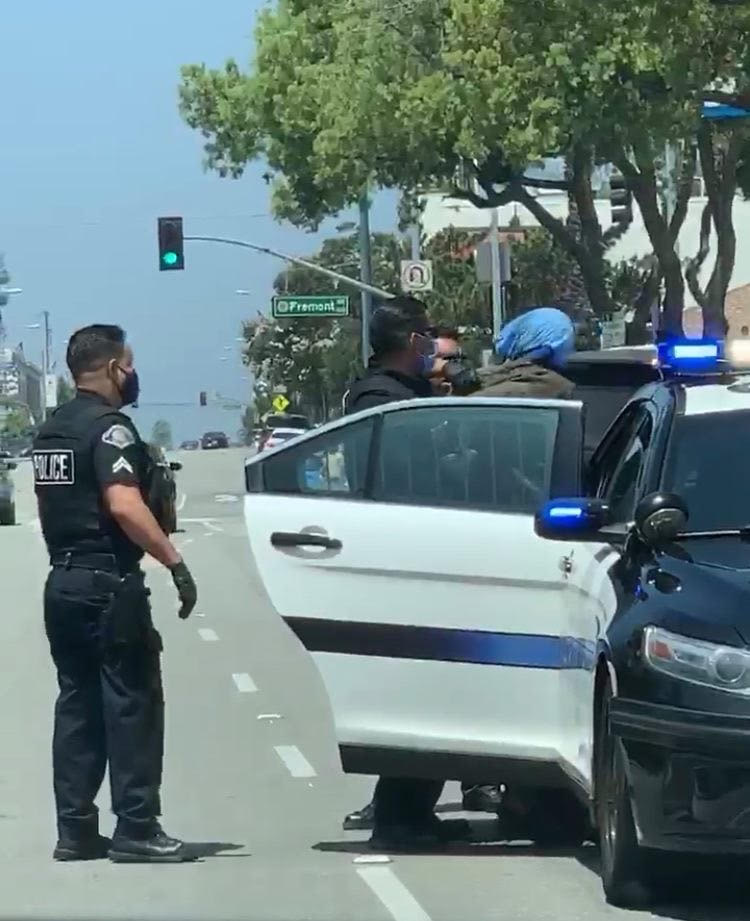 A witness of the arrest recalled hearing the detainee cry out in pain, although an officer involved at the scene disputed those claims.

The SPPD forcibly detained a middle-aged Black man on charges of assault and robbery in front of city hall on Tuesday, June 23. The police watch commander reported that the person had assaulted an individual and stolen their phone, and then ran towards Fair Oaks Avenue but was caught, handcuffed, and taken into custody.

South Pasadena Youth For Police Reform (SPY4PR) posted a video of the arrest sent by an anonymous witness. In the video, three police officers are seen throwing and then tightening a spit hood over the person’s head and trying to force him into a squad car for almost a minute.

An ambulance took the victim to the hospital while police forcibly arrested the suspect. More officers and the fire department arrived on the scene after the initial detainment at approximately 11:30 a.m.  The suspect was transferred to the Inmate Reception Center in Los Angeles on the basis of multiple felony charges and is currently facing parole.

Local community members criticized the officer’s usage of the spit hood and not wearing a mandated face covering, although the SPPD watch commander reported that the mask had fallen down during the arrest.

The spit hood is a mesh bag that police can legally use to protect themselves from a detainee spitting on them, although the practice has drawn contempt in the past for its potential linkage to suffocation.

SPPD’s policy manual states that officers may only use spit hoods when “the officer reasonably believes the person will bite or spit, either on a person or in an inappropriate place” and must ensure that the spit hood is fastened in a way “to allow for adequate ventilation and so that the restrained person can breathe normally.”

SPHS rising junior Juliet Champagne witnessed the arrest and then recorded her questioning an officer about the handcuffed individual. Champagne said that she heard the person screaming “stop I’m in pain” and “that hurts, I can’t breathe” while they were being forced into the police car. However, the officer Champagne confronted denied that those cries occurred.

“There was no force involved on [the suspect] or anything like that. I’m not sure if it was that he was [crying out] in pain, we were just trying to take him out of the car but actually, one of my officers was injured by him,” the officer responded.

The arrest quickly garnered attention from community members on social media, with many of those in support of the Black Lives Matter movement criticizing SPPD’s record and handling of the situation.

The SPPD declined to comment on the arrest but will circulate a press release soon.

SPY4PR announced that they will look more into the incident to ensure that it was handled appropriately. The group plans to protest at the intersection of Fair Oaks and Mission Street on Wednesday, June 24 from 12:00 p.m. to 6:30 p.m.

City council to vote on establishing a community policing sub-committee