SPHS Mediators receive scroll from LA County Board of Supervisors 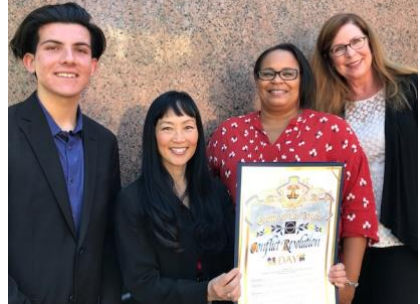 Team leader Will Hoadley-Brill and faculty advisor Ms Tracy Ishimaru receive a scroll in their fourth year of the Mediators program.

Photo courtesy of Will Hoadley-Brill

The SPHS Mediators received recognition from the Los Angeles County Board of Supervisors Tuesday, October 17. This recognition did not grant the Mediators any additional funds, but signifies the program as one of the best in L.A. County.

Team Manager senior Will Hoadley-Brill and Counselor and Faculty Advisor Ms Tracy Ishimaru accepted the recognition on behalf of the mediation program on Tuesday, October 17.  Continuing the recognition, the Mediators received an education grant from the Southern California Mediation Association on Thursday, October 19.

“This recognition is important because the SPHS Mediators and hundreds of mediators across the county and the country put their hearts and souls into creating healthier campus cultures by resolving conflicts peacefully,” Hoadley-Brill said, “[Mediators open] a dialogue about issues that are so often assumed to be understood or ignored completely. This honor shows that the efforts that Mediators put forth are necessary for the progression of school campuses nationwide.”

The Mediators will be hosting the Finger Painting Stress Relief Workshop in room 611 this Wednesday, October 25 during lunch.