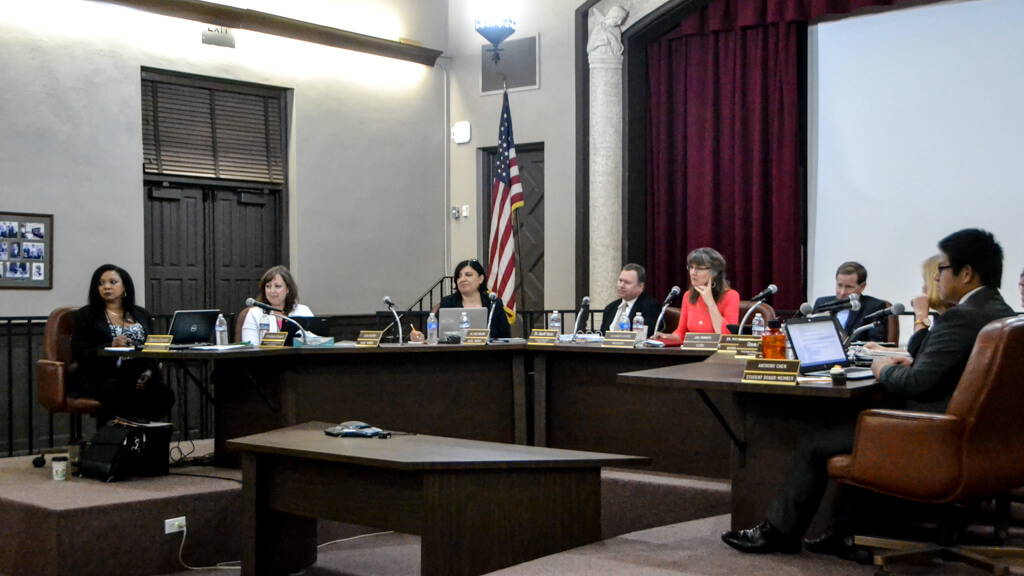 South Pasadena Unified School District board members discuss faculty size reductions due to a forecasted decrease in budget, a result of a smaller incoming class.

Facing a decline in enrollment for the 2018-2019 school year, the South Pasadena Unified School District will be administering reductions in teaching services to district employees and in select programs at the high school. On top of retirements and resignations in various departments, the decline in enrollment has forced the district to reduce the staff in the social science and Chinese language programs.

Among other employees who are leaving the district, SPUSD is reducing the staffing of the social science program at SPHS by removing one full-time teacher and is also reducing staffing in the Chinese language program by one part-time position. Alisia Engelhard, who teaches Civics and Honors United States History, and Melissa Cheng, the instructor for Honors and Regular Chinese 3/4 and Regular Chinese 5/6, have both received notification that their positions will be reduced to ensure that the District retains a positive budget in the upcoming school years, at the objection of many students.

The cutbacks have come as a result of reduced enrollment in South Pasadena schools, in addition to a current eighth-grade class which is smaller than the departing senior class. The drawbacks in enrollment have presented the District with roughly $3.9 million in losses for the upcoming three-year budget, which will be presented to board members in June, and has lead to the decision to reduce the teaching staff at the high school. If the District failed to reduce the teaching staff and balance the upcoming budget, SPUSD would be forced to accept intervention by county officials to re-balance the budget.

The South Pasadena School Board voted to approve the reductions and give the teachers final notice in a board meeting on Tuesday, May 8.

Enright, who strongly supports the South Pasadena Teachers Union, described the reductions as “horrible”, saying, “Some people who taught Chinese wanted me to go to the board meetings and protest against the [action taken by the District]… There are a few teachers who think their program might be cut, and I think it’s horrible.”

When Enright informed the District that he was retiring, he was informed that there would not be a teacher to replace him and was told that the class sizes would be increased, “I partially felt good because if I hadn’t decided to retire they probably would have laid off an English teacher.”

Letter to the Editor: How Bingo is Changing After an Incident of Harassment