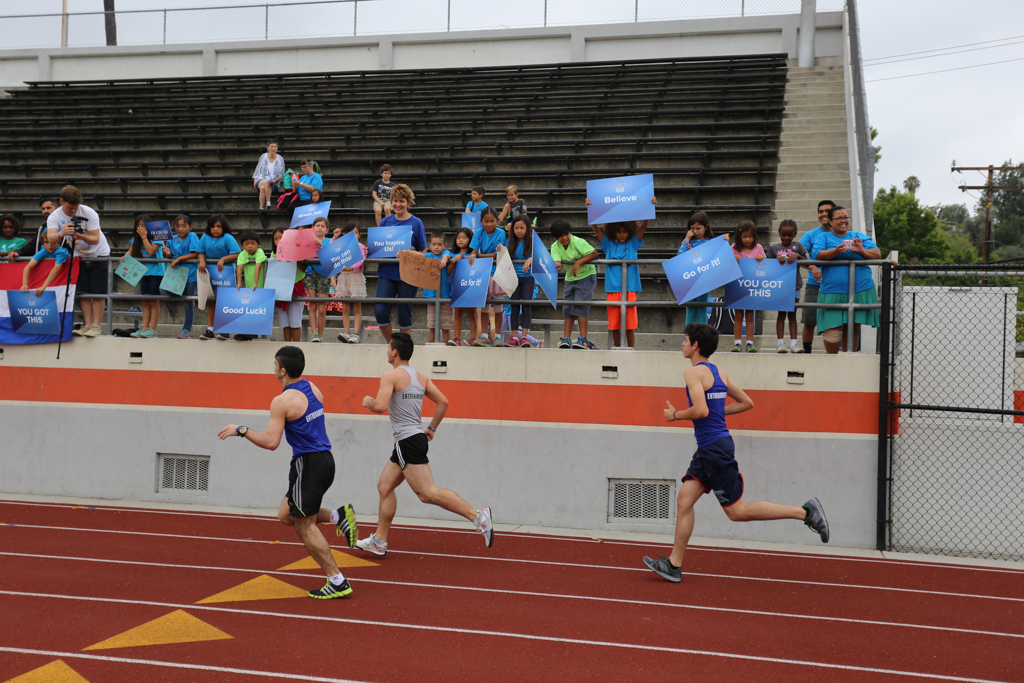 By Fiona Bock and Vaughn Huelsman

The Special Olympics athletes from Morocco and Paraguay got one of their first tastes of South Pasadena at a welcome breakfast hosted by the city’s Kiwanis club on Thursday, July 23rd. A mass of local volunteers prepared each delegate a hearty meal in preparation for a jam-packed day, filled with training, painting, and dancing.

“I was nervous about the upcoming events,” student volunteer coordinator Glenda Chen said. “But when I saw the athletes, it just made everything better.”

Glenda Chen and senior Christopher Chan pose with one of the athletes.

After breakfast, the athletes started their training at the South Pasadena High School field. Local elementary school children cheered them on as many of the runners rounded the track and other Olympians warmed up. The whole community worked together to create a hospitable environment for the visiting delegates.

“All of the events went well and each of the athletes felt very welcome and were grateful to recover from their arrival,” volunteer Arabic translator Soraya Benzakour said.

The two countries’ representatives then moved to Garfield Park where they and members of the South Pasadena community participated in creating a mural. Each person painted a piece of a large puzzle representing the coming together of the groups.

The Special Olympians spent the summer evening bonding and dancing with South Pasadena citizens and fellow athletes. Their athletic training has paid off even on the dance floor as they showed their impressive footwork.

“Even with the language barrier, I found that dancing is something we all have in common,” Special Olympics volunteer and senior Emily Ng said.

At the end of the night, each athlete was able to take home their artwork and a goody bag as reminders of South Pasadena for the 2015 Special Olympics.