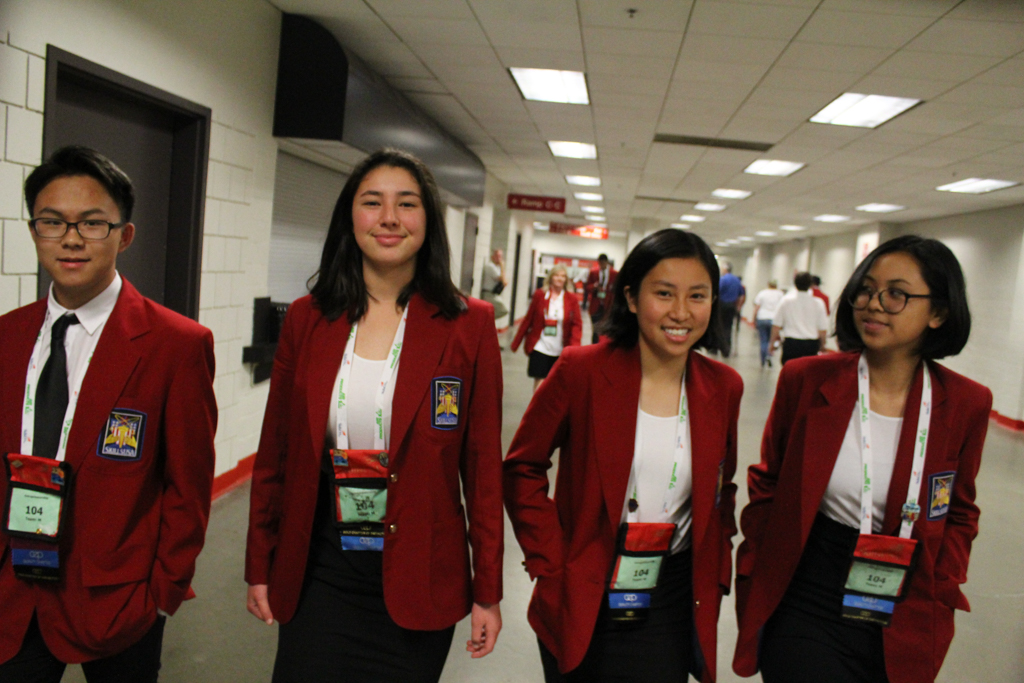 Four competitors from SPHS walk through the halls of the Kentucky Exposition Center, confident after months of preparation for their most important event of the year.

The SPHS SkillsUSA team joined over 6,000 other students from around the nation in Louisville, Kentucky to compete in the 53rd annual SkillsUSA National Leadership and Skills Conference from Tuesday to Friday, June 20-23. This competition was the pinnacle of the chapter’s work and training throughout the past school year and culminated with South Pas earning its second-ever national medal. Junior Victoria Venardi also made history by becoming the first-ever SkillsUSA California State President from SPHS.

South Pasadena had eight teams who advanced from the state conference to compete at the national level in categories ranging from Screen Printing to Computer Programming, all of which are a part of the high school’s CTE, Career Technical Education, program. Sophomores Natalie Deng, Danielle Choy, Brandon Lee and Hayley Villapudua were awarded bronze for their work in Entrepreneurship.

For Venardi, the road to becoming a state officer started long before nationals. After submitting a 15-page application, she had to pass a test and interview at the state conference. Subsequently, Venardi and all the other candidates engaged in a series of “meet the candidate” sessions as well as a few prepared and extemporaneous speeches. Delegates from schools around the state voted and at the end of the state competition, it was announced that Venardi would join five other students as California’s state officers.

A few days before the national conference started, Venardi flew to Kentucky to participate in Leverage, SkillsUSA’s state officer training and TAG (“Train, Act, Grow”) Tuesday. Here, state officers got involved in workshops and other activities aimed at helping them develop the leadership skills necessary in leading their respective states. State Officer Trainers evaluated the officers during these events and the national delegate sessions in order to assign specific positions such as president, vice-president, and secretary. Finally, during the California Congratulatory meeting at the end of nationals, Venardi was named SkillsUSA student president of California.

Between hard-fought competitions and delegate sessions, the SPHS students were invited to participate in special events throughout the conference, provided by SkillsUSA. The organization hosted a Champions’ Night on Tuesday where pop rock group Mikey Needleman Band performed at ‘Fourth Street Live!’. On Wednesday, SkillsUSA participants filled the Louisville Slugger Baseball Field to watch the Louisville Bats face off against the Columbus Clippers. The last night of the conference, SkillsUSA members were invited to continue the festivities at Kentucky Kingdom, a Louisville amusement park.

“When we showed up to our first orientation I was shocked to see [so] many teams competing. It was very nerve-racking but [we] felt confident with our team’s hard work. My team and I spent countless hours on preparing for our presentation and ended up winning 3rd place out of 23 teams,” Villapudua said. “I learned teamwork, improved my social skills, met new people, and overall gained more knowledge on how to start up a business”.