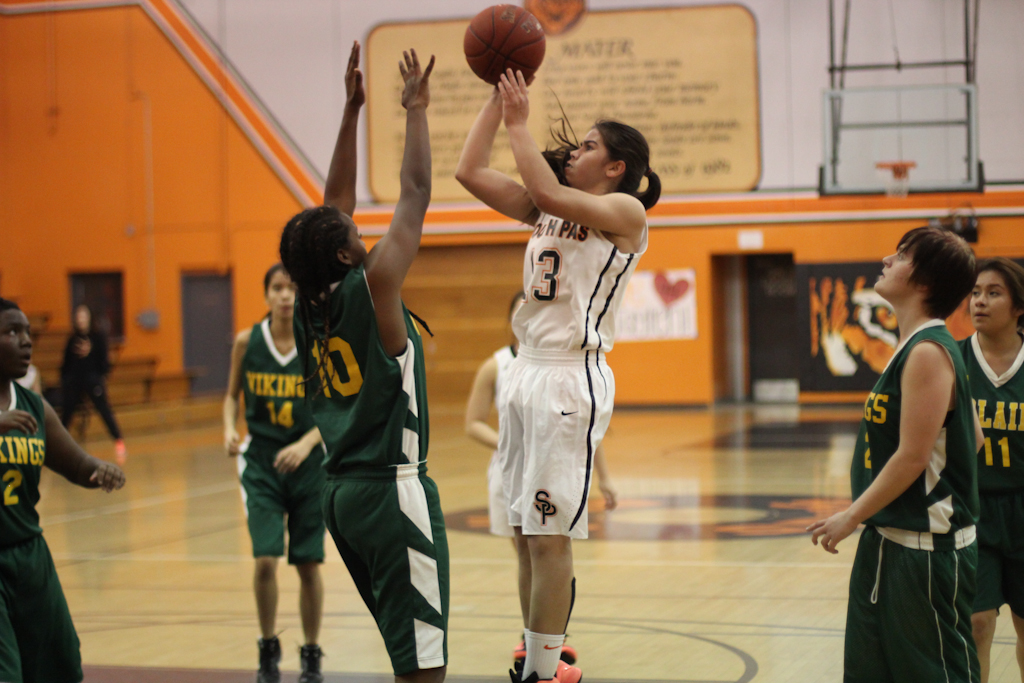 The girls took their sixth victory in Rio Hondo league after acquiring a 64-23 victory over Blair High School last Friday, January 30. The team remains standing first in league and determined to secure their position.

The girls took their time getting their offense straightened out against the Vikings when Blair sophomore forward Britne Brown took advantage of the lull and put two points on the board. The girls responded the next possession when junior Kristen Kafkaloff sunk a floater two pointer, followed by a steal layup from senior point guard Elise Takahama. The Tiger reacted very controlled to the Vikings and paced their offense to eventually set up senior guard Lexie Scholtz to power up two points. After a few possessions of tough defense, Kafkaloff stepped up the intensity with three more points added to the tally. Blair immediately fired back when Viking junior shooting guard Gabriela Manzano knocked down two free throws and senior center Beth Tamkin took a side lay-up to for a first quarter score of 15-6.

The Tigers kept up the speed of the game when Kafkaloff opened up for a three pointer. The girls kept up the offense by controlling the boards and outside shooting. Blair shooting guard Manzano managed a fast break for a quick two point and one, alongside an easy free throw. Senior guard Taryn Kato fired back with another two points for the team. Takahama trailed right after with a three pointer. The girls stepped up the tempo and increased their lead to 34-15.

With their lead up, the girls kept drilling the opposition the rest of the game. Takahama led the team with two free throws and put the girls on a 21-4 run, leaving Blair behind. The Tigers put more pressure on Blair to act and eased of to kill time off the clock and secure their victory.

“We were struggling in the beginning but pulled it together in the third quarter and made it work out in the end,” senior guard Natalie Song said.

The girls next scheduled event will be held at La Cañada on Wednesday February 4 at 5:15 p.m. The Tigers previous matchup led the Tigers to a 77-38 triumph over their school rivals

“With Sophia out, everyone had to play different roles and step up,” Head Coach Tammy Lai said. “It’s been good getting everyone into rotation as we begin our second round of league.”

Boys’ basketball bounces back with win over Blair