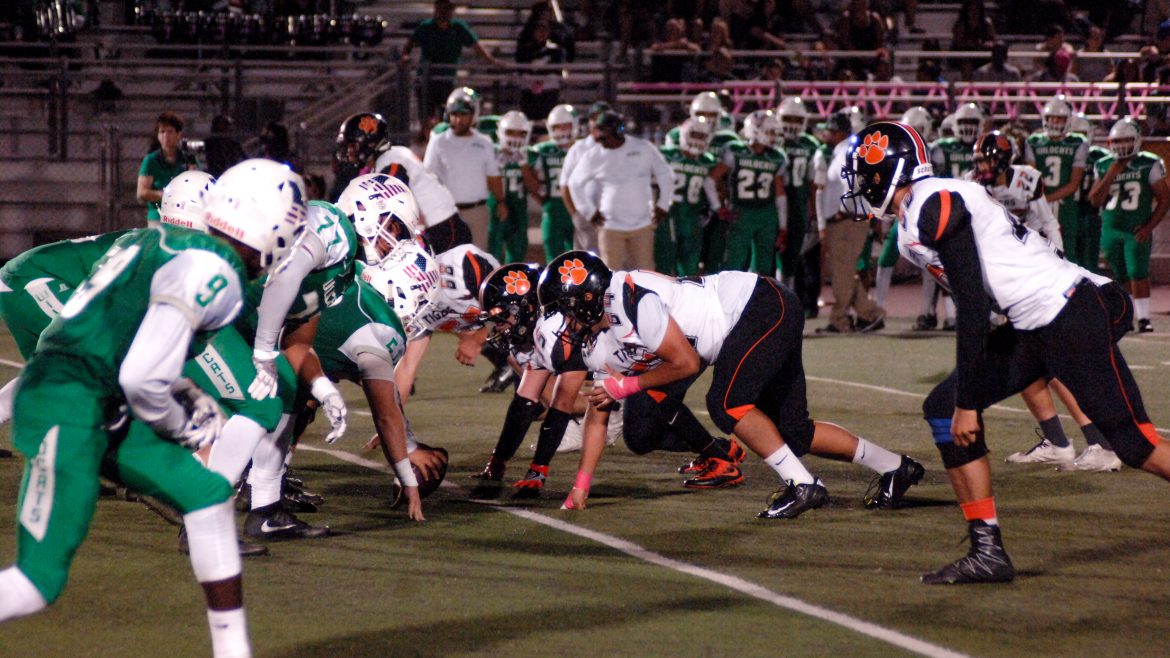 The Color Day spirit didn’t translate to the football field on Friday, as Monrovia handed the Tigers a 49-10 loss in the team’s league opener. The Wildcats, who were celebrating their homecoming, took the lead early and never let it go. Monrovia dominated the line of scrimmage throughout the entirety of the game and had the advantage on both sides of the ball.

Monrovia’s offense didn’t waste any time, scoring on a 66 yard run on its first play from scrimmage. After forcing a quick Tiger punt, the Wildcats struck again, scoring on a 30 yard touchdown run.

The Tigers stormed back down the field their next drive, using an effective passing attack to put seven points on the scoreboard. Junior quarterback Justin Huff and senior wideout Sidney Luna-Long connected twice on the drive, the latter on a 17 yard touchdown pass.

The Tigers mustered a field goal on their following drive, but a series of blown coverages and big runs allowed the Wildcats to push their lead to 28-10. A strip sack in South Pas’ endzone late in the second quarter gave Monrovia a 25 point lead going into halftime.

In the second half, South Pas was unable to organize any offense to get back in the game. The Wildcats continued to wear down the Tigers with their dominant rushing attack. Throughout the game, the Monrovia offensive line was able to open up holes for their elusive playmakers to run through.

“Their running back was a lot faster than some of the running backs that we have faced so far,” Coach Jeff Chi said. “It was very difficult for our guys to control that speed.”

On offense, South Pas was missing many key players due to injury, including the heart of their offensive line. The young and inexperienced replacements were unable to match up with the stronger Monrovia defensive line, hindering the offense’s advancements. Huff also exited the game in the second half with an apparent minor leg injury.

“They beat us to the punch right from the first play,” junior Jacob Barnes said. “During the first half we had our heads down, but we’re gonna come out on Monday and give it our all in practice.”

The Tigers will look to avenge the loss on Friday, October 13th, when they travel to Temple City to take on the 3-2 Rams.

Preston Sharkey
In his first year as a staff writer, sophomore Preston Sharkey is looking forward to writing for Tiger and sharpening his journalistic abilities. Having a strong passion for sports, Preston enjoys playing, reading, and writing about sports. When he is not in the gym or on the field, he is probably nervously watching Duke Basketball or re-watching The Office.