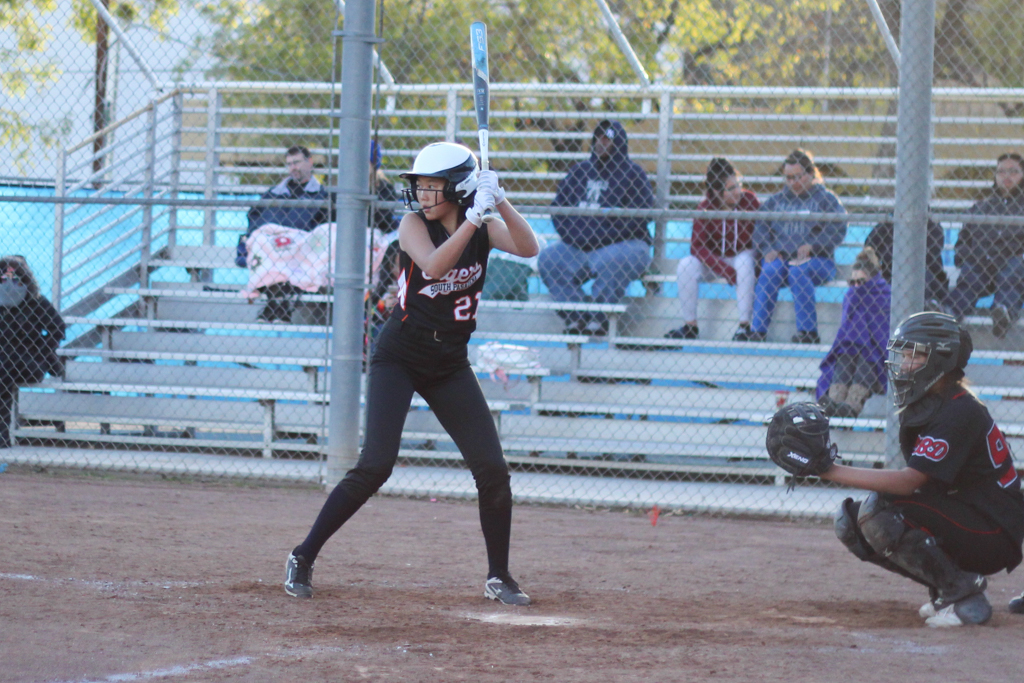 Freshman Carissa Park prepares to load back, anticipating a strike.

Softball continued its winless season on Tuesday, April 10 at Monrovia High School. Despite its defeat, the 9-4 loss is an improvement from the 15-4 downfall the team suffered earlier this month against the Wildcats.

Notwithstanding the team’s eventual loss, the first inning proved to be very successful. Sophomore Kat Castro led off the inning boldly with a bunt and advanced around the diamond due to a trio of walks. Senior Maddie Pearson was another beneficiary of the Wildcats’ inconsistent pitching, as she came home as a result of additional free passes. Freshman Cameryn Pearson contributed to the momentum with a strong hit to left field, which sent junior Katie Wooton home. By the end of the first offensive inning, the Tigers had a 3-0 lead.

This lead would be eliminated in the bottom of the third because of the Wildcats’ ability to hit strongly to left field. However, the Tigers responded quickly, regaining a 4-3 advantage in the top of the fourth. Senior Cathy Wang began the aforementioned South Pas comeback with a single. Later, with Wang on third, a defensive error on freshman Amanda Kanaly’s hit scored Wang.

Unfortunately for the Tigers, the combination of a potent Wildcat offense and South Pas’ struggles at the plate allowed Monrovia to gradually take the lead, and earn the victory.

“The overall energy of the team during today’s game felt higher and more positive than our last game,” said M. Pearson. “Losing by a closer margin was encouraging to the team overall, and while a loss is still disappointing, it showed us that we can compete and stay in the game which is promising for our remaining league games.”

It is this positive energy that the Tigers hope to bring with them to their next game against Monrovia on Friday, April 13.