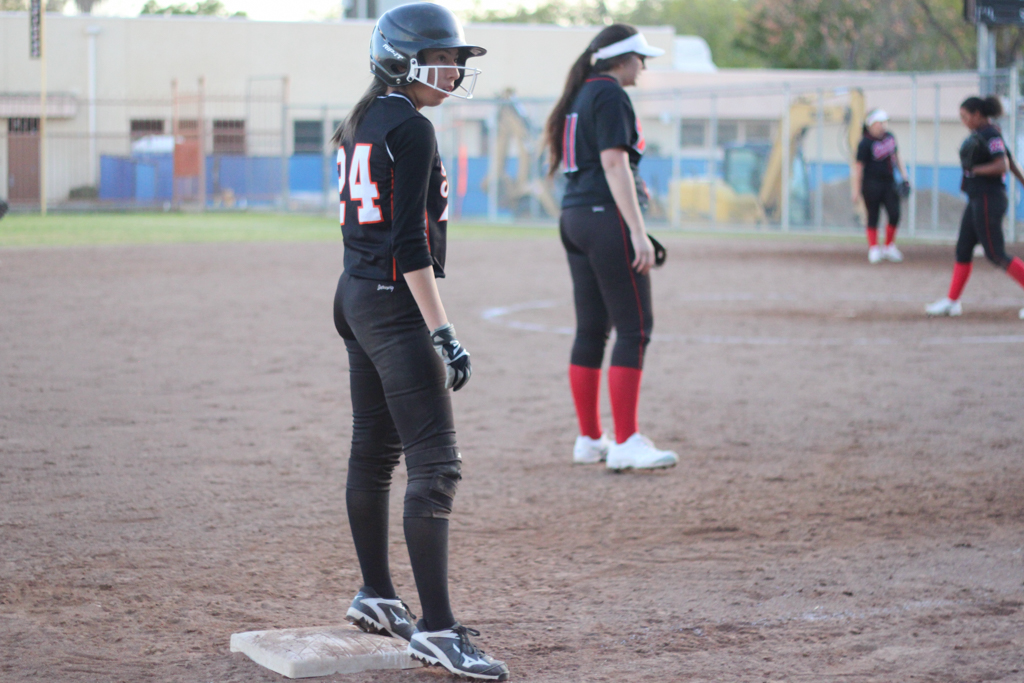 After a series of preseason game cancellations due to weather, softball began league play versus rival San Marino on Monday, March 19. Unfortunately, the squad fell – 9-8 – to the Titans, dropping their league record to 0-1.

The Tigers failed to get ahead of the curve with an unproductive first inning. However, their defensive prowess kept  San Marino’s offense in check. At the end of the first inning, the score was 0-0.

The stalemate was soon broken by a combination of San Marino defensive errors and strong South Pas hitting. Freshman Cameryn Pearson’s single to left field scored junior Catherine Connolly and advanced freshman Sarah De La O to third base. The next run was the result of sophomore Kat Castro’s single to left field, which allowed De La O to score and C. Pearson to move to third. The third run was tallied when freshman Amanda Kanaly’s bunt provided C. Pearson with the opportunity to score. At the end of the top of the second inning, the Tigers held a rare 3-0 lead over the Titans.

San Marino would quickly demolish South Pas’ lead by totaling seven runs in the bottom of the second inning.

Facing a four run deficit, the Tigers were unable to score in the third inning. However, in the fourth inning, Castro’s flyball to left field allowed De La O to score. Unfortunately, this was the only run that the Tigers scored in the fourth, but their strong defensive game held the score at 7-4.

In the fifth inning, San Marino’s aggressive offensive mentality was evidenced by stolen bases and hits to the gaps. Junior pitcher Anna Riffle was able to slow the bleeding, as the Titans were only scored two runs.

Castro opened the sixth inning with a double, and freshman Carissa Park followed with a walk.  A series of Titan errors allowed Castro to score and the Tigers to narrow the lead to 9-8.

The squads’ strong defenses prevented each other from scoring in the seventh.

The Tigers’ next game is Tuesday, March 20 at La Canada High School.