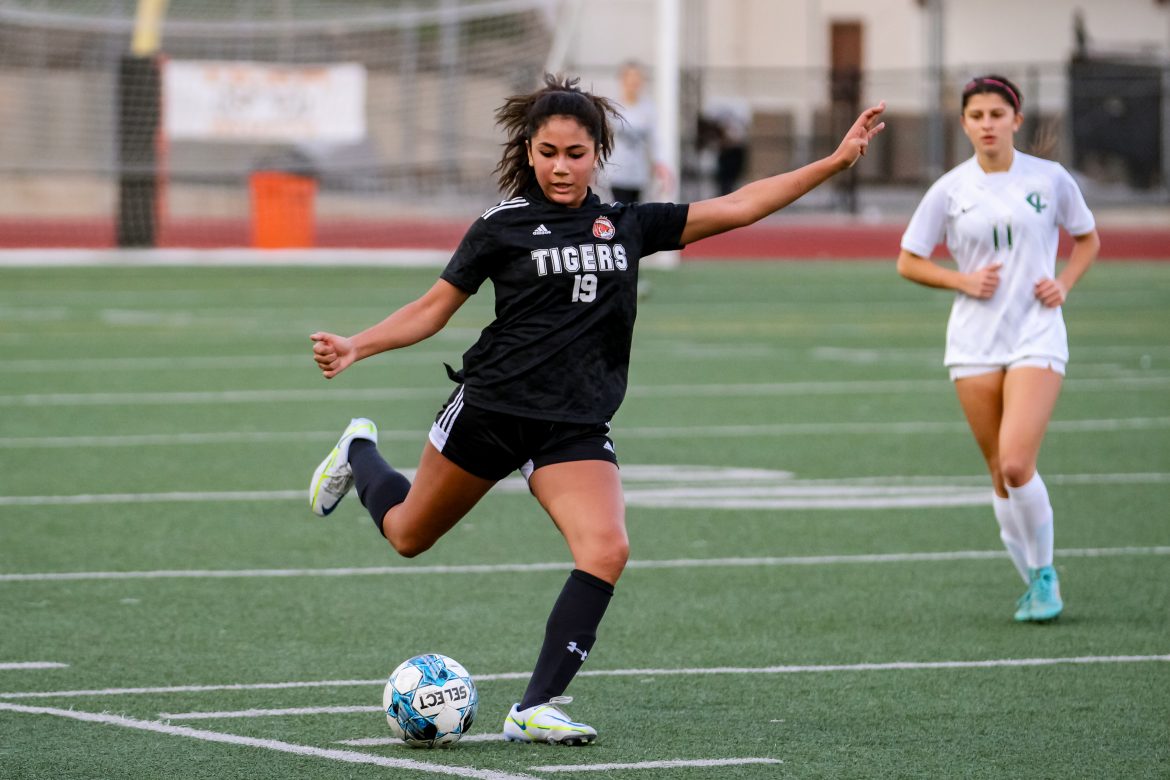 Falling into an early defecit, soccer couldn't mount a comeback and lost by three goals to their league rivals.

Girls soccer fell against the Temple City Rams at home on Friday, Jan. 13, losing by a score of 4-1. The Tigers dropped to a 7-1-1 overall record and a 2-1 record in the Rio Hondo League.

From the kickoff, the Rams were pressing into the Tigers’ defense from all sides. The Tigers played their roles but were too slow for the Rams, who weaved their way through the defense to shoot a goal early in the game.

From there, the play centered around defensive attacks again, until a pass to freshman Anna Kowal had the ball racing towards the offensive field. She shot the ball but was barely blocked by the opposing goalkeeper.

The Tigers continued to fight to push for offense, with junior Simone Assaf and sophomore Jacqueline Sides teaming up to block any attempts of the Rams’ advancement into their area of the field. However, the Rams’ defense was unrelenting, and the Tigers were unable to get any attack on the goal.

The Rams were able to force the play back towards the midline, and it didn’t stop there. The Rams ran with the ball through the Tigers and sophomore goalkeeper Ava Hartstein was alone to dive for the ball. She saved it, but the Rams gained possession and immediately shot again. The shot narrowly sailed past her fingers and got in the goal for the second goal of the game.

In the last ten minutes of the first half, it seemed like the two teams were locked in a stalemate. They wove through each other’s defenses plenty of times, and each tried to score goals. But each shot was deflected, and by the time the buzzer rang for halftime, the Rams led 2-0.

After halftime, both teams came back re-energized, and the Tigers seemed to be stuck in the same position — either team was at a stalemate, with the plays moving around the field at breakneck speed.

However, the Tigers soon had a stroke of luck when Hartstein dove for an incoming shot from the Rams and blocked the ball. The Rams got in possession of the ball again immediately, but she blocked the second shot and got it back in the hands of the Tigers.

In the next play, Kowal dribbled the ball down to the opposing field and took her chance. She shot the ball towards the goal, which sailed through the air and cleanly into the net — giving the Tigers their first goal of the game.

The Tigers pushed against the Rams towards the opposing field in this turn of events, but the Rams manage to break through the defenses and travel to the defending field. Hartstein had run out of the goal box in an effort to help the team, so she was unprepared for the ball that sailed over her head and into the goal.

In a battle for possession of the ball, the Tigers suffered a foul from the Rams and were awarded an ensuing penalty kick. Junior Iris Pollard went to perform the kick, but after a moment of preparation, the ball sailed left and missed the goal.

The last half of the game went back-and-forth between the two teams, but the Rams managed to get the ball through to the defending side. Although Hartstein reached to block the ball, it managed to scrape by into the goal for Rams’ fourth point.

While the Tigers managed to push past the Rams’ defenses, the Rams also gave as good as they got. Both sides took every opportunity to make a shot at the goal, but even with excellent communication and passing, the buzzer signaled the end of the game with no new scores made. The final score of the game ended up 4-1 in favor of the Rams.

“I’m proud of the way the team carried themselves during and after the game and their eagerness to continue growing and developing as a team,” head coach Jeremy Gonzalez said. “We stayed composed throughout the game, controlled the ball, created scoring opportunities and showed character and heart to the very end.”

The Tigers will be facing the Blair Vikings on the road on Monday, Jan. 23.