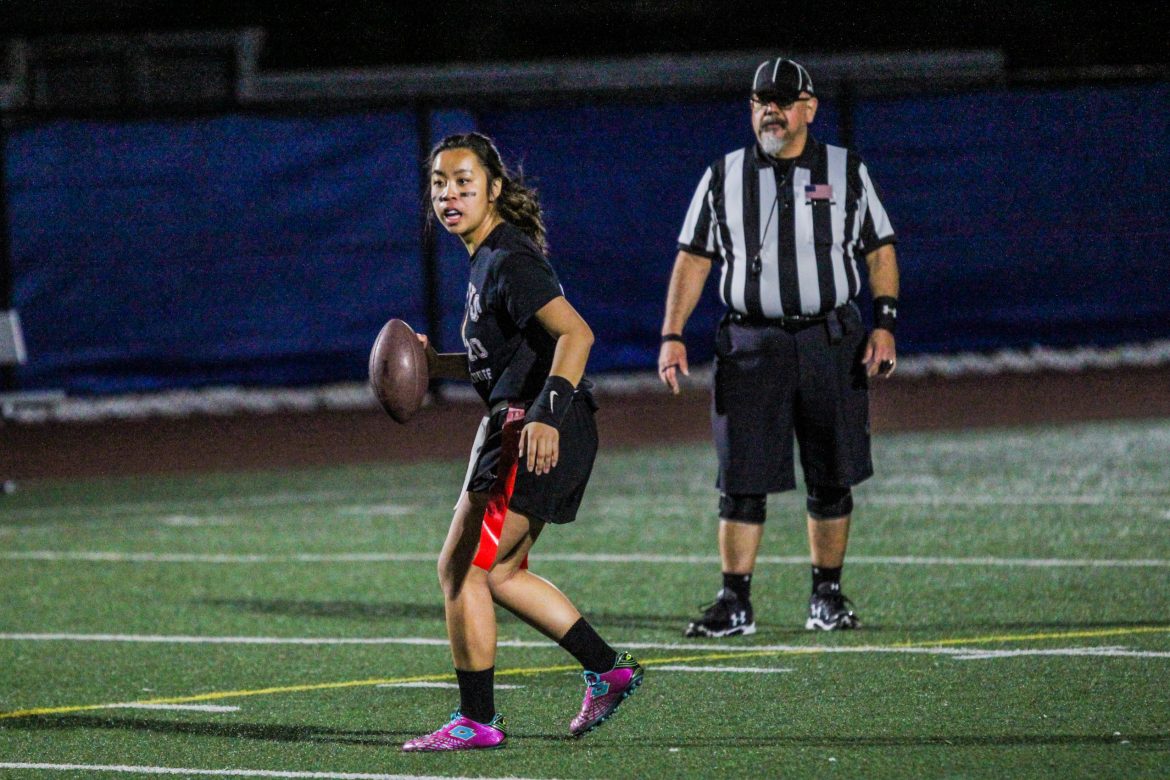 The seniors ran away with a victory in the annual Powerpuff game on Friday, Feb. 28, leaving the juniors behind in the dust, 48-27. The teams battled hard throughout a tight first half, but the Class of 2020 broke away for the blowout win. Senior Jewel Nguyen led the way with 268 passing yards, 57 rushing yards, and six touchdowns, while junior Kate Buckley racked up 194 receiving yards and a trio of touchdowns.

The two classes started the game off trading possession back and forth. However, the seniors established their dominance early. With a combination of speed and agility, the seniors’ strong running offense took a 12-0 lead. Ngueyn kicked off the game with a five-yard run touchdown and fellow senior Teryn Kum dashed for a 26-yard run score.

Midway through the half, the juniors began to make a comeback. The Class of 2021 found its first score of the night with a pass from Kendall Verkuilen to Buckley. Verkuilen finished with 230 passing yards for four scores.

The juniors continued to feed Buckley, but the seniors solid defense held and ended the quarter with a one-score advantage.

Well into the second quarter, the juniors scored another passing touchdown. Verkuilen hit an open Buckley again to bring the score to a tight 13-12, with the seniors falling lightly behind. The Class of 2020 stepped up its game, finishing the first half off with another 16-yard rushing touchdown from senior Corey Segal, which put them ahead, 20-12.

The third quarter brought more energy from the classes with an almost immediate touchdown from junior Sydney Abundo. Now deep in the third quarter, Verkuilen and Buckley linked up once more for another passing touchdown to cut the senior lead to 20-18.

With the time ticking down, Nguyen stepped up with an astonishing 33-yard touchdown toss, lifting the seniors ahead, 26-18. Nguyen began to take over the game in the fourth quarter as the seniors collected more points; she threw for two more scores, including a 48-yard bomb.

The juniors saw their disadvantage and intensified their play by adding another receiving touchdown from Kate Buckley pushing up the score, 42-27. The seniors capped off the night with their final attack, resulting in a 22-yard touchdown lob to Hannah Thompson.

“I think we put up a good fight. Towards the end of the game, the seniors anticipated the plays we were going to make and it was hard to advance,” Verkuilen said. “As for next year, I think with more practice time and a better understanding of the game, we can go out and win.”

Track and field excels against Alhambra