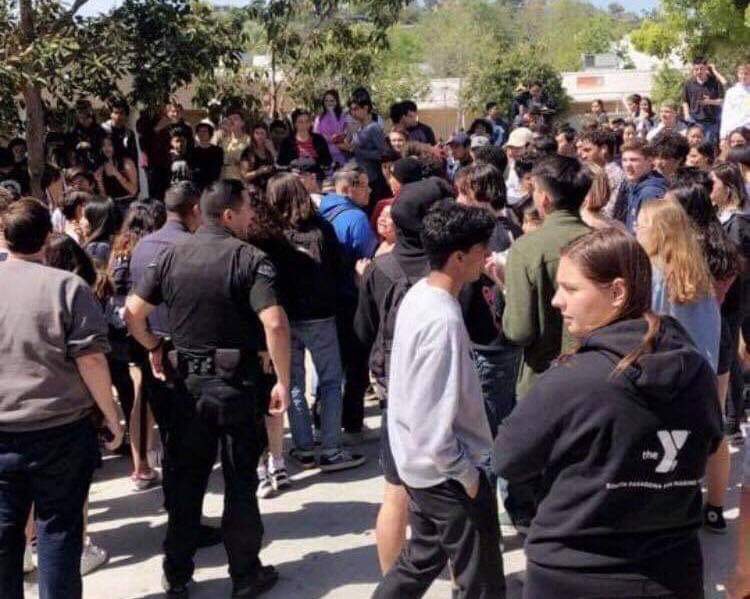 Administrators escorted numerous sophomores and seniors to the office, while three South Pasadena Police officers moved the crowd away from the area. SPHS administration is currently investigating the incident.

A physical altercation between a group of seniors and sophomores broke out during lunch on Friday, Mar. 29. Members of the senior class were observed throwing water balloons at underclassmen, which led to an alleged pepper spray attack that sent multiple students to the health office.

The senior prank suddenly began minutes into lunch with students launching water balloons and spraying Silly String at their peers. Some fled the scene, while others ran into open classrooms to avoid the attack. A group of sophomores was said to have thrown food at the seniors in retaliation. According to eyewitness reports shared with Tiger, a senior was poised to spray sophomore students with Silly String when a sophomore allegedly pepper-sprayed the senior in the face. The pepper spray mist affected multiple bystanders.

Administrators escorted numerous sophomores and seniors to the office, while three South Pasadena Police officers moved the crowd away from the area. Bystanders were held out of sixth period for further questioning and the students affected by the pepper spray received medical treatment from South Pasadena paramedics, who were called to the scene.

Witnesses told Tiger that the altercation was created from an ongoing squabble between the two classes due to suspecting stares from the sophomore area. Before Senior Prank day, rumors of the planned prank circulated, saying that some seniors were going to fill water balloons with bleach and vinegar. These seniors would then throw the balloons at the other grade levels in the quad.

When Senior Prank day arrived, some seniors painted the seats of lunch benches in the freshman area with fresh black paint. Since the benches are already black, unsuspecting students sat on the wet paint. Other seniors allegedly released crickets into the library.

SPHS administration is currently investigating the incident and declined Tiger’s request for an interview as of Friday afternoon.