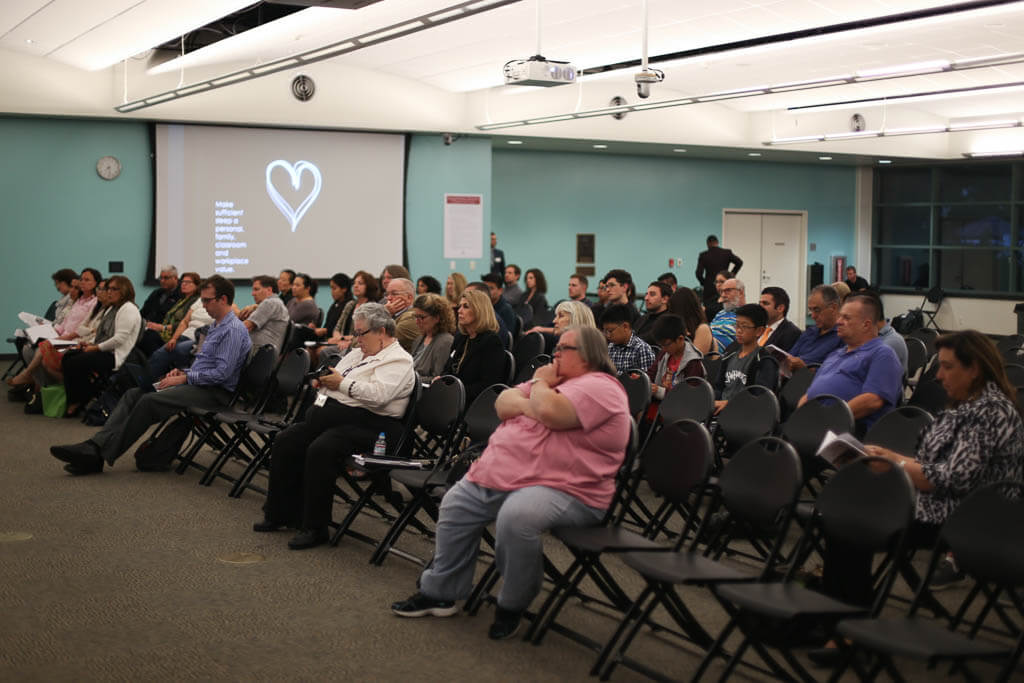 Interested residents meet at Creveling Lounge to participate in the discussion.

SB 328, introduced in February, would require all California school districts to start school days no earlier than 8:30 am for secondary schooling. Portantino was the first to propose this statewide measure, utilizing the bill to address increasing health concerns around adolescent sleep deprivation. His citations of the American Pediatrics Association’s 8:30 recommendation were further explored through three research presentations from sleep educators and medical professionals(Center For Disease Control, American Pediatrics Association).

Each researcher delved into the benefits correlated with later school start times: natural sleep patterns, increases in GPA/standardized testing scores, better attendance rates, and fewer discipline referrals. Presentations also highlighted the overwhelming evidence around the effects of sleep deprivation in student life. Dr. Linda Schack and Terry Cralle examined the REM sleep cycles and teenage health on the early/later schedules, displaying brain delay parallels between those induced by alcohol and lack of sleep. Cralle cited Wahlstrom’s study, which, after the time change, showed a 70% decrease in teen car crashes, the leading cause of adolescent death.

Though responses from local administrators have exhibited strong support, the California School Boards Association and local boards have voiced opposition around the legitimacy of positive impact on students. School districts such as SPUSD have continuously revisited the barrier of coordinating athletic events and after-school activities with neighboring schools. Portantino and CAPTA member Patty Scripter emphasized their direct solution to the problem: statewide action through SB 328.

Dr. Kyla Wahlstrom, who has dedicated the past 20 years of her career to studying late start implementation in Minnesota, specifically addressed this point in addition to parent work schedules. Wahlstrom separated the issues into real and unsubstantiated, citing data from over 100 Michigan schools of diverse demographics.

“Our researchers were outstanding; the data really speaks for itself. The people here today are leaving understanding what [the bill] talks about,” Portantino said. “It’s a ripple effect that I really want to continue to build, and talking to teachers and students like these is going to keep the momentum going.”

During the Q&A session, Portantino and the research panel received positive feedback from the community in addition to questions regarding overall benefits of SB 328. The panelists reinforced the natural adolescent sleep schedule and improvement of school culture, encouraging attendees to emphasize the bill’s importance.

The presentation really opened my eyes that there is a health crisis affecting teens because of the lack of sleep they get,” South Pasadena resident Mickee Collins said. “As a parent of teens, I support the first step to informing the public that Senator Portantino is taking [with this bill].