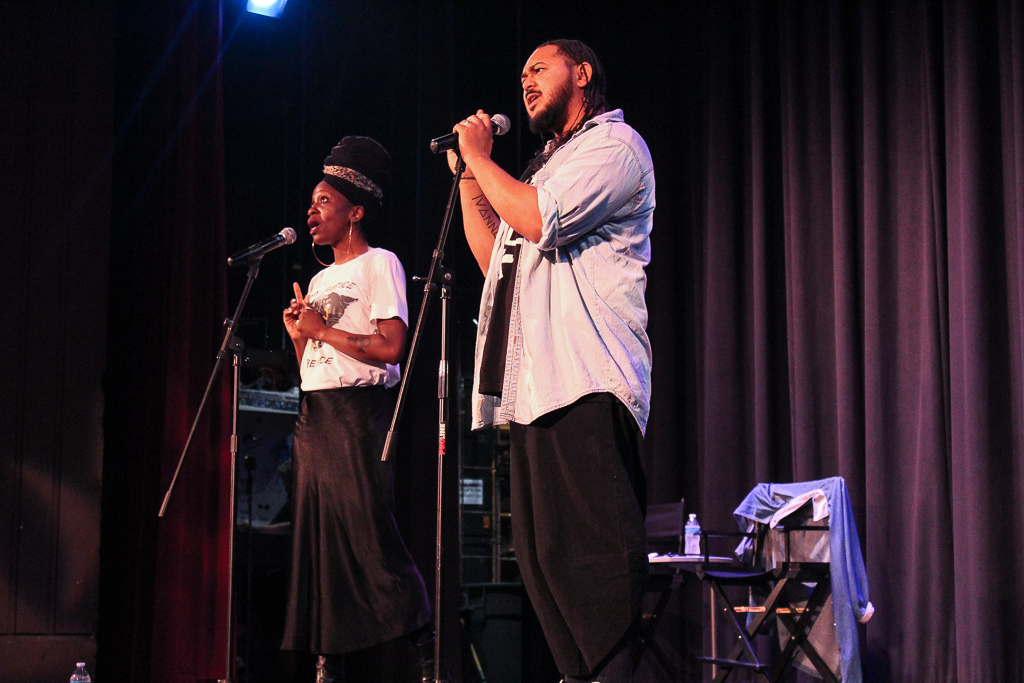 Poets Matthew "Cuban" Hernandez and Alyesha Wise emphasize the unjust treatment and representation of minorities in their piece "How to Survive an American Horror Story."

Students attended the annual Tiger Reads assembly on Friday, Sept. 27, to hear poetry focused on the themes of Angie Thomas’ The Hate U Give. Featured poets Matthew “Cuban” Hernandez and Alyesha Wise told their stories about oppression, privilege, and hardships as people of color in America.

Cuban began with “Failure is Not an Option,” a piece that centered around his childhood and growing up in an underprivileged community. Wise also continued with this theme and touched on issues such as her faith and trauma as a black person growing up in Camden, New Jersey.

Wise and Cuban also performed a joint piece, “How to Survive an American Horror Story,” that focused on minorities’ representation in media and treatment in America today. They detailed the stereotypical tropes of minorities in horror movies, such as the “token black friend” and “non-white minority,” that will always die at the end of the story and how the “bigot will most likely survive the entire ordeal.”

Wise and Cuban’s based their poetry on SPHS’ summer reading book, The Hate U Give. The book centers around Starr, a teenage girl who grapples with oppression, racism, and police brutality after witnessing her black friend being shot by a policeman.

Wise and Cuban highlighted themes of hardship and systematic oppression in their poetry, however they wanted to send a positive message of embracing your differences and improving on oneself despite challenge.

“Growth doesn’t happen comfortably. When you find yourself in an uncomfortable situation you’re usually growing, whatever it is you’re going through,” Cuban said. “Just know that when you are having your hardest times, you are usually going through your biggest growth.”

Wise and Cuban grew up in underprivileged neighborhoods in Camden, New Jersey and Jacksonville, Florida, respectively. Both found poetry as an outlet to tell their stories of trauma and hardship.

Cuban treated SPHS students at the end of the assembly, giving out nearly 250 free copies of his poetry book 3032 with the challenge that in the future the students write their own stories and books.

Cuban and Wise hope that sharing their stories growing up in the hood and the obstacles they faced will inspire students to share their own stories.

“[I want you] to find your magic. If you find something that really makes you let out all the things [you] hold in, try your best and stick to it,” Wise said.