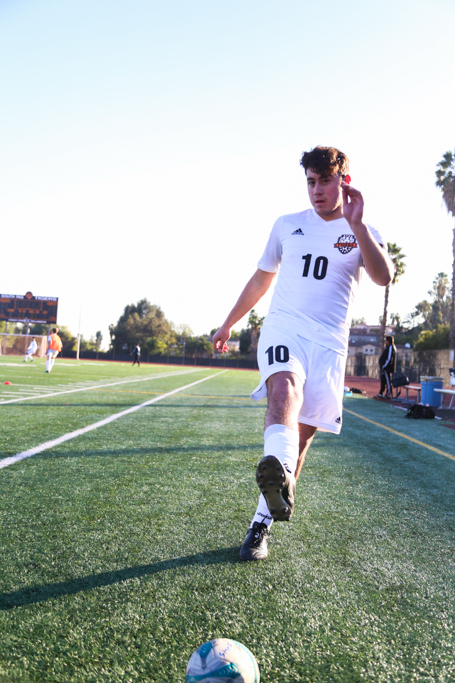 Senior Oskar Hernandez lay on the ground writhing in pain with a broken leg after a hard collision in last year’s CIF Finals against Monrovia. Hernandez is now back on his feet and continues to be the focal point of his varsity soccer team as team captain and attacking midfielder.

Hernandez says the toughest challenge was not the physical obstacles itself, but rather the mental barriers that they created.

“In the moment of the injury, it obviously hurt and I was devastated when I realized that I wasn’t  able to get back into the game,” Hernandez said. “Now, even though I know that it wasn’t my fault at that time, I still felt like I had let my team down.”

Months later, Hernandez began to doubt himself and his abilities in soccer. Hesitation in fundamental behaviors such as slide tackling was detrimental to Hernandez’s confidence in his damaged leg. But his family members still believed in him, even when he lost faith in himself. His grandfather, for example, encouraged him to persevere despite  the injury, and to be motivated to improve both the strength in his leg and his soccer skills. Hernandez’s grandfather, who introduced him to the sport, inspired Hernandez with his own struggle of tough circumstances in El Salvador, including playing barefoot with a soccer ball made out of socks.

The Tigers’ coach, Juan Zurita also played a significant role in Hernandez’s rehabilitation. Since both noticed that Hernandez would not be ready in time for the season, Zurita suggested he adopt a simpler playstyle and take on the role of facilitator rather than attacker.

Hernandez is grateful to be back in action for this season and relieved that he can once again play the game he loves. Though his leg has not fully regained its strength, he continues to train while clinging onto the determination and hope he has found during his struggles.