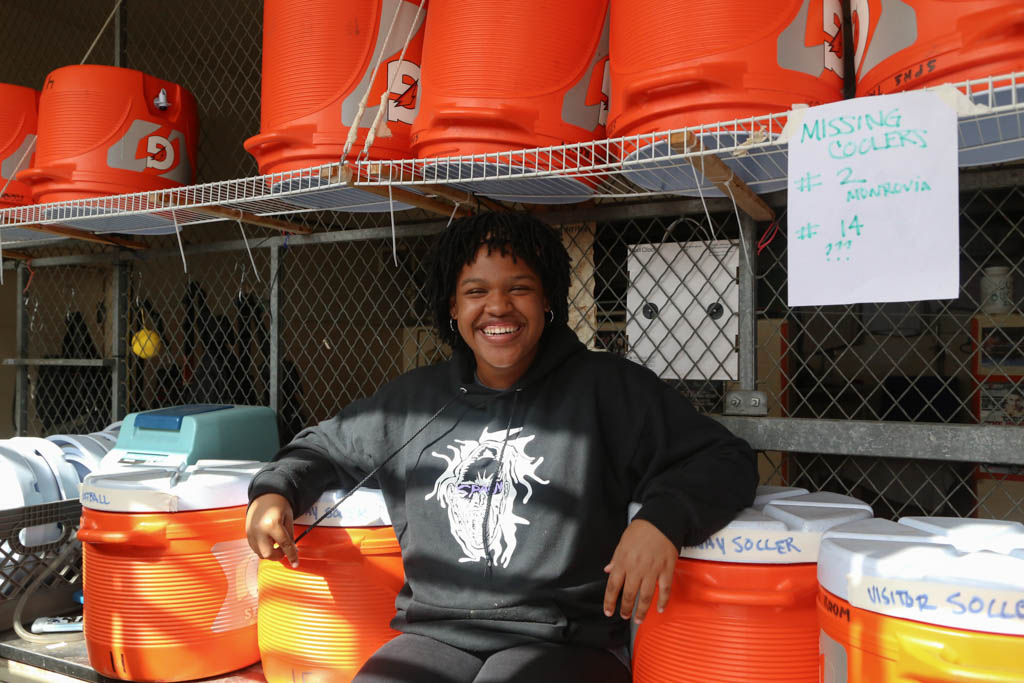 In honor of Black History month, Tiger will be recognizing black students at SPHS, featuring one student each week. This is part one in a series that aims to highlight largely unrecognized black achievement in the community. See Tiger’s February 9 issue for print content that parallels this series.

Junior Ava Planer fell in love with sports medicine during a football game last semester, as she watched a player dislocate his shoulder.

“[The athlete] was in so much pain but I just couldn’t stop laughing, I was so excited. That’s when I knew I wanted to do sports med,” Planer said.

Planer has spent the last semester devoted to the sports med program, spending up to four hours a day taking care of student athletes at both home and away games. Her responsibilities include assessing and treating players’ injuries, spoon-feeding football player Jaylen Ross mustard to prevent cramps, and giggling at the occasional dislocated shoulder. Planer’s enthusiasm is one of her most endearing qualities. Her exuberant laugh can be heard from across the field. Beyond high school, Planer aims to make a career of her passion and travel the world as a sports med trainer.

Planer’s interests extend beyond athletics. Each Thursday, Planer leads the South Pasadena and San Marino Youth and Government delegation in icebreakers, cheers, games, and bonding activities as delegation chaplain. Planer hopes to become even more involved in the program as she moves into her 6th year as a committed delegate.

“Youth and Government is an accepting community. It feels like a safe space because I am with like-minded people. I love everyone in Y&G so much!” said Planer.

As well as the social aspect of Y&G, Ava likes being up to date about political issues and current events. She wishes to take her passion for politics outside of the youth program, but feels her involvement is limited by the color of her skin.

“Black activists are in so much more danger than white activists. I get involved to an extent, but it’s just not always safe,” Planer said.

Planer wishes to follow in the footsteps of other black activists, her favorite role models being the entire Obama family. She loves how Barack Obama “wasn’t petty” while in office and believes that Michelle went above and beyond to help the American people during her time as First Lady. Planer admires the way Sasha and Malia Obama “kept it together” in the White House despite the extreme scrutiny and racism they faced. Her list also includes everyone from humanitarian Harriet Tubman to modern pop culture icons such as Beyoncé and Zendaya. Though Planer has many famous idols, she struggles against isolation within her own community.

“As a young girl growing up in South Pasadena, there is a lack of representation. I mean, I can count on my hand the number of black kids who go to our school,” said Planer.

To Planer, Black History Month is all about representation. She appreciates the recognition of black leaders during this month, but is frustrated by the lack of year-round acknowledgement for black Americans. Planer believes that black history needs to be consistently integrated into schools’ history curriculum, which she describes as very euro-centric.

“All cultures should have more than just one paragraph explaining their history,” said Planer.

Planer feels that Black History Month draws attention to the great divide between black people and white people in the U.S. and helps contextualize black culture to Americans. Planer believes that celebrations like this can help bridge racial divides and inspire a more united nation.