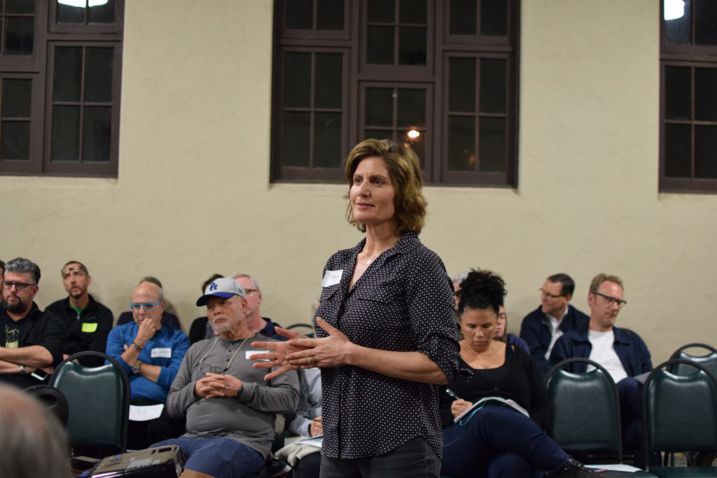 Efforts to resist and protest the new Trump administration have been gaining size and momentum in the South Pasadena community. Out of the growing movement, a newly formed group is seeking to make changes outside of the boundaries of the city.

The grassroots group South Pasadena Indivisible, formed by citizens who have been organizing protests on Fair Oaks Avenue, seeks to take action in resistance efforts. More than 85 people attended SPI’s first meeting on Wednesday, February 15, at the South Pasadena Public Library’s community room, to set goals for the organization moving forward. The South Pasadena group is one of many Indivisible groups around the nation that follow a guideline created by ex-Clinton campaigners. Indivisible aims to emulate the kind of resistance the Tea-Party movement created to oppose former President Obama.

Organizer David Beadle started off the meeting, making clear the proactive goals of the group.

“Now that Trump [is president], I have been going through the five stages of grief,” Beadle said. “Now I’m at the stage of acceptance, and it’s time to do something about it.”

Beadle, a politically involved South Pasadena resident, acknowledged efforts to resist the conservative federal agenda, but expressed the need for involvement in communities that are not already strongly liberal. Group members then expressed concerns over various topics such as health care, immigration, and education, outlining goals to focus on.

At the moment, South Pasadena Indivisible’s primary focus is on the 2018 midterm elections. The group wants to influence Republican congressional districts to become democratic. One such district is Palmdale, which voted for Hillary Clinton in the 2016 election, but elected a far-right congressman by a relatively slim margin. SPI plans to work with the Simi Valley Indivisible group to elect a democratic congressperson: a realistic goal that will have big impact, according to co-organizer Martin Albornoz.

In the meantime, SPI members will continue to share and participate in local protests and events. The facebook page for the group is regularly updated with upcoming protests and demonstrations. Most notably, the group plans to attend a town hall hosted by Republican Congressman Steve Knight, in the Simi Valley area. SPI plans to join with other similar groups at the event, and put pressure on the congressman, who has come out in support of President Trump.

After the meeting in the library community room convened, the attitude of concern and anxiety that had initially dominated the room was replaced with an air of reassurance.

As Pasadena resident Dianne Burr left the meeting, she stressed the importance of unity when approaching other communities who might have differing political inclinations. Burr participated in the Civil Rights Movement in her youth, and is now focusing her efforts and time on contributing to resistance movements.

“We need to take a stand now because our time is of great peril and division,” Burr said.