Nadia Lee Cohen’s “Women” studies the drama of the mundane 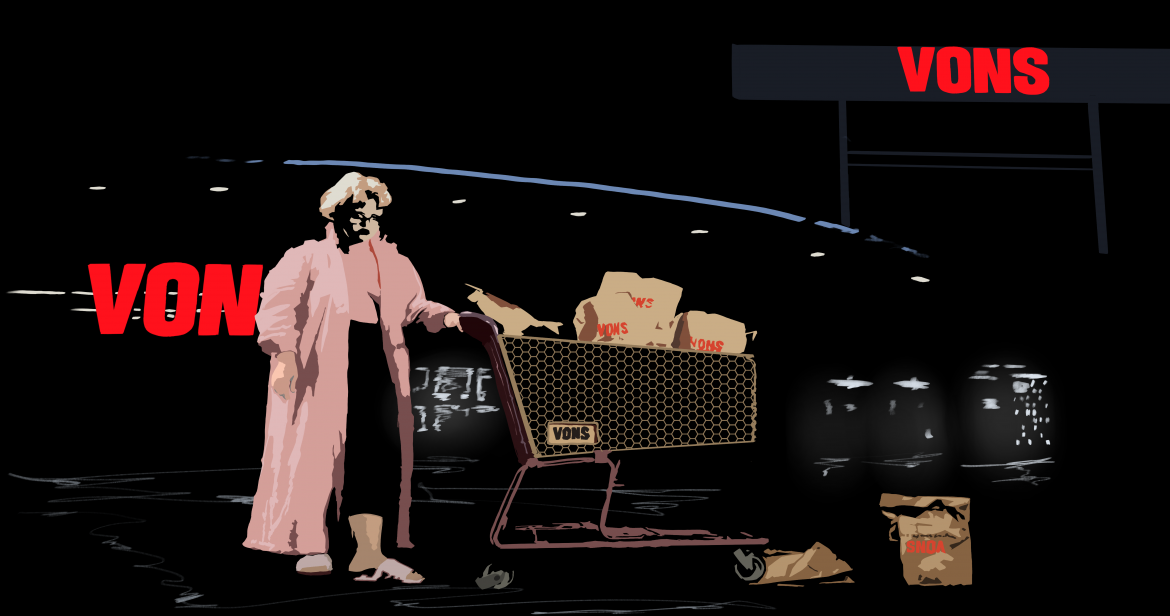 A crinkled paper grocery bag lies upside down in an empty parking lot. A Redbox DVD rental stand flickers in the distance next to a couple of Glacier water machines. Although only an image, one can imagine the lyrical chirp of crickets, the gentle whirr of the water machine, and maybe an occasional car passing by. The protagonist of the image — a woman wearing little else but a pink bathrobe and an oddly-placed blonde wig — stares pensively at an object in the distance, illuminated by the fluorescent red glow of a Vons sign. The image described is Vons, captured by photographer Nadia Lee Cohen.

Vons is the perfect introduction to Cohen’s body of work. It encapsulates many of the themes she touches on in her work such as femininity and hyperconsumerism — but above all the image has an incredibly complex narrative, a narrative that distinguishes Cohen from her peers. When I stare at Vons, I can’t help but imagine all the millions of circumstances that led the protagonist to this very moment, and I keep coming back to the picture because there’s something new to notice each time.

Despite American culture being a very central theme in her work, Cohen herself is actually not from America. Born in a small town in the countryside of England, Cohen cites the works of Harmony Korine, Stanley Kubrick, and David Lynch as her initial photographic inspirations. In fact, a particular scene from The Shining inspired her portrait “American Nightmare,” which received the National Gallery, London’s Taylor Wessing Portrait prize, which helped fund her trip to America.

Cohen’s work evokes a deep sense of nostalgia, perhaps because of the 50’s and 60’s themes she draws on. Yet, her work does not feel driven by nostalgia. Instead, it revitalizes vintage aesthetics by adding a relevant, modern feel. This is likely because of her subjects. Cohen states that she prefers to use normal, “imperfect” people in her photographs. In fact, in a beauty pageant themed editorial, each of her subjects had some obvious “imperfection” whether it be a unibrow, crooked teeth, or an oddly-shaped nose. The culture in 50’s and 60’s postwar America was a culture that demanded conformity, and Cohen rebels against this idea by rejecting ideas of perfection and modesty while simultaneously exploring the aesthetics of the era.

Although these themes are present throughout much of her work, the photographs included in her recently published book Women explores the beauty in mundanity. Inspired by these aforementioned 60’s and 70’s motifs with a touch of Old Hollywood glamour, Cohen poses her models casually in domestic settings. Despite the plain backdrop of these portraits, all possess a dramatic flair, from the theatrical lighting, to the gaudy makeup, or maybe the fact that most of her models are at least partially nude.

Another striking aspect of the images featured in Women is their many layers. Each image elicits a strong reaction upon first looking at it, whether that be shock, joy, or disgust. However, under all the layers of emotion in her images is often a strong sense of melancholy, maybe even nostalgia. In one image, a woman sits breastfeeding her baby at a kitchen table. The 70’s mod-esque kitchen is perfectly decorated, the woman’s hair and makeup perfectly manicured. Despite all the glamour that surrounds her, the woman stares into the distance with a glazed look over her eyes. She looks exhausted, and probably is.

The multidimensional aspects of her subjects contributes to the overarching theme of Women: the ambiguity of humankind. Throughout her body of work, yet especially in Women, Cohen blurs the lines between what can be beautiful, unsettling, and gross. In “Portia, Inland Empire” a woman in heavy makeup and a well-tailored suit jacket stands plainly in what looks like a reception area, yet the atmosphere about her seems so sterile, as if all the air had been sucked out of the room leaving the viewer with an almost unnerved feeling.

Cohen’s Women could not have come at a better time. At a time where women’s bodies are so heavily censored on social media, Women is a breath of fresh air. To see women posed so casually in the nude is a reminder that our bodies are nothing to be ashamed of, in fact, they are something to celebrate. Seeing the images in Women make me so incredibly proud to be a woman, whatever that may mean.