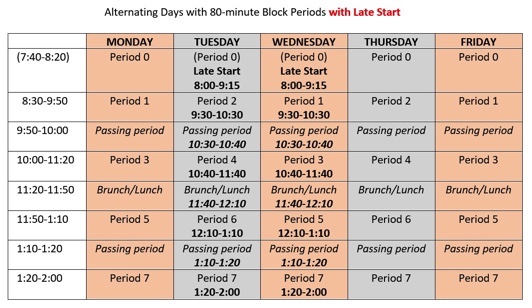 Late starts will begin on Jan. 5 and run on Tuesdays and Wednesdays twice a month in the second semester until Wednesday, May. 19.

SPHS’ second semester will feature bimonthly sets of late start days where students begin hour-long Zoom classes at 9:30 a.m., according to SPHS Principal Janet Anderson in the PTSA’s weekly newsletter on Monday, Dec. 14. Unlike first semester, there will not be any department negotiated asynchronous days for the second half of the school year.

Second semester late starts will resemble the traditional in-person ones in that they will happen on Tuesday and Wednesday twice a month each, and will designate time for staff development and meetings while students are off. Breaks between Zooms will be pushed back accordingly, with lunch lasting from 11:40 a.m. to 12:10 p.m. Students will finish school at the same time they currently do.

For some students, late starts represent a return to normalcy after already adjusting to school on Zoom and added department asynchronous days in the first semester.

“I prefer late starts over asynchronous periods because they’re more regular and give you a chance to sleep in,” junior Miranda Liu said. “With [asynchronous] periods it was very random and hard to keep track of.”

However, other students worry that having only late starts twice a month will not be enough considering the stress of distance learning coupled with the impact of the coronavirus.

“With the pandemic worsening, it is becoming so hard to manage real life and school work. Both my parents are in the high risk group and I worry a lot about them,” junior Julie Frias said. “I feel like the school forgets the world is not normal right now and can’t hold students to the same expectations as they did last year. I don’t know how the school expects me to perform to the same standards when I worry constantly about my parents’ health and if they could die.”

For many students, the asynchronous periods were already insufficient in helping to ease stress and improve their mental health during online school, but the thought of only having late starts in the second semester seems even worse.

SPHS’ first late start is planned for Tuesday, Jan 5. A complete schedule is below. 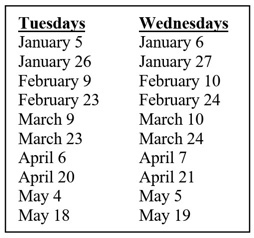