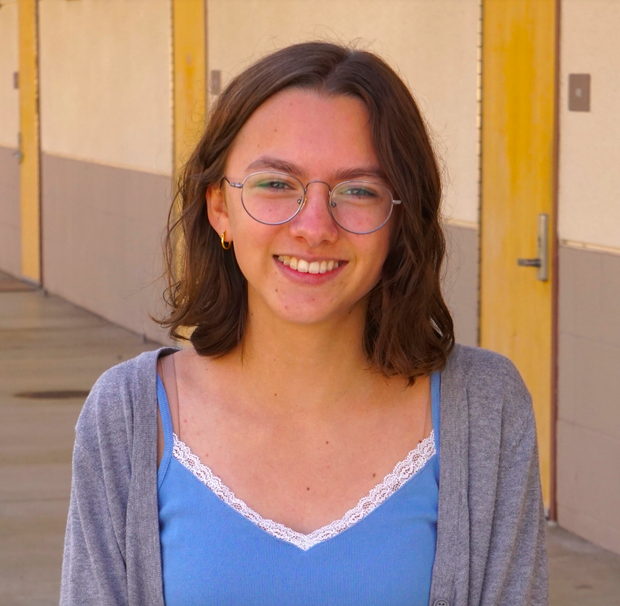 Projecting limitless energy and positivity, junior Katie Hohman has overcome shyness to encourage her peers to step out of their comfort zones and engage in meaningful, constructive discussions about current political and social issues.

A year and a half ago, Katie Hohman found herself in a crowd of 500 peers when she stepped onto Fair Oaks Avenue. On March 24, 2018, she participated in a walkout that memorialized the lives lost in the Marjory Stoneman Douglas High School shooting. Hohman felt a wave of pride for her classmates in their contributions to the nationwide movement, as they held up signs and shouted anti-gun chants.

Although this was only her first protest, she already felt the large amount of power and passion the student body had in their voices. In this moment, she realized the importance of taking action in progressive movements and inciting change within her community.

In elementary school, Hohman was quiet — she spoke when she needed to, but never found the confidence to truly express what was on her mind. But that changed when her friend asked if she was free to attend a political conference.

At age 12, she became a mock delegate to YMCA’s Model United Nations, in which students discuss  diplomacy and global issues. While it was initially daunting to speak in front of a hundred students, over time, she grew to enjoy voicing her opinions and began to feel an empowering sense of inner peace and strength. She joined Youth and Government with a goal to lead her peers out of their bubble and guide them in projecting their voices.

“Being involved in politics from a young age has made me more eloquent, hard-working, and open-minded,” Hohman said. “Being surrounded by well spoken teenagers inspires me to be more involved in my community. Cases like education reform can be solved by young people and we have the power to be a generation of change.”

Hohman has always considered political awareness an important skill. In her free time, she browses through opinion articles on current issues. Curious on how articles are written, she applied for The New York Times’ summer academy where she covered libel trials and gathered public information in interviews. Although intimidated by the large city and bustling crowd, she managed to bravely pull out her notebook and complete her search for interviewees.

Hohman’s willingness and capability to walk out of her comfort zone aided her in prompting discussions during the interviews. Through this experience, she realized that when discussions, conflicts, and solutions are created, a community becomes more integrated and true democracy can be achieved.

“Agreement and democracy can be reached when one is willing to say the things that others won’t and push them to do the same,” Hohman said. “Communication is all about being open and embracing opinions, along with change. Although it may seem scary, when you say what you want, you illicit discussion and become a force of democracy, even within your daily life. ”

Hohman’s journey of writing and collaborating with other vocal and passionate people in The New York Times summer academy, Youth & Government, and the South Pas community led her to overcome her past fears of criticism and continue the path of self improvement and awareness. Determined to help others take the same journey, she has become an outspoken, energetic, and passionate leader who strives to make others feel comfortable enough to speak and act out against the world’s injustices.