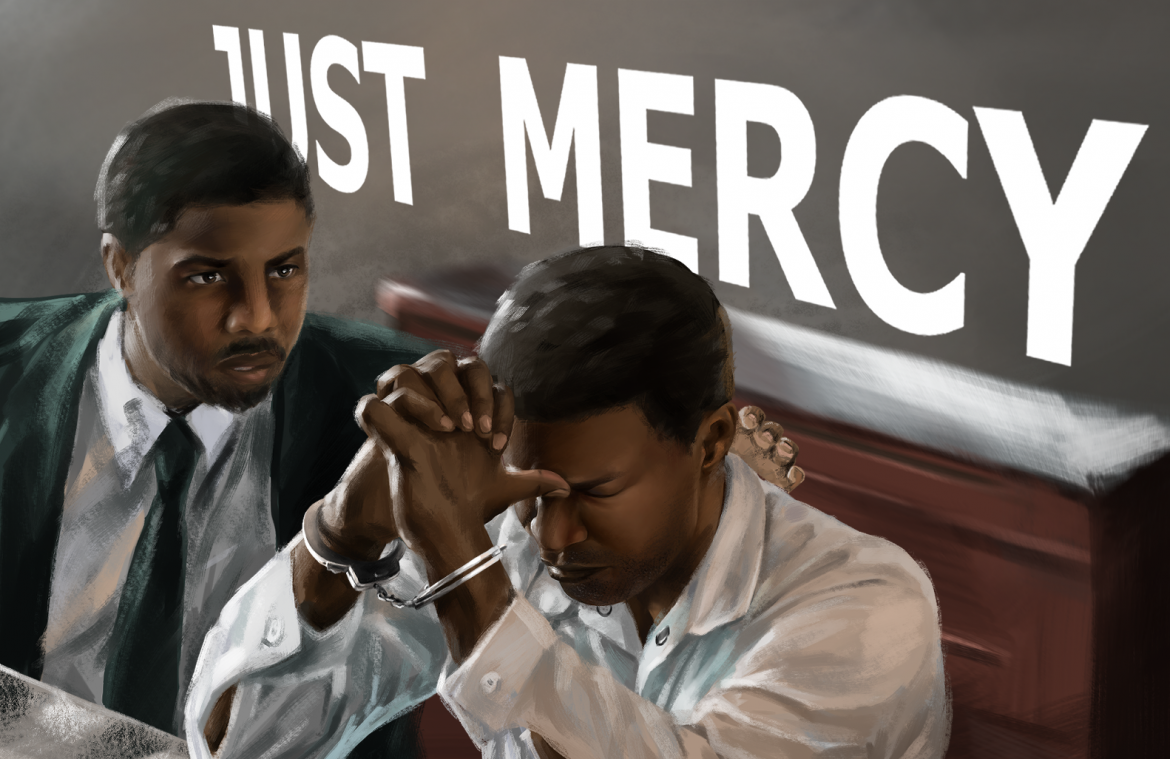 Just Mercy’s significance goes beyond its merits as a well-made film. The story that it tells forces the viewer to confront a truth that many are too sheltered or unwilling to acknowledge, even as it is brought to brighter light every single day: racism is deeply imbued in and tolerated by nearly every facet of the American government.

The film is an adaptation of lawyer Bryan Stevenson’s (Michael B. Jordan) memoir; a recollection of his experience working in the criminal justice field in the 1980s when he moved to the town of Monroeville, Alabama in hopes of getting innocent Black men off death row.

Six years prior to Stevenson’s arrival in Monroeville, Walter McMillian (Jamie Foxx) was wrongfully convicted of the murder of a white teen. The prosecution’s only evidence was a false testimony and he had been on death row ever since. Stevenson is determined to prove McMillian’s innocence, and ultimately exposes the systemic racism that stands between innocent Black convicts and their hopes for re-trial.

Just Mercy’s depth is structured not unlike a matryoshka doll of increasing sizes of internal and external conflict. Stevenson must reckon with the realities of being Black in the deep South, whilst McMillian, exhausted from trying to fight a corrupt government his entire life, must conjure hope to once again defend his innocence. Both are fighting against an unjust criminal justice system and, by extension, fighting an entire government that continues to oppress people of color.

The entire criminal justice system has not only been failing Black Americans but is, at its core, designed to hurt them. Just Mercy articulates this explicitly by laying Walter McMillian’s case out one heartbreaking injustice at a time. One of the most important things to acknowledge while watching Just Mercy is that Walter is more than one man and what happened to him is more than one story. He is one of hundreds of thousands of Black men pushed through an aggressively racist system that wants to either send them to or keep them in prison. He was, in the eyes of the people of his town, the police, and the courts, guilty until proven innocent.

Another one of these men the film examines is Herbert Richardson, a veteran with severe Post Traumatic Stress Disorder. He was drafted at 18, then denied mental health resources after being honorably discharged. In essence, he was used and then discarded by the country he fought for.

His debilitating PTSD resulted in him carrying out an act of misguided heroism that resulted in the accidental death of a young girl. Herbert’s severe untreated mental illness held no weight in court where he was tried in front of an all-white jury. Herbert’s time serving in the military wasn’t even brought up during his trial. He was charged with capital murder and eventually electrocuted. Herbert was set up by the country he served to die: first by being deprived of proper mental healthcare and then by being stripped of the right to a fair trial.

Presumption of guilt is not something that happens only to Black convicts. In just the last few months, it has happened numerous times to Black people while they are running, shopping, and sleeping in their homes. Ahmaud Arbery was murdered by two white men while out for a run in his own neighborhood. Breonna Taylor was shot and killed by a police officer during the execution of a no-knock warrant. Elijah McClain died after going into cardiac arrest triggered by police use of a carotid hold. George Floyd was choked to death by a police officer in the street—a murder that has been described as a “modern-day lynching.”

Neither Taylor, Floyd, McClain nor Arbery were armed. Neither Taylor, McClain, not Arbery were committing a crime. Floyd’s only crime was buying a pack of cigarettes with a counterfeit bill. They were immediately presumed guilty and murdered not only by civilians but by public servants, ultimately betrayed by a system that should be protecting them.

The United States is deeply entangled in a sticky web of both systemic and explicit racism. American government systems continue to function as an echo chamber that legitimizes the bigoted motivations of Floyd, McClain, Taylor, and Arbery’s killers. This country was not built to protect and serve Black men and women. It was built to harm and oppress. Just Mercy demands a better understanding of the grave injustices Black Americans are forced to endure by demanding that the audience grit their teeth and confront the nauseating reality. The movie tells a painful truth and, until racist systems are untangled and dismantled, it is a truth that all Americans must not only chew, swallow, and digest, but work to change.