Janelane and the rise of the DIY band 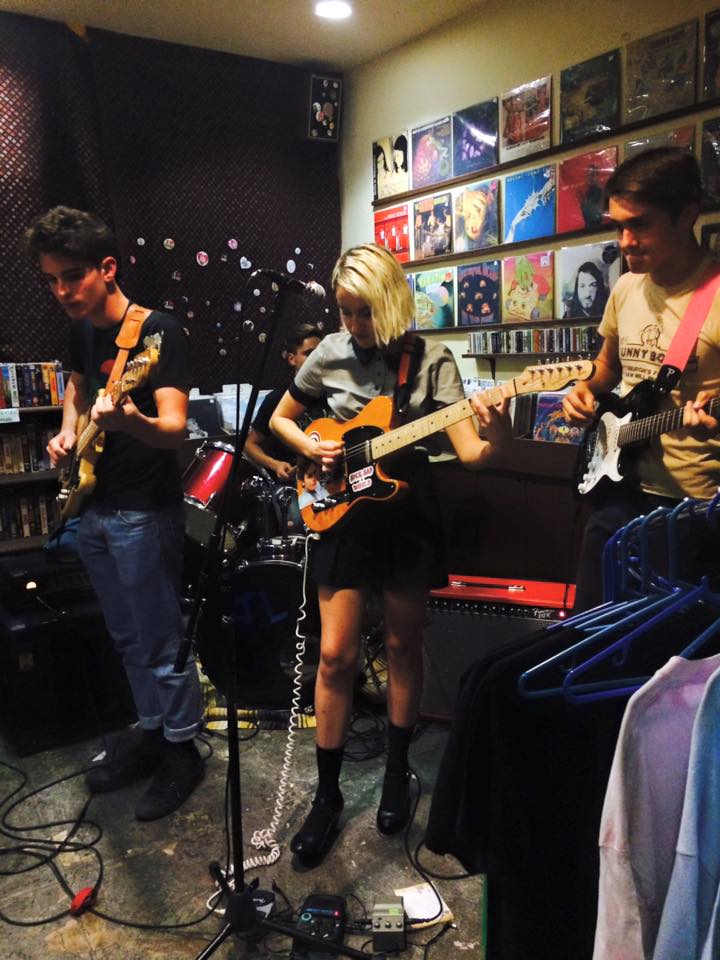 The first time I interviewed Sophie Negrini about Janelane, the power pop band’s lineup had just solidified: Negrini on vocals and guitar, Alex Hardy on bass, Jake Levy as lead guitarist, and Lucas Cereijido on drums. As a result, Janelane’s  SoundCloud featured demos and live recordings, and the group had never performed a live show. 10 months later, Janelane’s body of work has grown to include its Peaches and Cream EP and cassette, 12 live shows, and tentative plans for an album release by the end of the year. Janelane has also become a bragging point for its hometown of South Pasadena, and integrated into a network of DIY music, populated by independent musicians and distributors. And it all started with bedroom recordings and free apps.

Janelane’s homegrown sound perfectly captures the nostalgic, aching tones of adolescence and distant love. The lyrics are powered by a female experience, but remain accessible to any number of genders, age groups, or backgrounds. The band achieves this delicate mix of languor and affection because of its members’ songwriting talents: Negrini is the primary songwriter and lyricist, while Levy and Hardy wrote lines for their newest work (to be released). In a similar vein, Janelane’s SoundCloud demos and sessions were recorded on a USB mic and old Rock Band equipment. And their Peaches and Cream EP was recorded in a private studio above the Pasadena Laemmle Theater, made available to them by one of the band’s acquaintances. If it isn’t already clear, the members of Janelane have grown from the ground up, as a result of their passion for music and loyalty to their experiences.

“People have all seen young musicians in the L.A. underground scene, and have realized that it’s easier to do it by themselves. They don’t need a big record label that’s like, ‘This is what you’re gonna do,’” Negrini said. “The whole allure is that they won’t have to compromise their artistic integrity with stuff that will just make you famous… I think that’s what drives people to work more with their friends to set up house shows or DIY venues. Because they realize they can do it themselves. People and kids will listen and attend and care, you know.”

Janelane performing at the Smell.

This phenomena of motivated, young musicians directing their own work has grown into a potential career field. L.A.-grown band Girlpool started in a similar DIY fashion to Janelane, and has generated a following large enough to be booked at FYF 2015, where they will play alongside the likes of Kanye West and Morrissey; on a smaller scale, bands like Sloppy Jane,Slow Hollows, and Tongues have garnered anywhere from 700 to 1900 likes on Facebook. This burgeoning, super-connected network of DIY musicians is fueled by a remarkable amount of support and acceptance. Unlike the distant celebrities that make up most popular music, these musicians have maintained an intimacy with their supporters and peers, no matter the scale of their success. And though Janelane’s own following has grown in the past year, the members are appreciative as ever of the community around them.

“At first, I was just happy to know that my friends at school and my family were listening to it, but when I found out that some 50 year old lady in Pennsylvania was listening to us, I knew we were making it big,” Hardy said. “Anyone that enjoys our music is a friend of mine.”

The future is uncertain for Janelane, as Levy, Hardy, and Cereijido will graduate from high school next June. In the meantime, they are tentatively hoping for an album release and small tour of the West Coast.

“My main hope is that our album sells well enough so that we can go on a little tour, at least up the West Coast. It’s an idea we’ve toyed with it, but we haven’t started recording yet, so for now, we just gotta take it one step at a time,” Levy said.

When asked separately, all four members said that the best part of Janelane was bonding and having fun times with such closeknit friends.