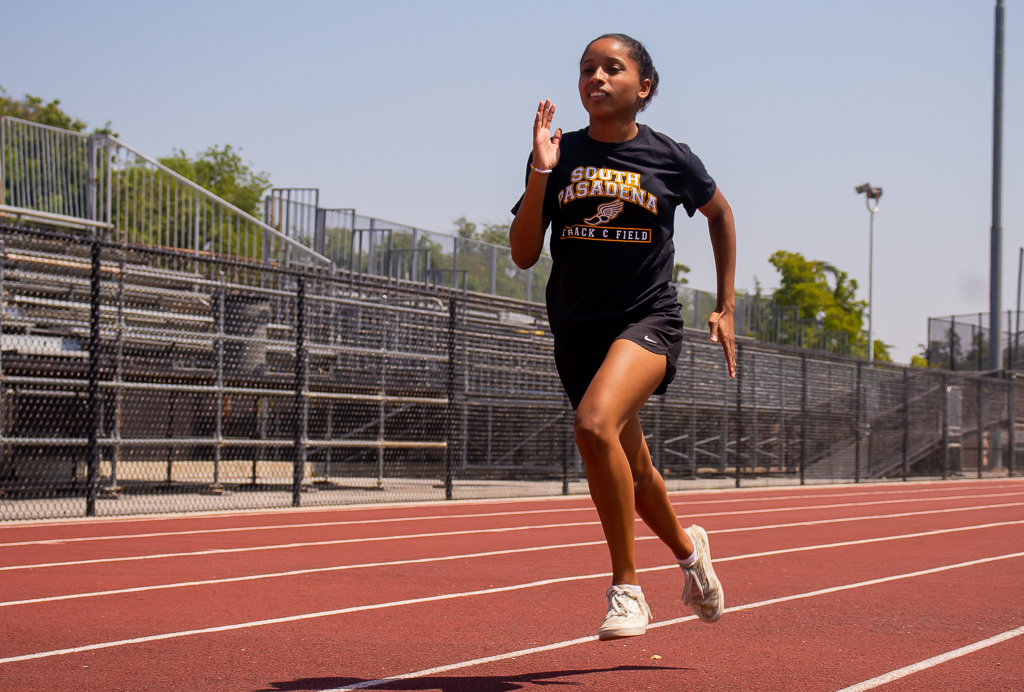 Harris experimented with basketball, soccer, swimming, and even Brazilian jiu jitsu before finding her passion for track and field.

Freshman Jade Harris was more than nervous for this race. As she stepped onto the track, her mind overflowed with self-doubt and worry. The daunting upperclassmen, whose experiences far surpassed hers, seemed calm and more ready than ever. While mounting the starting blocks, Harris knew she only had one chance to run this race, and she better make it her best.

Jade Harris had always been a talented athlete. At track tryouts in December, the coaches immediately saw Harris’s potential, which earned her a sprinter spot on varsity. Yet Harris struggled to feel like she belonged. The coaches’ expectations created immense pressure and the constant fear of embarrassment. Trying to avoid failure, Harris dedicated more time to improve her skills. She stayed with coaches long after practices concluded and worked relentlessly to master blocks and baton handoffs. Despite these efforts, Harris still doubted herself.

“I felt as though all the girls on varsity always had a solid running plan and had the will to prove what they were going to accomplish,” Harris said. “I frequently convinced myself that I didn’t deserve the varsity position because I didn’t have the right mindset or a close enough time as the [experienced] girls.”

Throughout the season, Harris gradually showed improvement. She trained five days a week, slowly increased her practices’ intensity, and her results reflected her commitment. She began the season with 29.42 seconds in the 200 meters and finished with a personal record of 27.50 seconds at RHL finals. Harris’s talent and development led to her earning the privilege of competing in CIF Division III Finals.

In May, Harris walked onto the El Camino College track as one of the six freshmen in the 4×400 relay event. She realized that she was competing on the biggest stage of her young track career. As she lowered into her starting stance, Harris was determined that all her hard work and dedication would shine through in this one race. The starter pistol rang out and she pushed harder than ever before. In the lead, Harris’s fears began to drift away. Other competitors surpassed her, but she drove through the pain and handed the baton off as the third fastest out of eight runners in her leg.

“After handing the baton off to my teammate, I felt this huge sense of relief because it was over and I realized that I had made CIF seem worse than what it actually was,” Harris said. “I spent so much time overthinking my event when I didn’t need to.”

Harris now eagerly anticipates her next season on the SPHS varsity track team and looks forward to returning to the CIF Finals. Wherever she goes in the next three years, Jade Harris is confident she will accomplish many great things.