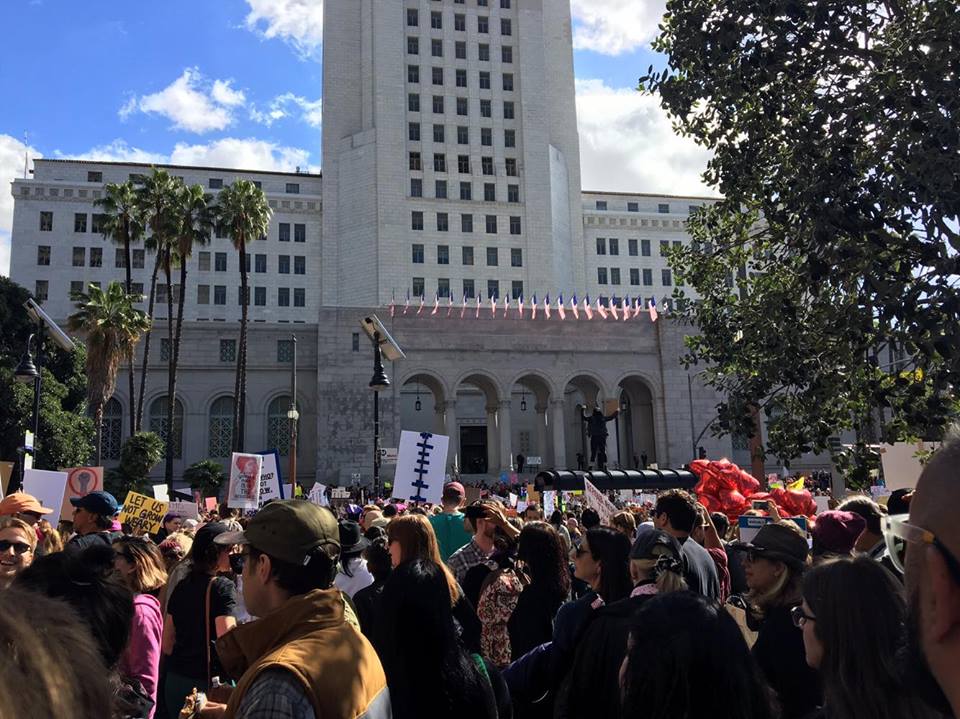 The Women’s March Los Angeles brought an estimated 750,000 people together on the streets of downtown. People from all over Southern California gathered to express a shared discontent and to show communal strength following an especially controversial Inauguration Day.

Energy was high as Angelenos converged, airing grievances about everything from President Trump’s cabinet picks to the future of climate change in the hands of a new administration. Demonstrators stood in solidarity with people and groups that overwhelmingly felt threatened during President Trump’s campaign, including women, people of color, immigrants, refugees, members of the LGBTQ+ community, Muslims, Native Americans, and differently abled people. The march’s tone was indicative of the concerned majority of Americans who oppose President Trump’s views.

The march kicked off at 9 a.m. in Pershing Square where speakers, including Assembly members, Congresspeople, Los Angeles City Council Members, and representatives from many local organizations, shared words of encouragement with demonstrators. A heartfelt poem by 18-year-old poet Jessica Romoff ignited passion in the crowd with its message about the power of self-love. Speeches by local politicians also focused on empowering the audience to create change, emphasizing the importance of political activism in the coming years. By 11 a.m. City Hall was swarmed with marchers awaiting another round of speeches by elected officials and organization representatives. Celebrities and famous activists such as Miley Cyrus and Laverne Cox also spoke.

Los Angeles turned out more marchers than the city has seen since the immigrant-rights march in 2006, and contributed significantly to the swell of nearly 2.9 million who flooded streets nationwide, a day after President Trump’s inauguration.

Women’s marches have a prominent place in American history and the history of feminist activism. Throughout the past century, woman have united countless times in demonstrations to demand voting rights, reproductive rights, and equal rights under the law. Yesterday, women united not only to advocate for their own rights, but for the safety of all people under American law. The designation of a Women’s March called on the power of intersectional feminists across lines of gender to support all marginalized groups.

“This march was not just about women. It is about human rights for all. We have to be concerned with the happiness of all people,” Samson told Tiger.

However, many do not feel that the march achieved its goal of inclusivity. Marchers have been criticized for being largely hetero/cisnormative — assuming all people to be straight and cisgender. Much of the language used on signs and in cheers emphasized an anatomical definition of woman, failing to give any acknowledgement to transgender women. Additionally, publications such as The New Yorker reported that some people of color felt excluded from women’s marches across the country as many of the organizers were white women.

Criticism did not stop the march from encouraging people to become politically active for the first time. Families, children, adults, young people, and students from the Greater Los Angeles Area packed tightly into buses and trains to join the march. Despite an impending finals week, SPHS students traveled by Metro to represent the next generation of political activists.

“The march meant so much to me because seeing all these women working together gave me such a sense of community and pride,” junior Ava Planer said. “[Seeing] that we can come together and be peaceful and actually work toward a cause was amazing.”

Planer’s experience was not unique. Many others found the rally to be a peaceful reflection, in great contrast to the cathartic, sometimes violent protests that occurred immediately post-election. The hostility that provoked several arrests in November was seemingly absent at Saturday’s march, as no arrests were made in relation to the event. One possible explanation is that the gathering was strategically designated as a march of solidarity rather than a protest by organizers on Facebook. What was present in both however, was a strong underlying moral obligation to oppose a Trump administration.

“I got involved in activism at this level because I can not teach my sons to stand up to a bully… if I don’t do the same thing as an adult. [President Trump] does not represent me. He does not represent this country. The popular vote proves this,” Samson said.

The march’s Facebook page, which was its primary means of organization, clarified: “This march is the first step towards unifying our communities, grounded in new relationships, to create change from the grassroots level up. We work peacefully while recognizing there is no true peace without justice and equity for all.”

By evening, students had used their handmade signs to decorate the Walking Man sculpture at the South Pasadena Metro station, bringing the march’s energy back with them. The sculpture now stands as a symbol of an ongoing march into the next four years.