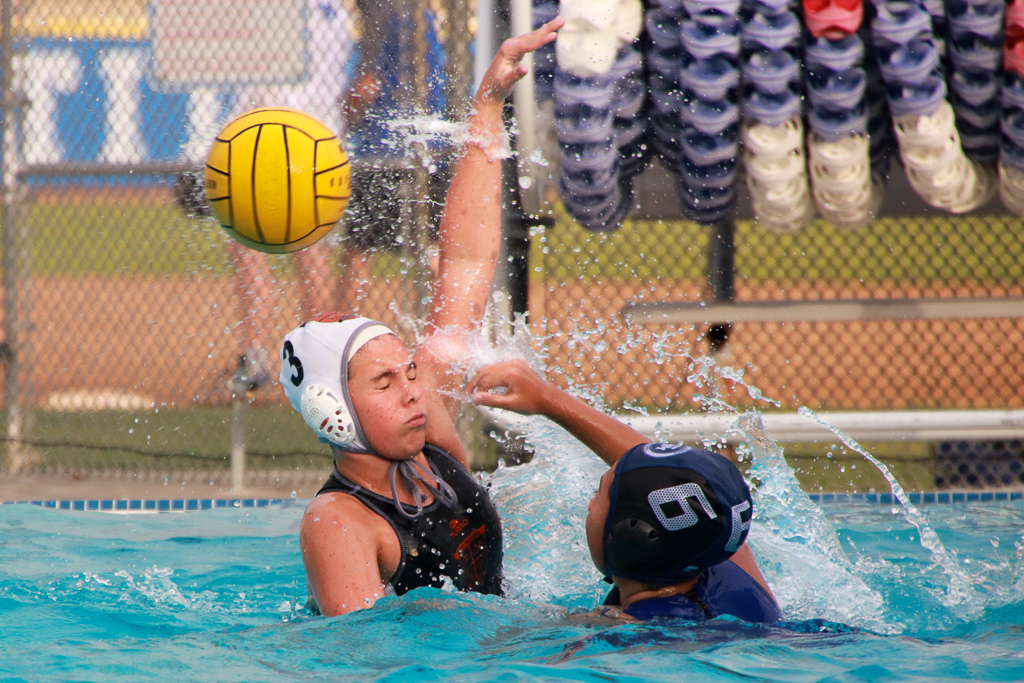 A South Pas defender attempts to block a Titan shot in the Tigers' 12-8 win.

After an impressive win against Monrovia last Saturday, the Tigers were determined to continue their winning streak against the rival San Marino Titans. Girls’ water polo reigned victorious, beating San Marino with a score of 12-8 on Tuesday, January 29.

From the get-go, the Tigers showed their offensive dominance through many speedy steals and close-range shots. Sophomore Amanda Kanaly stole the ball from a Titan and passed it to junior Kili Dickinson, who proceeded to loft the ball to senior Jael Osborne. Osborne immediately rose up and shot the ball at close range into the right pocket of the cage, scoring the first of many goals for South Pas. After another steal, the ball was put into Osborne’s hand again, allowing her to make a second shot within two meters, this time on the left side. Unfortunately, despite a 2-0 lead, the Tigers slipped defensively, allowing San Marino to tie the score at 2-2 by the end of the first quarter.

South Pas’ confidence grew in the second quarter, as they held the Titans to two goals and managed to score four more times. Freshman Sophia Davison and senior Olivia Hunt were strong defensive forces for the Tigers, as they blocked multiple passes and shots, which gave the team more opportunities to score. Hunt also was instrumental in the offensive effort through accurate passes to teammates, allowing senior Sydney Shettleroe to break the tie and push South Pas into the lead again. Kanaly and Shettleroe both scored twice in the second quarter, securing the Tiger’s dominance with a score of 6-2 going into halftime.

The second half of the game was even more fast-paced. Despite losing both sprints, South Pas was able to double their score. While their offensive skill shone, the Tigers faltered in protecting the cage. Although they attempted to hone in on their defense, the Tigers were unable to stop the Titans from scoring many times. In the last quarter, a Titan thrusted the ball from halfway down the pool in Hail Mary fashion, scoring in the bottom right of the cage. Despite that unfortunate final goal, however, the Tigers still rejoiced with their 12-8 victory.

South Pas is hopeful for another win tomorrow, January 30, against Temple City in their final league match before CIF.

Junior Maddie Yoo looks forward to be a Design Editor for Tiger this year. She loves art, crushing her sister at card games, and playing with her black lab, Penny.