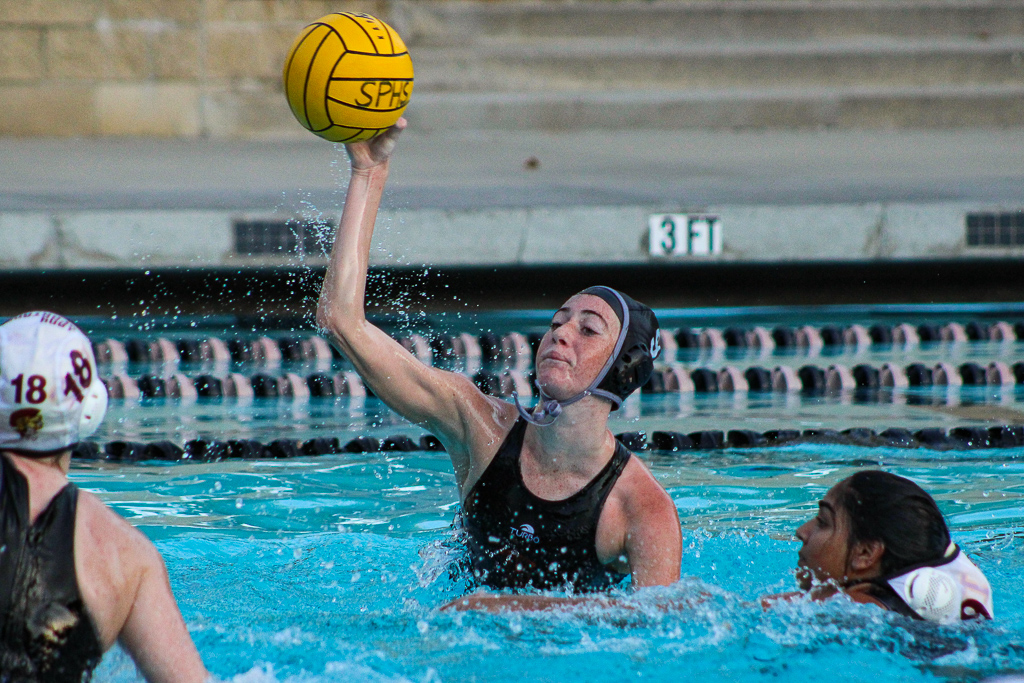 South Pas’ slow start in the first half put them in a 7-1 hole that the team couldn’t climb out of.

Girls water polo suffered a 13-9 defeat against La Cañada on Thursday, Jan. 9. The Spartans showed no hesitation in every move they took, from rapid approaches to the cage and aggressive goals. Despite the Tigers presenting strong teamwork to keep the ball in their possession, their efforts were constantly shadowed by La Cañada’s overwhelming prowess.

As the game began, the Spartans displayed tremendous confidence and speed. Once in position and the ball in hand, they scored immediate, powerful shots into the cage, swiftly accumulating three goals. However, South Pas recovered and freshman Grace Markus and senior Krystal Lee prompted turnover after turnover with their strong blocks.

South Pas finally got on the scoreboard toward the end of the quarter. The Tigers’ crisp ball movement found junior Emma Kucera wide open for their first score of the game. As the game clock buzzed, the Spartans had a slight 3-1 lead.

With Gray in goal for the second quarter, neither team was unable to score for the first five minutes. Then, at the last minute, the Spartan offense exploded and scored three consecutive goals into the unreachable corners of the cage, heading into the break with a 6-1 advantage.

Only 12 seconds had passed in the second half and La Cañada had already increased their lead to 7-1. However, consistent passing and communication played a strong role in the players’ success and enabled Markus, Kucera, junior Amanda Kanaly, and freshman Allison Lee to add five points to the scoreboard.

Despite the Tigers’ efforts, the Spartans remained unfazed and retaliated in the same manner; by the end of the third quarter, the scoreboard displayed an 11-6 advantage for La Cañada.

The Tigers were determined to make a fourth quarter comeback; Kanaly swam past the Spartans’ defense and powerfully flung the ball, which hit the crossbar and fell into cage. Junior Piper Fleming also showcased her skills with a dynamic backhand shot, despite being trapped between two Spartans.

Three minutes remained on the clock and the coaches withdrew several varsity players with J.V. members. Despite the personnel change, the team still displayed offensive success, with sophomore Monet Cajayon and junior Katelyn Hernandez showcasing their formidable shots. However, the Spartans were still in the lead by four points and time quickly ran out, ending the game 13-9.

“Today was a hard fought game and definitely more fast paced than usual,” Kanaly said. “We weren’t overwhelmed, because we had each other’s backs and showed great teamwork. We are determined to bring this same energy and positive attitude into our next game against Monrovia.”

The Tigers’ third league game will take place at home on Tuesday, Jan. 16, against the Monrovia Wildcats.