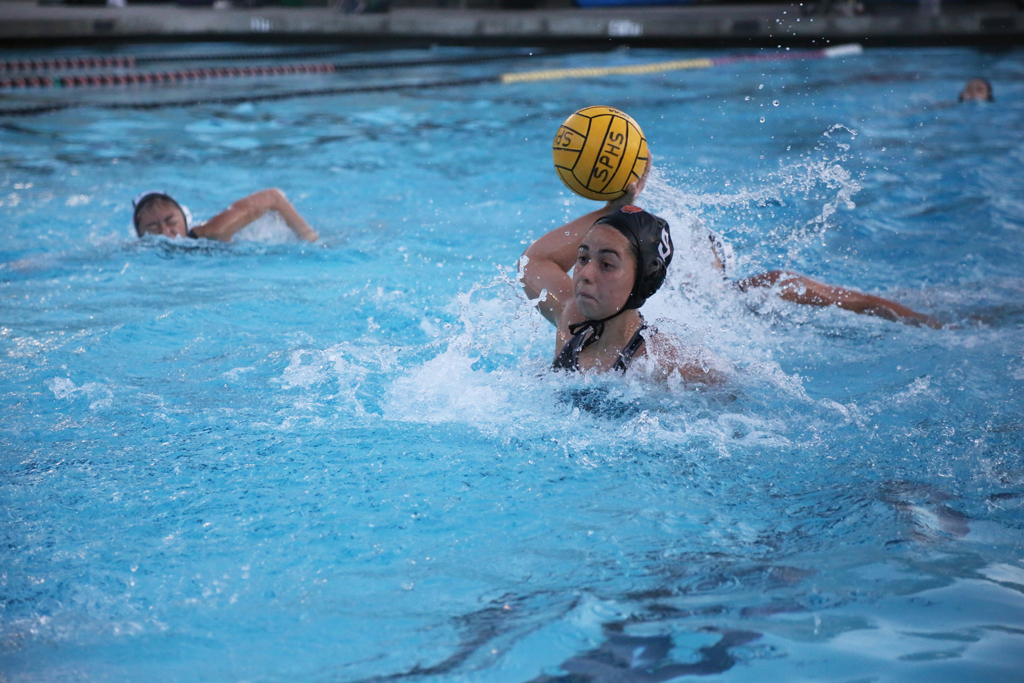 The South Pasadena varsity girls’ water polo team bounced back from Tuesday’s loss, and demolished Eagle Rock High School at home with a score of 10-3 on Thursday, December 17. The Tigers begin league in January and hold a solid record of 4-1 in preseason.

The Eagles, from the very start seemed to be in control with a quick goal from a penalty and shocking number of saves from the Eagle’s goal keeper. However, neither team had complete possession of the ball, until freshman Sydney Shettleroe tied up the game 1-1 with her own rebound, floating the ball over the goalie, and into the net. After a couple of missed attempts by the Tigers, the first quarter came to an end with the score tied up at one each.

Then South Pas went into action when sophomore Hayden Carlson scored two goals; the first goal came from a powerful shot off the rim of the post and the other from a rebound off the goalie, putting the Tigers up 3-1. The Tiger’s momentum carried into the second half, up 4-1. Freshman Sydney Shettleroe added to the lead with a screamer into the back of the net in the third quarter. Eagle Rock, in the last seconds of the third, snuck one past junior Skyler Ramirez, cutting the lead to 5-2.

The Tigers capitalized on several Eagle turnovers and converted them into five straight goals in the fourth quarter. First, senior Savannah Pierce smoothly maneuvered herself through the center of the defense and scored a powerful shot. Then, Shettleroe increased the lead to 8-2 with two goals off two fast breaks. Sophomores Sumiko Rudinsky and Carlson sealed the win with two forceful shots each, sealing the Tigers’ 10-3 win.

“I think compared to the last game we did a lot better with communicating and overall teamwork,” sophomore Lily Defulgentiis said.
The Tigers will continue their impressive season after winter break on Monday, January 4, on the road against Mark Keppel High School.