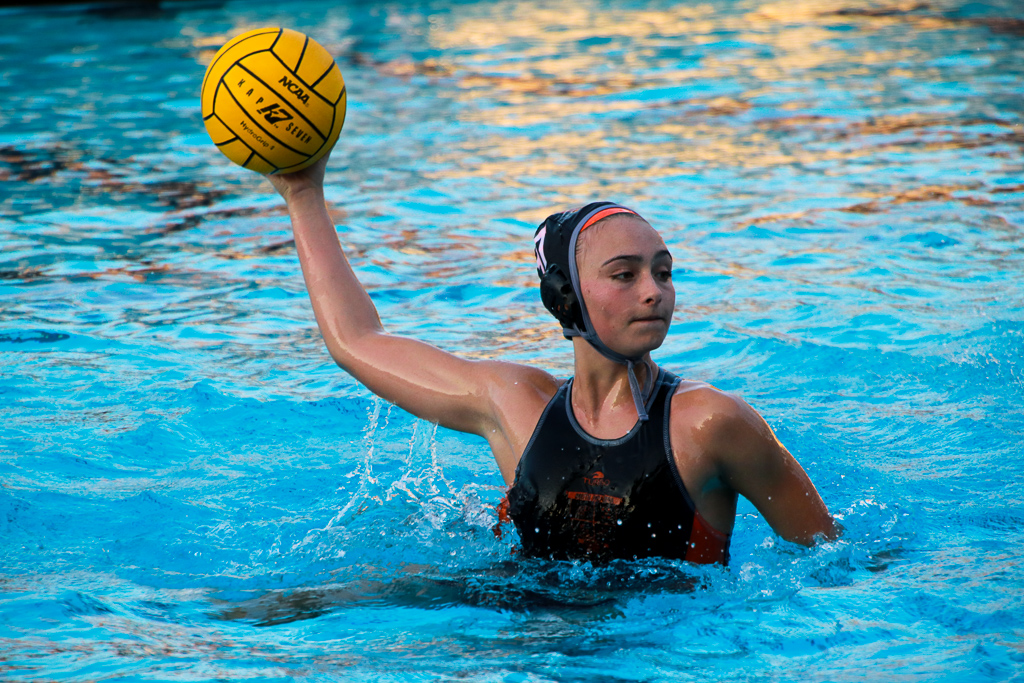 Senior Jael Osborne, who has provided an offensive spark plug all season, led the Tigers to a 12-8 win over Monrovia.

After a disheartening loss to La Cañada on Tuesday, girls’ water polo was determined to dominate Monrovia to get back on track in . The Tigers followed their game plan to perfection, successfully overpowering the Wildcats by a score of 12-8 on Thursday, January 10. With their first league victory, the Tigers’ Rio Hondo record now sits evenly at 1-1, with an overall record of 3-4.

The Tigers demonstrated an improved performance as they strengthened their defense, pressing hard against the opposition. Even with the opening quarter beginning with a Monrovia possession and early goal, South Pas remained unfazed. The girls showed unyielding teamwork, quickly passing the ball to each other. Early in the game, senior Sydney Shettleroe managed to block a Wildcat from scoring. Along with Shettleroe, senior Jael Osborne and freshman Sophia Davison resisted against the Wildcats’ offensive attacks, aiding junior goalie Krystal Lee in blocking an aggressive shot. However, the Wildcats refused to back down and broke past the Tigers’ defense. The last few minutes of the quarter proved to be a nail biter, as the team advanced towards the opposition’s goal, culminating in an Osborne goal. After several turnovers, the first quarter ended with a score of 2-1, with Monrovia in the lead.

After a talk with their coach, the team was determined to make a comeback. Despite losing the advantage of the first possession, the girls swiftly stole the ball and quickly swam across the pool. Passing the ball among each other, senior Olivia Hunt finally found the opportunity to score. Sophomore Amanda Kanaly showed her determination to win as she blocked numerous shots and prompted several turnovers. With an unexpected score from Monrovia, the Tigers were motivated to prevent any further scoring. Senior Alison Lao displayed her strategic skills as she cleverly set up well-placed passes, and Osborne skillfully displayed her expertise as she increased their lead by two points. Hunt and Kanaly continued the offensive onslaught with Monrovia’s goalie unable to block the aggressive shots. Furthermore, Lee stayed alert and blocked a close-up shot, surprising the Wildcats. By half, South Pas had turned the tide of the game; the scoreboard displayed a 6-4 advantage for the Tigers.

With the Wildcats unable to keep up with the Tigers’ consistent passing, the girls found perfect opportunities to score in the second half. Osborne and Kanaly both displayed their remarkable offense abilities with their precise goals, while Hunt and Lee showed their impenetrable defense as they firmly blocked multiple shots.

By the fourth quarter, the Wildcats, drained of energy, realized their comeback was to fall short. However, the Tigers continued to press the opposition. While the girls continued their notable teamwork and offense, junior Kili Dickinson showcased her formidable shots as she added two points to the score. With only a few minutes left on the clock, Monrovia desperately attempted to boost their offensive attacks but found themselves unable to counter South Pas’ strong play. The buzzer rang and the Tigers were declared victorious in their second league game by a score of 12-8.

The Tigers hope to continue the momentum in their upcoming home game against San Marino on Thursday, January 17.