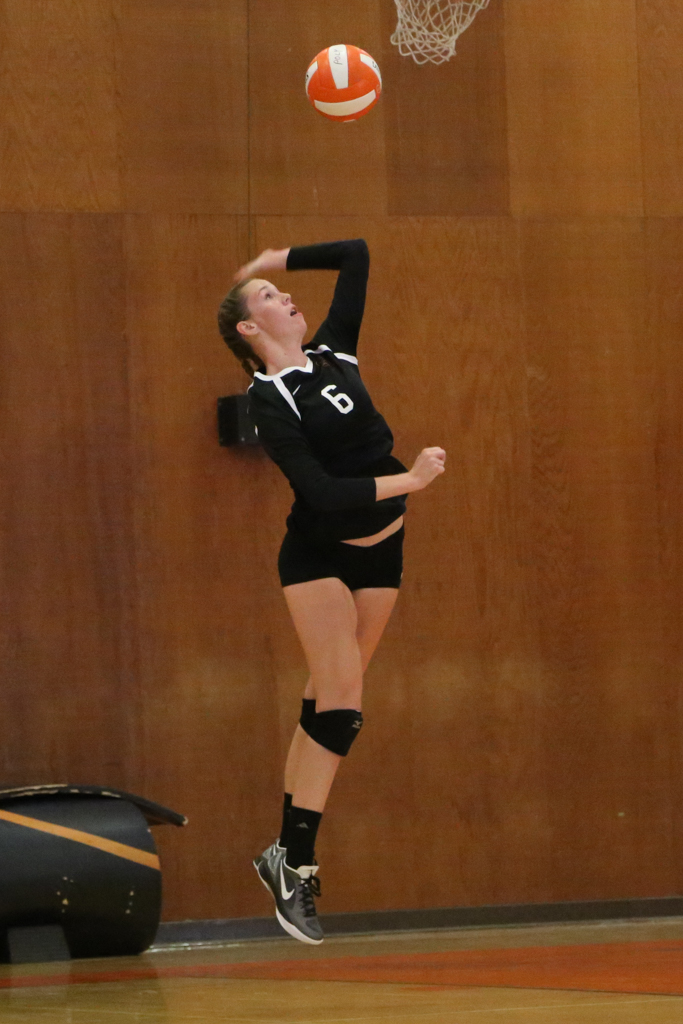 The girls’ volleyball team fell to Polytechnic School in four sets with scores of 13-25, 20-25, 25-19, and 23-25 in an away matchup on Thursday, September 8. This loss brings the Tigers’ record to 1-3. Despite the defeat, South Pas rallied as a team in arguably their best game of the season thus far to give a solid performance.

Poly earned the first four points of the set with three blocks and a tip before sophomore Kimi Brown won the first point for the Tigers with a tip of her own. The Panthers soon gained a fairly large lead which left South Pas trailing for the remainder of the set. While senior Molly Feldmeth sent many powerful hits into Poly’s court, the Panthers’ defense was able to keep them in play. However, Feldmeth was able to sneak a few balls past the Poly defense, and junior Maddie Saito and seniors Amelia De Young and Megan Wong were able to as well. The Panthers ultimately overwhelmed the Tigers with hit after hit on offense and also with many saves on their defensive end. De Young was able to give South Pas one final point off of a kill before a Poly kill concluded the set at 13-25.

The Tigers struck first in the second set, bringing in their first point off of a Feldmeth ace. Senior Ariana Woodworth then went on a five serve streak to bring the score to 7-1. The Tigers had regained their confidence, and as a result remained fairly even with the Panthers throughout the set. Defensively, senior Maddy Hirano was able dig several strong hits and make impressive saves around the court. Feldmeth and Saito continued to deliver tough hits into the Panther defense. Once both teams were tied at 18-18, however, Poly pulled away, aided by kills, blocks, and errors from South Pas. The Tigers were able to score two more points before losing the second set 20-25.

South Pas jumped to an early lead during the third set, fueled by two successive aces from Saito and Panther errors. However, Poly was soon able to tie the game, which remained close in score in similar fashion to the previous set. Several rallies were scattered throughout, with both teams making impressive saves. Most of the Tigers’ saves came from Hirano, though De Young saved a ball from hitting the floor with her foot, but it just missed a full recovery. South Pas broke away from the 17-17 tie as Poly hit balls out of bounds and Brown delivered a solid ace. Two consecutive kills from Feldmeth and junior Harper Fox finished the set at 25-19.

The Tigers came out strong in the fourth set, determined to advance to the fifth. Again, South Pas garnered a small lead and again Poly caught up to tie. The Tigers began to fall behind, but a block from Brown and Feldmeth put South Pas within a close range. Saito attempted to further close this gap with a kill, and soon the Tigers had the lead after a kill from De Young. However, the momentum shifted when the Panthers came back from a five point deficit. Although Poly’s last two points were debatable (one that a block was out of bounds, the other that Brown’s hit skimmed off a Panther before going out), the calls were in the Panthers’ favor, and Brown’s hit ended the set at 25-23.

“I felt that we had a lot more energy and really played as a team today, whereas in our other games we were playing as individuals,” Feldmeth said. “Everyone was hustling after balls and coming together, but we need to be able to close out tight games.”

The Tigers next compete against La Salle at home on Tuesday, September 13, where South Pas looks to improve its overall record to 2-3.