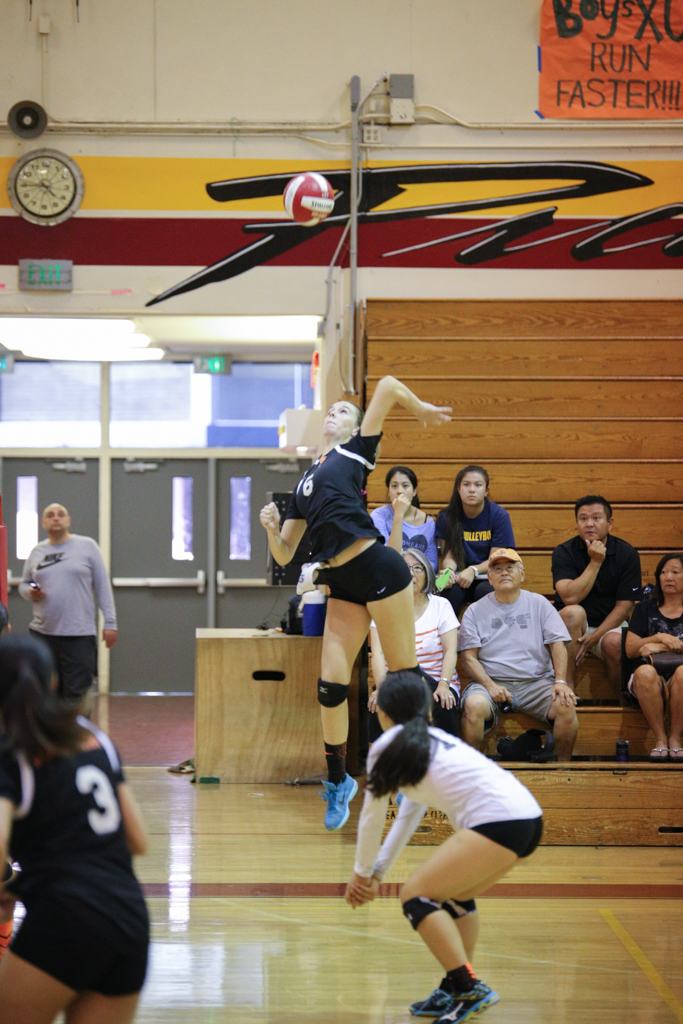 The girls’ volleyball team brought down La Cañada on the road in four sets with scores of 25-17, 25-11, 23-25, and 25-18 on Tuesday, October 13. They remain undefeated in league with a 4-0 record, and an overall record of 11-2, putting South Pas in the number one spot in Rio Hondo. While the Tigers had control of the first two sets, the Spartans were able to respond with a set win before South Pas could take the game victory.

The first set opened with a kill from junior Molly Feldmeth, and the beginning of the set remained close until the Tigers managed to increase their lead. South Pas stayed strong offensively, showcasing many powerful hits kills from Feldmeth, junior Kate Kutzer, senior Taleen Mitchell, and sophomore Maddie Saito. The Spartans attempted to catch up to the Tigers as La Cañada was able to slip a few kills and aces past the South Pas defense. However, the Tigers maintained their lead to the end of the set, winning by a score of 25-17 after a Spartan hit went out-of-bounds.

A Kutzer kill started the second set, and the Tigers quickly took control. They allowed La Cañada to gain a limited amount of points. Junior Maddy Hirano and senior Katie Sokolow strengthened South Pas’ defense with multiple saves that protected the Tigers from giving up many additional points. Sophomore Isabel Blüml also put points on the scoreboard with a block, tip, and kill. Feldmeth, Kutzer, Mitchell, and Saito continued to impress with multiple kills and hits. The set ended off a Spartan block that ricocheted out-of-bounds, giving the Tigers a 25-11 victory.

Mitchell gave the Tigers their first four points in the third set, starting off with a kill followed by two consecutive aces and another kill. South Pas jumped to an early lead, but as the set neared its end, La Cañada gave a final push that ultimately landed them the win for that set. Despite the Tigers efforts to stay in front, the Spartans managed to tie, then beat South Pas by a margin of two points for a 23-25 win, the final point scored off a Tiger error. La Cañada was able to capitalize on South Pas’ errors, such as the Tigers leaving holes in their defense, which contributed to the Spartans’ eventual defeat of the Tigers in the third set.

The Tigers, determined not to give up another set, rebounded in the following set, gaining a narrow lead from the start. The Spartans hit many balls and serves out-of-bounds as well into the net, which helped South Pas gain many points throughout all four sets. The Tigers continued to demonstrate strong offense, such as a strategic set from Feldmeth that threw the Spartan defense off-guard. Feldmeth’s set was followed by a kill from Mitchell, an ace from Sokolow, and finally another kill from Mitchell to end the set at 25-18.

“We fought very hard, but we still made many mistakes which led to us playing four sets instead of three,” Mitchell said. “We need to work on reading where the other team is going to place the ball, and once we do that, we’ll be able to perform much better. Our improvement in that aspect will also help us in CIF.”
The Tigers next face off against Blair High School on Thursday, October 15 at home. South Pas looks to improve its league record to 5-0 and its overall record to 12-2.