Top Posts
Teachers voice concern over adopted learning models
Community may get a chance to vote on...
SPUSD outlines plans for distance learning during the...
Anti-Zionism cannot be equated with anti-Semitism
Anything goes?
L.A. complies with statewide protections and improvements for...
LARPing: an activity to experience the game beyond...
Residents voice encounters with the SPPD at virtual...
Why affirmative action is necessary
CIF announces athletic calendar for 2020-2021 school year
Home Featured Girls’ volleyball sweeps Polytechnic in clean three sets
FeaturedSportsWeb Exclusive 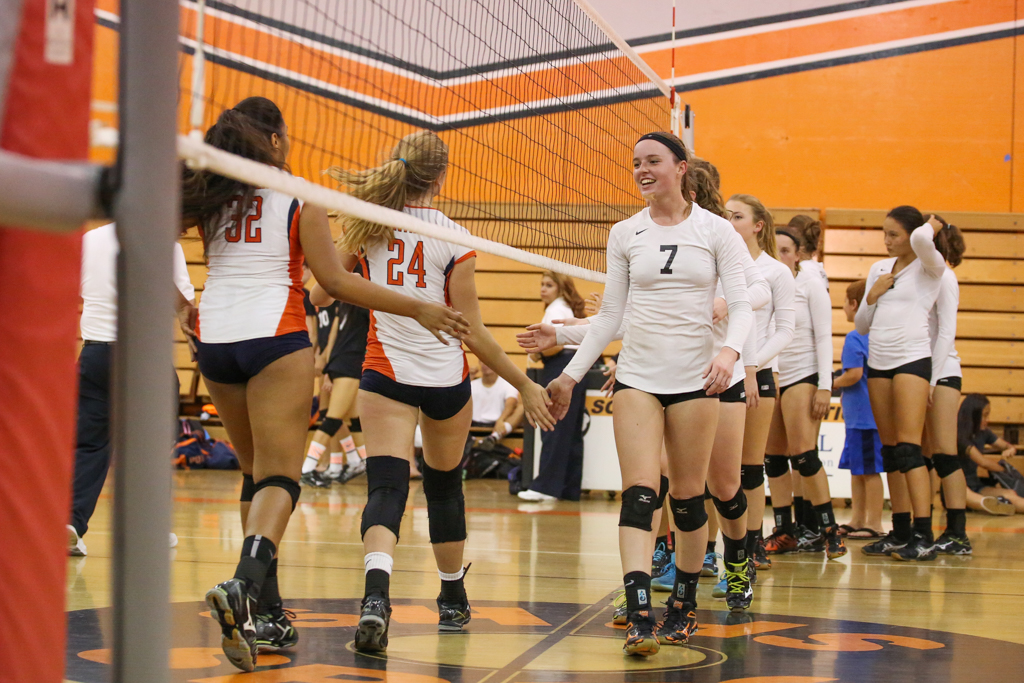 The girls’ varsity volleyball team defeated Polytechnic School in three hard-fought sets with scores of 25-19, 25-16, and 25-23. This was a change from the last time South Pas faced Poly, when Poly knocked the Tigers out of the running for a CIF championship. The Panthers provided a much greater challenge to the Tigers than other teams had in the last few games, but South Pas managed to come out on top.

The first set started out strong from both sides. Seniors Taleen Mitchell and Katie Sokolow and junior Kate Kutzer had many excellent hits, some of which were blocked by the Panthers. The Tigers had satisfactory defense at the beginning of the set, as well as consistent blocks and hits. In turn, the Panthers had great serve-receive and were able to block multiple hits from the Tigers. Poly pulled ahead at first, but after a timeout at the score of 10-14, the Tigers regained their confidence and pulled ahead. The Panthers would not lead for the rest of the game, and the Tigers did not look back once. Kutzer and Mitchell continued to find the holes in the Panther defense in order to erase the deficit and establish a lead. Sophomores Harper Fox and Isabel Blüml were able to see more action than they had in previous games, contributing  to the Tiger squad with several blocks. The set ended with a score of 25-19.

The second set was fairly even in score until the Tigers broke free and kept their lead. Junior Molly Feldmeth added to the strong offense with many kills. Though the Tigers led, the Panthers kept South Pas on its toes with blocks and a few hits, though many of Poly’s hits went out-of-bounds. The Tigers had many consistent serves from several players, including junior Madison Hirano. Feldmeth and Blüml had strong blocks, and Kutzer and Mitchell continued to put the Panther defense to work. Again, the Panthers could not come through and the set ended at 25-16.

The Panthers’ strongest efforts were seen in the third set, but to no avail. Kills from Feldmeth, Kutzer, and Mitchell constantly forced their way through the Panther defense. However, Poly managed to stay close in score until the Tigers pulled away. Hirano and Mitchell each made key saves, and sophomore Madison Saito was able to get a few strong hits of her own. The Panthers still fought back with their blocks and hits, and managed to score more points than they had in the previous sets. The Tigers kept the Panthers at bay, and a kill from Mitchell ended the game at 25-20.

The Tigers felt they performed well, though they want to see some improvements on inconsistent parts of their game, such as serve-receive.

“Serve-receive is always a bit inconsistent,” Hirano said. “However, our blocking and hitting was really good, and Poly wasn’t able to defend against a lot of our attacks. We played as a team pretty well, which was seen in the final score.”

Even though the Tigers fell to the Panthers last season, South Pas views its victory as a fresh start. Both teams gained new players, and players felt that the game couldn’t really be compared to the previous year.

“The game we lost is in the past. We have  a whole new team and so do they,” Hirano said. “It just feels great to win.”

The Tigers want to continue on their winning streak and hope to gain another win against Mayfield Senior School on Thursday, September 8, at Mayfield.