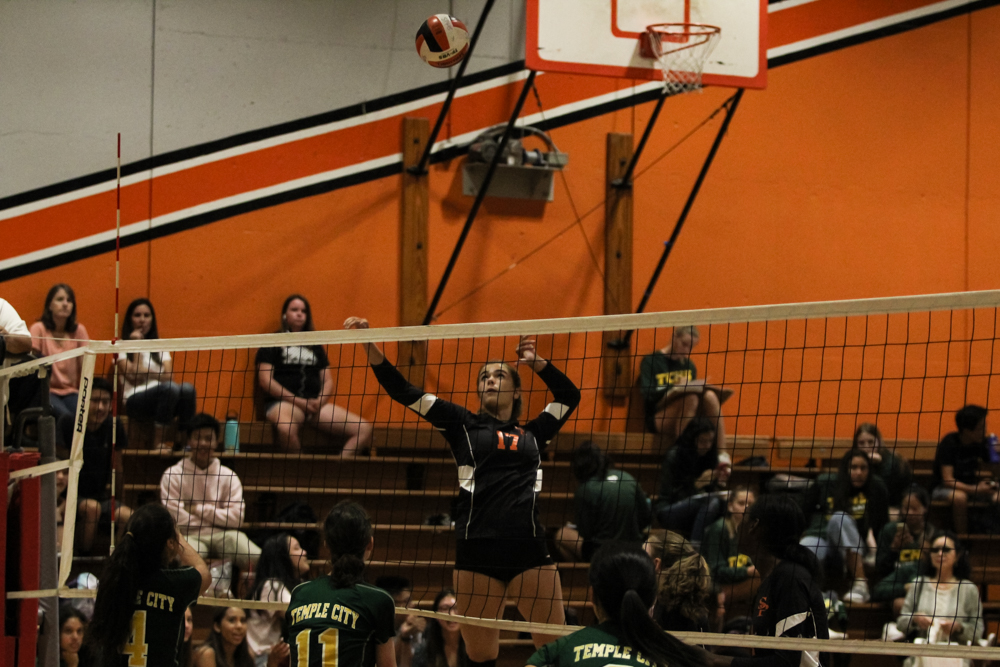 Sophomore Lola Foord rises to spike the ball over the net.

Girls’ volleyball defeated Blair for the second time this season in three sets on Thursday, October 4. Their current league record is 5-2 with two more games left in the season.

SPHS started off the first set establishing a strong lead, with the score 6-0 in favor of the Tigers. From there the Tigers scored easily, with the Blair Vikings struggling to keep up. With South Pas up by fourteen, sophomore Katherine Florence dove to save the ball, which senior Madison Abundo had set to senior Jessica Lopez, securing another point for SPHS. The Tigers closed off the set with a score of 25-5.

In the second set, South Pas quickly surpassed Blair with six quick points. The Vikings started to catch up, cutting the Tigers lead to two. However, SPHS quickly recovered with aces by Maddison Abundo and a block by senior Laya Jabalameli. Several more points were earned for South Pas through Blair miscues. The Tigers eventually won the set 25-15.

The Tigers started off rocky in the third set, with the Vikings earning the first few points, leaving SPHS down three for the beginning of the set. South Pas briefly reigned the upper hand with the score 10-7, but Blair came back with full force, leaving the score tied at ten. However, it wasn’t long before the Tigers were back on track for a victory with a spike from Lopez. Sophomore Ella Holdly-Brill served more aces for SPHS, while Florence scored several more points with hard-hitting serves, finishing off the 25-13 win for South Pas.

Girls’ volleyball will have a chance to beat Temple City for the second time this season on Tuesday, October 9, at 3:30.