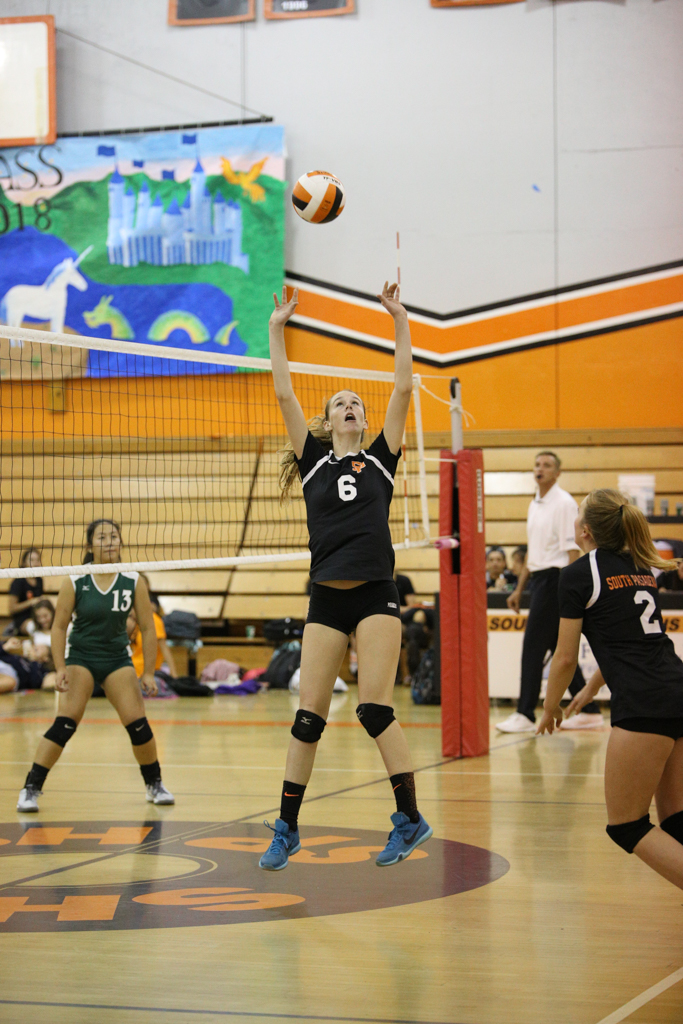 The girls’ volleyball team defeated Temple City in three sets at home by scores of 25-13, 25-16, and 25-21. South Pasadena’s league record now stands at 6-0 and 17-2 overall. The Rams surprised South Pas with a stronger overall performance than in the two teams’ previous matchup, but the opposing team was still could not impose a competitive match for the powerful Tigers.

The first set against the Rams started evenly before the Tigers were able gain the lead and remain in front for the rest of the set. Kills from senior Taleen Mitchell and juniors Molly Feldmeth and Kate Kutzer were littered throughout the set. The Rams provided a stronger serve-receive than the Tigers were expecting, and many of South Pas’ hits went directly to Temple City’s defense. However, the Tigers were able to prevail by a wide margin with a score of 25-13.

“When we play against easier teams, our coach gives us goals to fulfill throughout the game, but sometimes we get so nervous about the goals that we give up more points. Temple City’s scores were higher this time because we were focused on completing the goals individually rather than as a team, amongst other mistakes we made,” junior Maddy Hirano said. “Our goal this game was to get at least five middle kills, but we just couldn’t follow through.”

The second set was similar to the first, featuring strong hits from Feldmeth, Kutzer, and Mitchell. However, the Tigers remained even with the Rams until South Pas broke free from a 16-16 tie. Mitchell led the Tigers with a nine point serving streak with a few aces mixed in. The set ended at a score of 25-16 as Temple City was not able to gain another point for the remainder of the set.

The Rams put the first point on the scoreboard in the third set, but the Tigers were undeterred and quickly gained a lead. A block from sophomore Harper Fox gave South Pas a point, as well as a kill from sophomore Maddie Saito. The Rams hit many balls out, as did the Tigers, though Temple City was able to provide decent-serve receive. Feldmeth and Mitchell each had a few more kills, and Kutzer and sophomore Isabel Blüml gave the Tigers another point with a block. Towards the end of the set, the Rams attempted to make up for their deficit of points, going on a five point streak to land at a score of 23-19. South Pas managed to keep their lead and went on to win the set at 25-21.

“This was not one of our best games,” Hirano said. “We were more focused on our goals rather than gaining points, and it threw off our defense, hitting, serving, and blocking. Our next game against San Marino will be harder than this one, but I think we’ll be prepared and hopefully we’ll come out with another win.”

The Tigers next face off against the rival Titans at San Marino on Thursday, October 22. South Pas looks to stay on its undefeated league streak, hoping to improve the team’s league record to 7-0 and 18-2 overall.

Girls’ golf sends five athletes to second round of CIF