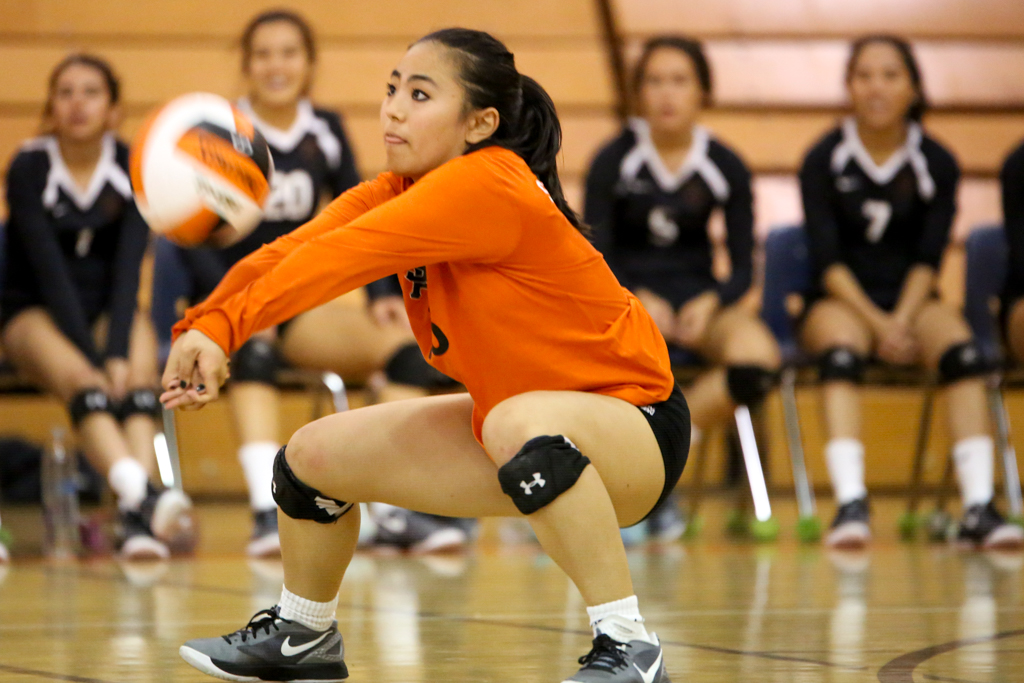 The girls’ volleyball team suffered a loss to rival San Marino in the two team’s second matchup at home on Tuesday, October 18. The Tigers fell in four sets, winning the first 25-19 and losing the next three 20-25, 18-25, and 18-25. This loss puts their league record at 6-2 and 8-6 overall. Previously, the Tigers had beaten the Titans in three sets. South Pas struggled without key player senior Molly Feldmeth, who was out with a concussion, as Feldmeth consistently racked up a majority of the Tigers’ kills and provided solid setting.

Junior Maddie Saito quickly opened the first set with a kill, which was soon followed by a San Marino error to put the score at 2-0. The Titans, however, brought the score close, and it remained that way as the two were tied at 9-9 after a kill from sophomore Ashley Hugasian. Senior Ariana Woodworth produced two aces during a five point serving streak, allowing the Tigers to take a larger lead. Woodworth and senior Maddy Hirano also provided solid defense for South Pas, often making key passes and digs. The Tigers continued to expand their lead off of kills from junior Harper Fox, though the Titans managed to keep several of South Pas’ hits in play. Throughout the set, players such as Hirano, Saito, and junior Lily Turner-Kipke made several saves to aid the Tigers in staying ahead. An ace from sophomore Kimi Brown ended the first set in South Pas’ favor at 25-19.

Saito opened the second set in the same manner as the first, and the Tigers quickly jumped to a lead. South Pas was unable to maintain it, however, and the Titans drew closer and eventually ahead off of aces and kills. Once San Marino began to lead, the Tigers found themselves struggling to catch up. Both teams committed several errors as well, and both were also able to execute solid offensive plays. Errors such as unrecovered passes caused the Tigers trouble, and the Titans eventually took the set 20-25 off of an ace.

The Titans were the first to score in the third set, though South Pas worked to remain close with kills and a block from Saito and senior Amelia De Young. After tying at 13-13, San Marino seized momentum and gave the Tigers few chances to come close. The Tigers had trouble on the defensive end as the Titans slipped a considerable amount of kills and aces past South Pas and that several passes went unrecovered. Despite another block from De Young and kill from Saito, the Tigers could not capitalize on many of their offensive opportunities as many hits went awry. A San Marino kill concluded the third set at 18-25. Though Feldmeth had changed into her uniform during this set despite her concussion, she was not put into the game.

The fourth set proved to be the Tigers’ most challenging. The Titans immediately garnered a hefty lead that continued to grow as the set progressed. South Pas found itself unable to find its footing, and thus the score reached 6-20, with San Marino leading by a wide margin. The Tigers worked to try to close the gap, and were able to stage an impressive comeback. De Young started South Pas’ attempt to climb back by spiking down a Titan freeball. Saito followed with a kill, and San Marino made many mistakes to help fuel the Tigers. South Pas’ defense improved, and eventually the score reached 16-24 after a Brown kill. Hirano continued to aid the Tigers on defense, as well as Woodworth. The Tigers earned two more points before a San Marino kill finished the hard-fought set at 18-25.

“It was definitely hard without Molly as she is a key part of this team, but we could have won these games today without her,” Hirano said. “We lacked communication throughout the last three games and that really hurt our performance. Next game will be really tough, but I believe that if we play our best and believe in our abilities, we have a very high chance of doing well.”

The Tigers face Monrovia at home on Thursday, October 20, South Pas’ Senior Night, where the girls look to earn a win over the Wildcats. A victory for South Pas would put its league record at 7-2 and overall record at 9-6. Monrovia defeated the Tigers in three sets in their first matchup. Feldmeth is not expected to make a recovery by Thursday.