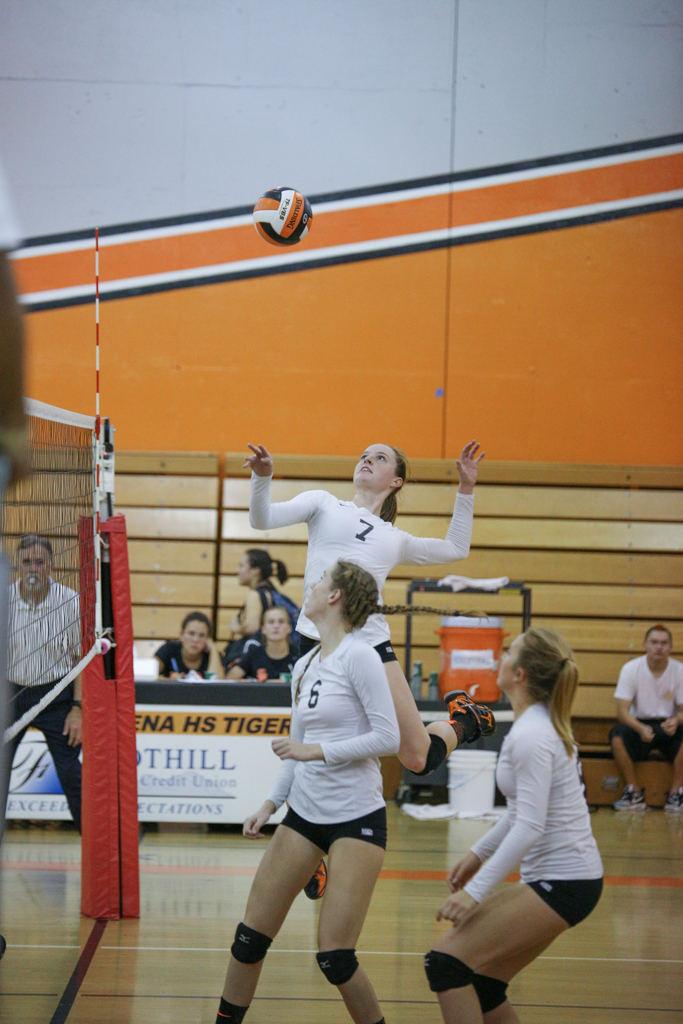 The girls’ volleyball team defeated El Rancho High School at home in three sets sets with scores of 25-9, 25-13, and 25-11. Their record now stands at 5-1. The Dons were no match for the Tigers as South Pas was consistently strong throughout the game.

The Tigers jumped to an early lead in the first set, fueled by kills from senior Taleen Mitchell and sophomore Harper Fox, and an ace, as well as several kills, from junior Kate Kutzer. South Pas had additional aces from multiple servers, and the Dons were not able to defend a considerable amount of Tiger hits. The Tigers rarely allowed El Rancho points with sturdy defense, and aside from one kill, the Dons’ hits generally would not meet the intended target. The set ended at a score of 25-9 when an El Rancho serve went out-of-bounds.

The second set remained even for the first portion, often with El Rancho gaining on South Pas by a point. However, due to strong hits from junior Molly Feldmeth, Kutzer, and Mitchell, the Tigers were able to pull ahead, and the Dons would no longer be able to catch up. Sophomore Isabel Blüml had two consecutive blocks to increase the lead South Pas continued to have powerful serves, including a serving streak from junior Ariana Woodworth, and a hit from sophomore Maddie Saito ended the set with a score of 25-13. It would be the largest number of points El Rancho would be able to gain in the whole match.

South Pas proved victorious in the third set as well, opening with another Mitchell kill. The Tigers continued to be strong all around the court, whether they were hitting, digging, or serving. Woodworth had another serving streak, and Feldmeth and Fox had a tremendous block. Feldmeth, Kutzer, Mitchell, and Saito each contributed several more strong hits. Many of El Rancho’s kill attempts couldn’t make it over the net, and after many consistent serves, an ace from senior Katie Sokolow ended the game at 25-11.

“Today was a really good game for us. We set goals for ourselves and we reached all of them with strong hitting and passing,” Mitchell said. “It was just a great game for everyone, especially Molly and Kate as they had really good swings that got them numerous kills.”

The Tigers face off against Bassett High School at home on Friday, September 8, where they hope to continue to get back on their winning streak.