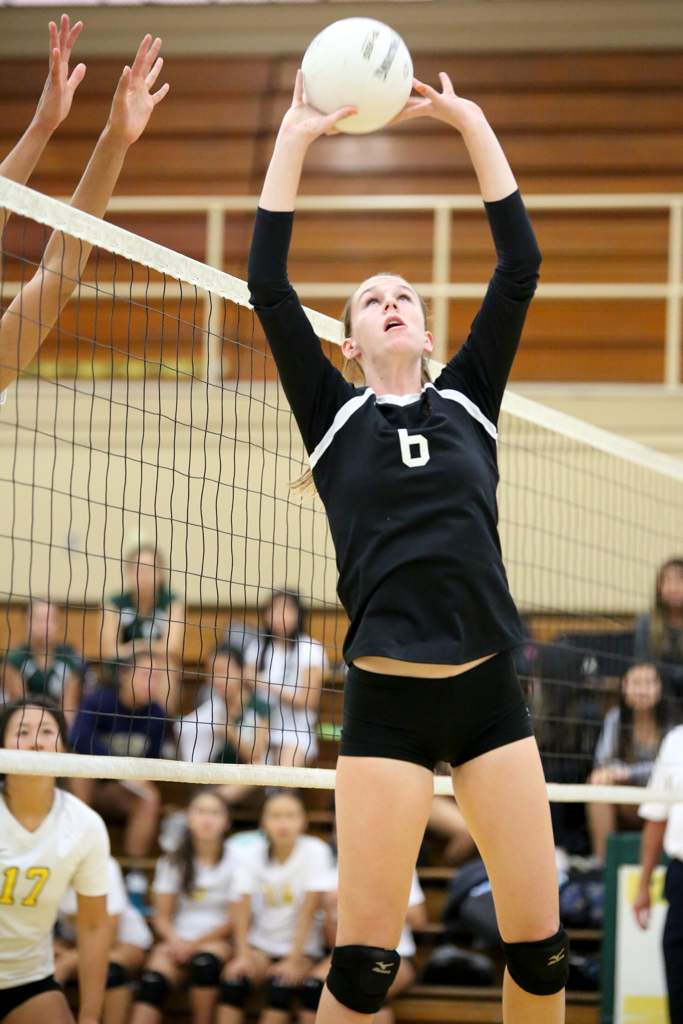 The girls’ volleyball team defeated Temple City in the two team’s second matchup of Rio Hondo. The Tigers won in five sets, similarly to their first matchup against the Rams, with scores of 25-19, 25-16, 15-25, 23-25, and 15-7, and the victory puts South Pas’ league record at 6-1 and 8-5. While the Tigers came out as the dominant team, Temple City was able to garner a majority of its points off of their core player, Serena Gray.

The Tigers came out strong at the beginning of the first set, largely due to junior Harper Fox, who immediately earned four kills. South Pas grabbed a narrow lead, though the Rams were soon able to catch up off of several kills. South Pas struggled to keep a majority of Gray’s spikes in play, despite a strong effort by senior Maddy Hirano. At one point, Hirano was struck in the face by a Ram spike, but the ball rebounded back into Temple City’s court. Senior Molly Feldmeth also gave the Tigers many points with powerful hits and a block. Feldmeth’s block was followed by a Temple City time-out, and soon after the game resumed two successive kills from junior Maddie Saito and Fox ended the first set at 25-19.

A rally opened the second set, and Feldmeth garnered the first point with a kill. However, the Rams soon obtained a four point lead off of South Pas errors and Temple City hits. An awry Ram serve allowed the momentum to shift in the Tigers’ favor, and Fox quickly followed with a kill. Senior Amelia De Young tied the match at 11-11 after a powerful hit. Two Temple City balls went out of bounds to give the Tigers a lead. Once South Pas had jumped in front, the Rams would be unable to catch up. A Saito kill concluded the set at 25-16.

The third and fourth sets, like in the Tigers’ first game against the Rams, did not end in South Pas’ favor. In the third, Temple City again grabbed an early lead, but the Tigers were able to catch up and move ahead. Feldmeth provided a majority of South Pas’ offensive effort with several kills. The Rams dominated with spikes from Gray, as well as strategic tips that South Pas struggled to recover. A Tiger pass that flew out of bounds finished the third set at 15-25.

The fourth set followed in a similar fashion, except that South Pas established a lead until the two teams tied at 16-16. The lead was largely thanks to Feldmeth and Fox, as well as consistent serving from senior Ariana Woodworth, who had provided solid serves throughout the previous sets as well. Temple City managed to jump in front at 19-23. Feldmeth aided the Tigers in tying the game at 23-23, but the Rams followed with a kill and a block to narrowly win the fourth set 23-25.

South Pas was determined to take the fifth set, and came in with renewed energy. The Tigers immediately captured a hefty lead. Sophomore Kimi Brown went on a five-point serving streak with an ace mixed in, and Feldmeth, Fox, and Saito continued to dominate on offense. Hirano was able to defend several of Gray’s spikes, though some slipped past to give the Rams points. The set drew to a close at 15-7 after a Temple City player hit the ball into the net.

“We weren’t playing as scared and we had a lot more energy than the last time we played them,” Feldmeth said. “Though the energy was better, I don’t think we dug their big hitter as well as last time. We play San Marino our next game so I expect we will come out with a lot of intensity and fire since it’s our rival and we want to beat [the Titans].”

The Tigers next face San Marino at home on Tuesday, October 1_. In the rivals’ first matchup, South Pas cruised past the Titans in three sets at San Marino. The Tigers are confident that they will earn another league victory to maintain their place in second, and to put South Pas’ league record at 7-1 and overall record at 9-5.