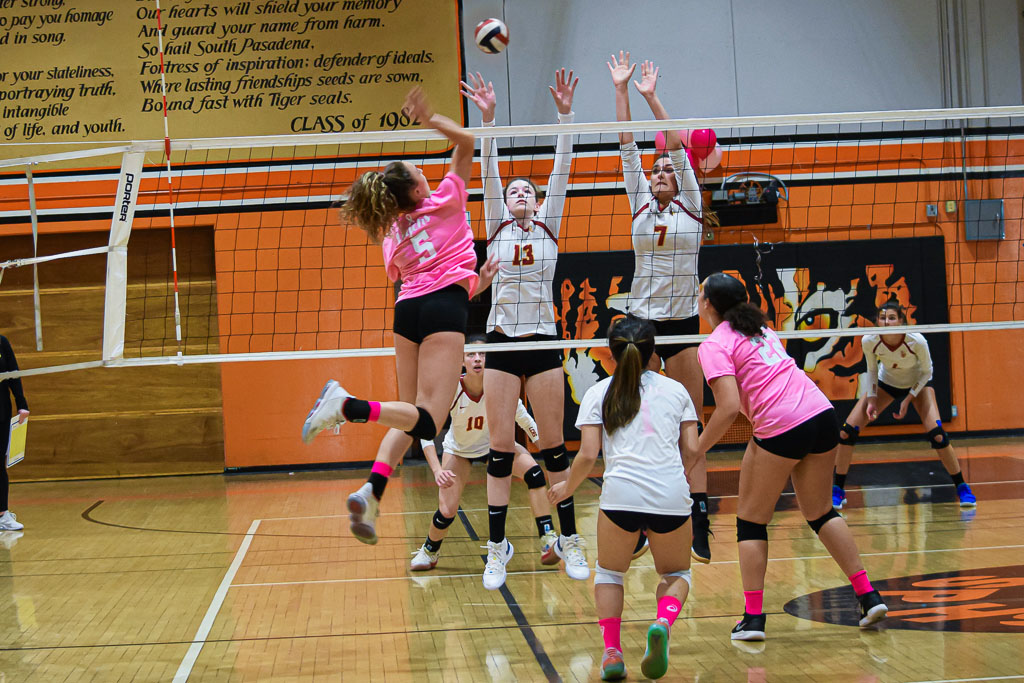 The Tigers now boast a 8-0 league record, while the Spartans trail behind them with a 6-2 record. As they beat La Cañada twice this season, no matter the outcome in the last two games, South Pas will win the RHL title.

The girls varsity volleyball dominated La Cañada in four sets during the ‘Dig Pink’ game on Thursday, Oct. 10. With this win, the Tigers clinched the league title with two games still remaining.

In honor of Breast Cancer Awareness Month, the Tigers wore special edition pink uniforms. Coach Ivy Chew and parent Lolita Lopez gave brief speeches on their experiences with breast cancer and held a moment of silence for all the lives lost due to the disease.

In the first set, junior Lola Foord set the tone for South Pas will countless kills. However, the Spartans stayed close behind, as the Tigers were slow to respond to their spikes.

Sophomore Alyssa Sokolow also helped the team secure the win by spiking multiple crucial kills at the end of the long rallies. Towards the end of the set, La Cañada began to make a comeback, but South Pas quickly shot them down and won, 25-23.

The Spartans shut down the Tiger offense early in the second set, putting up a wall of impenetrable blocks. But, Foord would not be denied and a terrific spike put South Pas up, 14-12, energizing the team and the student section.

Freshman Sofia Reyes helped the team along by setting many impressive balls to sophomore Abby Garner. Eventually, the Spartans were unable to pull through and the Tigers won 25-19.

However, South Pas was unable to keep their winning streak alive in the third set. Both sides began with sloppy play; the first few minutes were filled with mis-hits and erratic spikes.

During the long, stretched out rallies, freshman Ava Dorny offered amazing blocks alongside sophomore Kennedy Taylor, but the Tigers’ slow start doomed them and the Spartans won, 25-23.

After the sloppy third set, the Tigers began the next focused and determined. Foord scored the first two points for South Pas with a violent spike and a soft tip.

Throughout the set, the Tigers would rattle off a string of kills and then allow the Spartans to creep back into the game, never fully establishing a stable lead.

An Abby Garner tip gave South Pas a 15-11 lead, capping off a four-point run, and La Cañada started to crumble. With multiple missed serves and botched spike attempts, the Spartans were simply unable to hit the ball over the net and looked sluggish and defeated.

Junior Lindsey Hirano placed a perfect serve between the La Cañada defense to open up a seven-point lead and South Pas strolled to a 25-18 set win.

“[Winning league] feels really great,” Hirano said. “It’s really awesome because we haven’t been league champs for the last two years, so it’s great to bring it home this year.”

The Tigers will look to continue their undefeated season against Blair, Tuesday, Oct. 15.