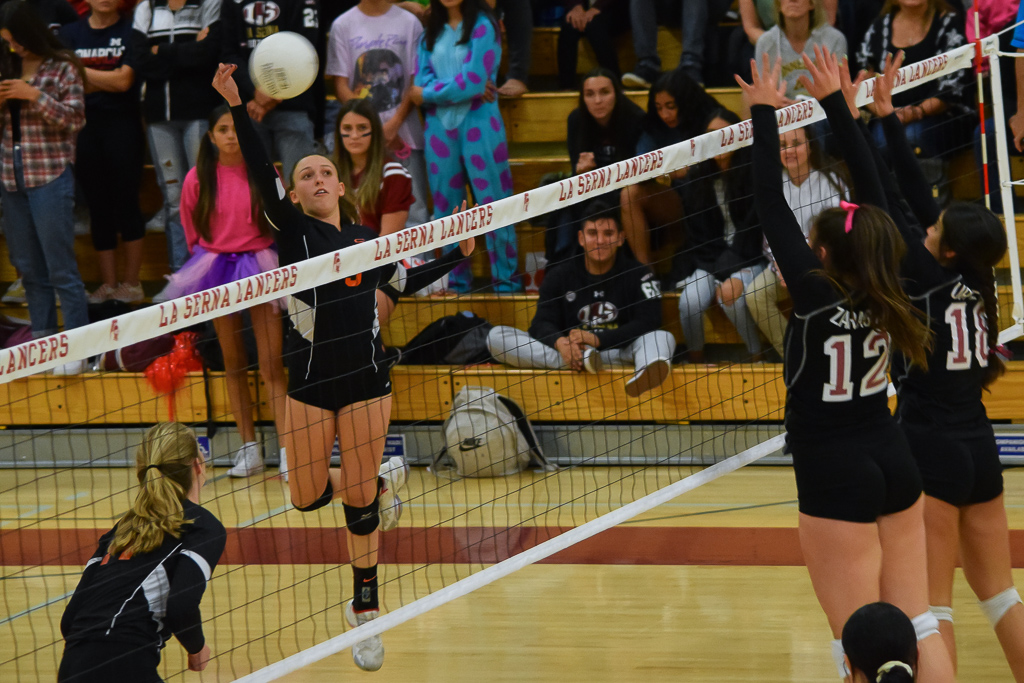 Sophomore Alyssa Sokolow managed to pull the Tigers out of an early deficit to win the first set, 25-19.

The Tigers began the first set by letting their nerves get in the way of their performance. Although Foord was able to squeeze in a few kills, South Pas had trouble keeping up with La Serna.

With the score at 9-3, coach Ivy Chew stepped in for a time out to halt the Lancers’ momentum. Sophomore Alyssa Sokolow used her powerful serve to bring the Tigers back into the game. South Pas won the first set and finished with a confident 25-19 victory.

The Tigers started the second set off strong, leading up to a 17-10 score. Throughout the second set, they faltered and let their weaknesses get the best of them, eventually losing the set to La Serna, 25-20.

After falling in the second set, the Tigers continued to struggle throughout the third set; they fell into a 7-0 hole early on. South Pas gained its rhythm back and evened the playing field with back and forth hits, eventually bringing the score to 15-17.

As the Tigers inched their way closer to the 25 point cutoff, Foord made incredible blocks and kills to tie the score at 20-20. However, they couldn’t sustain the success and lost the set, 25-23.

Facing elimination, the Tigers rallied together, holding a slim lead throughout the fourth set, as Foord continued to terrorize the Lancer defense with thundering spikes. South Pas broke away towards the end of the set and kept its CIF dreams alive, winning 25-17.

The Tigers missed multiple serves and fell behind early in the fifth set and trailed 7-5. Cleaning up their play, they surged ahead, 12-10, behind freshman Sofia Reyes’ string of aces.

South Pas and La Serna continued to trade points, with sophomore Abby Garner coming up with two big kills to keep the score close. With the Lancers at game point, Foord made an assertive spike to tie the set at 24. Soon after, La Serna failed to return junior Lindsey Hirano’s serve and South Pas escaped with 26-24 set win.

“It’s amazing [to win],” junior Sydney Abundo said. “I’m so glad to be apart of this team and I can’t believe that we are making girls volleyball history at SPHS.”

The Tigers will play either Norco or Calabasas in the CIF-SS D-IV semifinals on Saturday, Nov. 2.