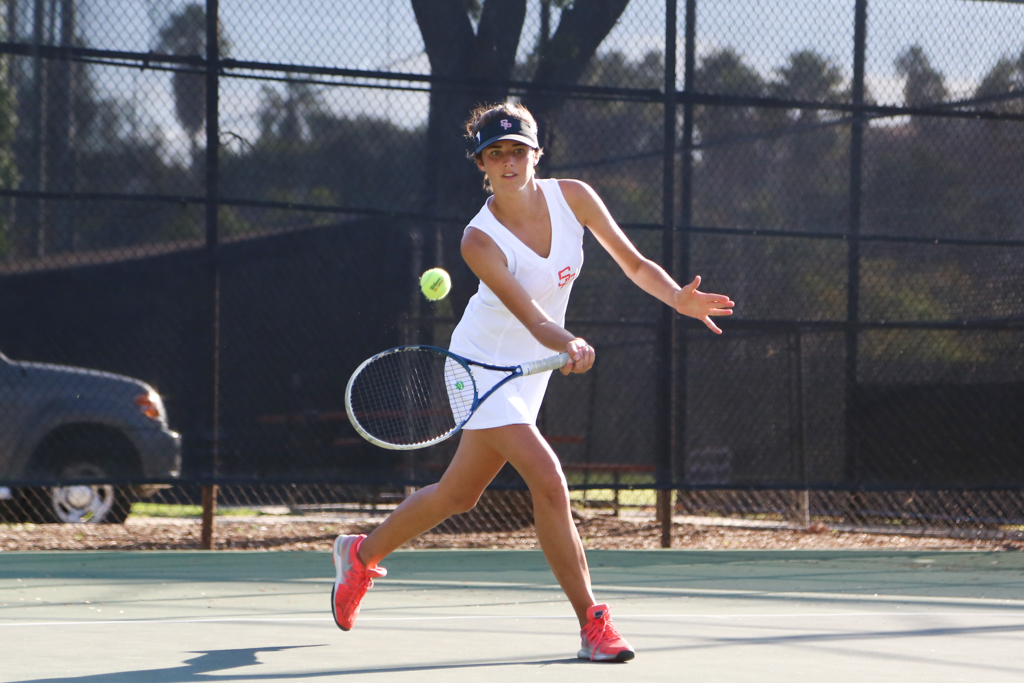 This article is from Tiger Newspaper’s September 2015 issue

The varsity girls’ tennis team has exceeded expectations throughout preseason play. Most recently, the girls were victorious at Schurr High School, topping the Spartans on Tuesday, September 22, by a score of 14-4. This game provides an excellent sample for what to expect in the upcoming Rio Hondo League Season from girls’ tennis.

The team came out swinging from the beginning, winning four of six in the first series of matches. Sophomore team captain Molly Round was victorious by a score of 6-3 in her first game. Freshman Shannon Huang overtook her opponent with barrages of backhand shots down the line, winning by a score of 6-3. Junior Anya Nicolaides rounded out singles performances in the first games with another promising victory.

The girls improved their overall performance as the game progressed, following a sloppy start for some. Collectively, the squad dominated by winning ten of the last twelve. Round claimed victory in her second set by placing a memorable backhand volley to finish a clean sweep of her opponent. Sophomore Emma Childers and junior Phoebe Moffett played together for the first time as doubles partners. The two girls proved that they possess strong talents especially when they are paired up. They won all three of their games, bringing out a clutch performance in their second set, breaking a tie by a score of 7-6.

The Tigers have the daunting task of facing the La Cañada Spartans at home on Thursday, September 24, to kick off their Rio Hondo League season. The Spartans have been historically tough opponents for the Tigers as South Pas finished third behind La Cañada last season. Nonetheless, the Tigers look to bounce back with vengeance.

One thing is different for this year’s squad, since a dynamic training regiment has enhanced the team’s overall performance. The new coach has emphasized the importance of conditioning and weight training to ensure a strong performance for the entirety of matches. Onlookers can expect a thrilling competition between these two teams when they square off.

“I am really proud of our overall preseason performance after putting in so much hard work,” Round said.

Football Continues to Impress During Preseason