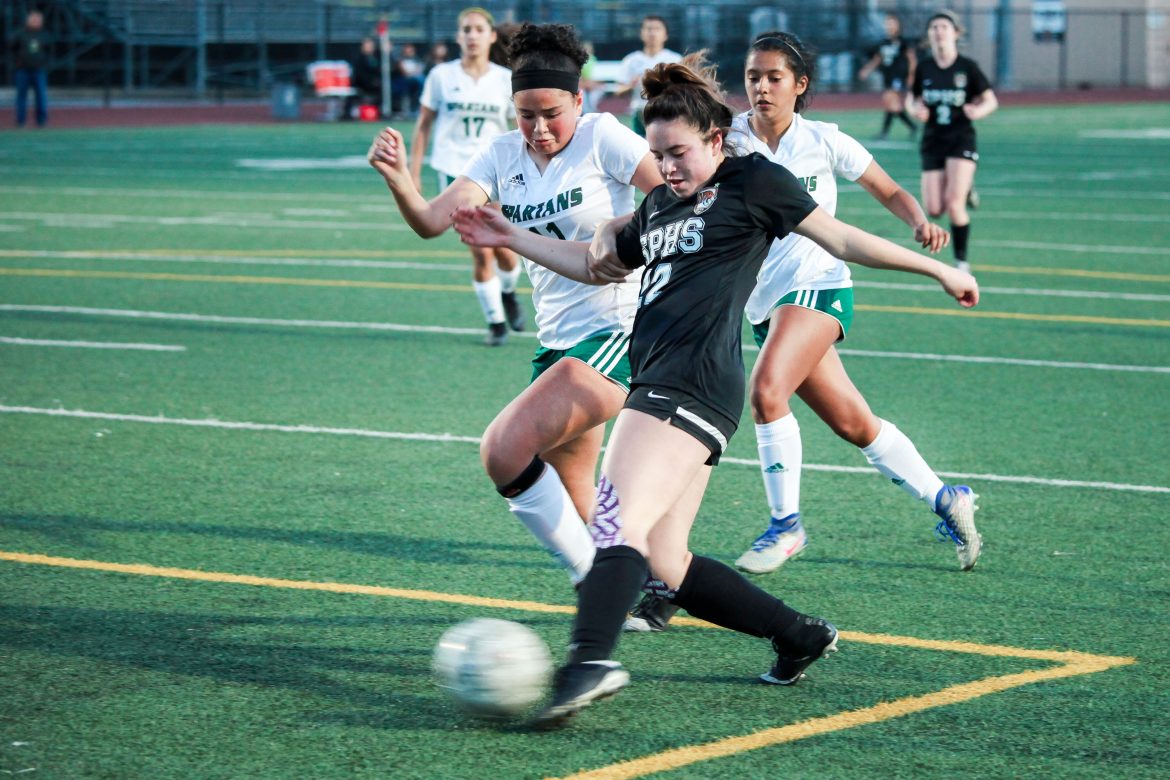 Senior Emma Barrera infiltrates the box and crosses it to her teammate for a goal.

The girls’ varsity soccer team seized victory against the Schurr Spartans 2-0 in a home game on Thursday, December 13. The Spartans gave an aggressive push against the Tigers’ collaborative lineup, but they nevertheless were outmatched. Regardless of South Pas’ dominance throughout the game, the Spartans combative nature pushed the Tiger’s to their limits, forcing them to truly play as a team. This triumph places South Pas’ preseason record at 6-1.

The Tigers managed to present offensive dominance early within the match. In the first 10 minutes, senior midfielder Uma Hornish rapidly flew past the Spartan defense, securing South Pas’ first goal. With the Spartans now invigorated from a conceded goal, the remainder of the half was fiercely competitive. Despite the multitude of offensive attempts from both teams, none were successful. The Tigers often managed to surpass the Spartan defensive line, but struggled to get anything past the dynamic goalkeeper. However, on the defensive side, the Spartans seldom outmatched South Pas’ impenetrable line. Defenders such as senior Jade Myer and junior Chloe Kim kept communication high on the field and aggressively intercepted potential goals.

Coming into the second half more determined to dominate, South Pas was able to gel together exceptionally. The team orchestrated their passes well and forcefully attacked the defensive line, yet still struggled to successfully penetrate the Spartan goalbox. Mirroring the Tigers’ match against Chino this past Tuesday, neither team could score and both were growing frustrated. Finally in the last five minutes of the game, an assist from senior Emma Barrera led South Pas to its final goal scored by junior forward Hannah Thompson.

“I definitely think that Schurr is a good competitor for us and the way we played together was better than our previous games,” senior captain AJ Bonk said. “The backline was more connected to the midfield which really helped me and the rest of the defenders because it was more organized. Everyone was just listening to each other which was really good.”

The Tigers are hoping to finish their preseason strong in their last games of the year at the Newport Harbor Tournament at Fedde Sports Complex on Saturday, December 15.