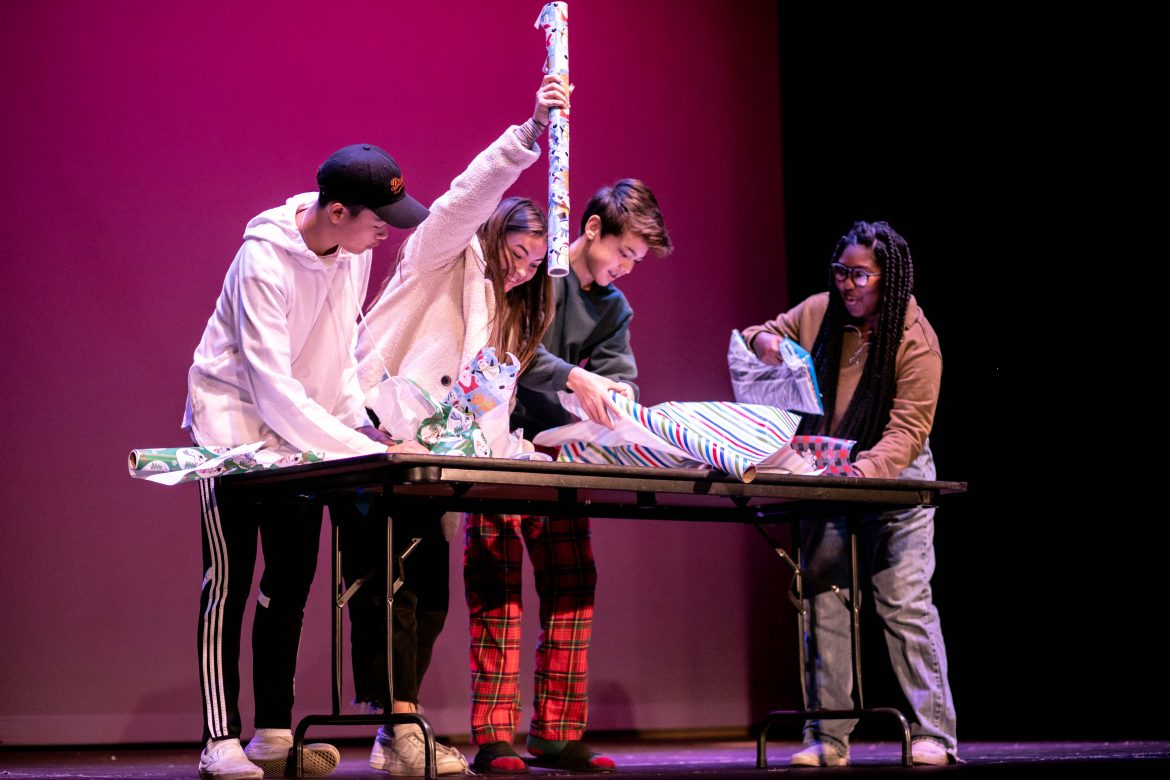 Representatives from each class gathered on stage to compete in a (w)rap battle during the 2018 Winter Assembly.

SPHS closed out 2018 with its annual Winter Assembly Friday, Dec.14. This year, Commissioner of Assemblies Flannery Clark took a new approach to the assembly, trading in the traditional assembly format — musical performances sandwiched between video sketches — for new acts to entertain the crowd.

The SPHS choir kicked off the assembly with a performance of “Riversong: A Celtic Celebration” and the assembly also incorporated a new sketch titled “The Chinettes,” dedicated to science teacher Don Wielenga. The short clip featured upside-down ASB members singing along to The Chordettes hit, “Mr. Sandman.”

“We tried to switch it up this assembly and stray away from the traditional winter assembly,” Clark said. “Especially with ‘The Chinettes’ being so weird, we really wanted to try new things at this assembly. I felt that people got hype, but…we can do a lot better. It can only get weirder from here.”

Although ASB had a different take on the Winter Assembly this year, some classic events remained the same. Commissioner of Noontime senior Nico Salazar led class representatives in competitions, which included the Wheel of Trivia Feud and a (w)rap battle. Winter sports captains were also invited onstage to encourage students to support their teams.

In the weeks prior to the assembly, students had the opportunity to ask significant other (or friend) to Winter Formal in a creative way and document the process for a prize of tickets at a reduced price. Both second and third place winners took a humorous approach to their proposal videos. In third place, junior Quyen Ballagh asked junior Nick Chan using Vine references, while second place winner junior Jewel Nguyen hid a proposal note in a burger for junior Tim Chiu. Senior Jessica Lopez took first place with her proposal to senior Jade Li with flowers and a poster at the Tournament of Roses, while “Marry You” by Bruno Mars played in the background.

ASB closed out the assembly with the announcement of the 2019 Winter Formal theme, “A Night in the Spotlight,” which will be held at Madame Tussauds Hollywood, on Saturday, Feb. 2.