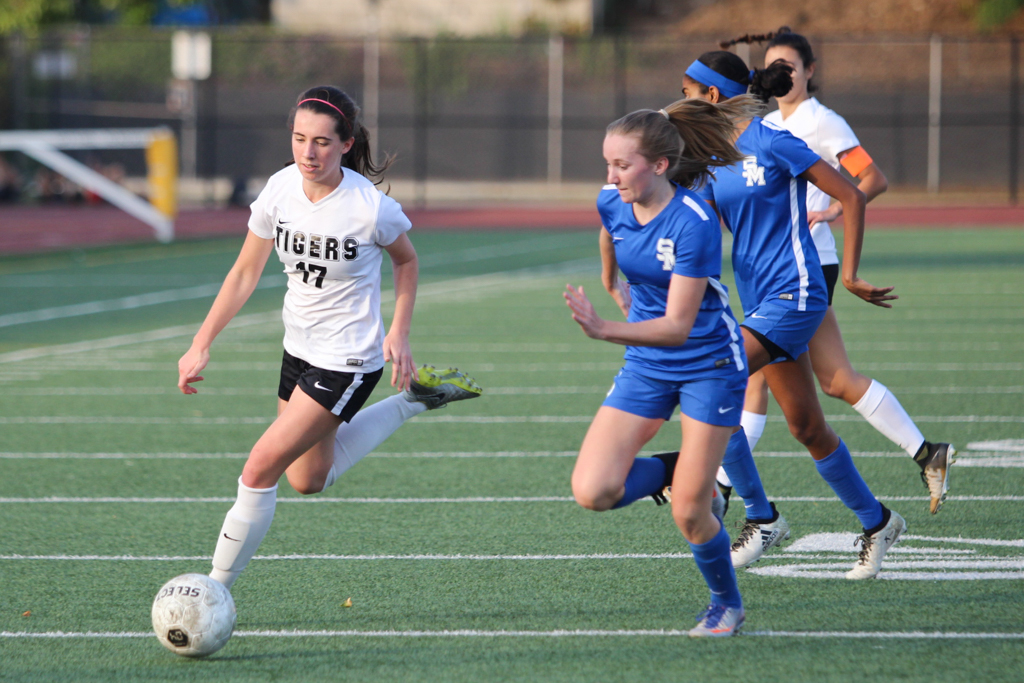 Junior Uma Hornish outruns a Titan defender as she runs toward the goal. The loss opens South Pasadena's record at 0-1 in league.

The girls’ varsity soccer team suffered a disappointing and extremely close 1-0  loss to the San Marino Titans at its home Rio Hondo League opener on Wednesday, January 10. Although displaying technical dominance over the Titans early in the first half, a San Marino goal late in the half proved to be irrevocable by a scrambling Tiger offense. The defeat places South Pas’ overall season record at 8-1-1 and their league record at 0-1.

Notably, the match began with a high intensity and speed unlike any other the Tigers played in their preseason. Most likely, this was a result of the well-known rivalry between San Marino and South Pas, but also is indicative of the level of play Tigers will face in the coming weeks as each team vies for a league title. 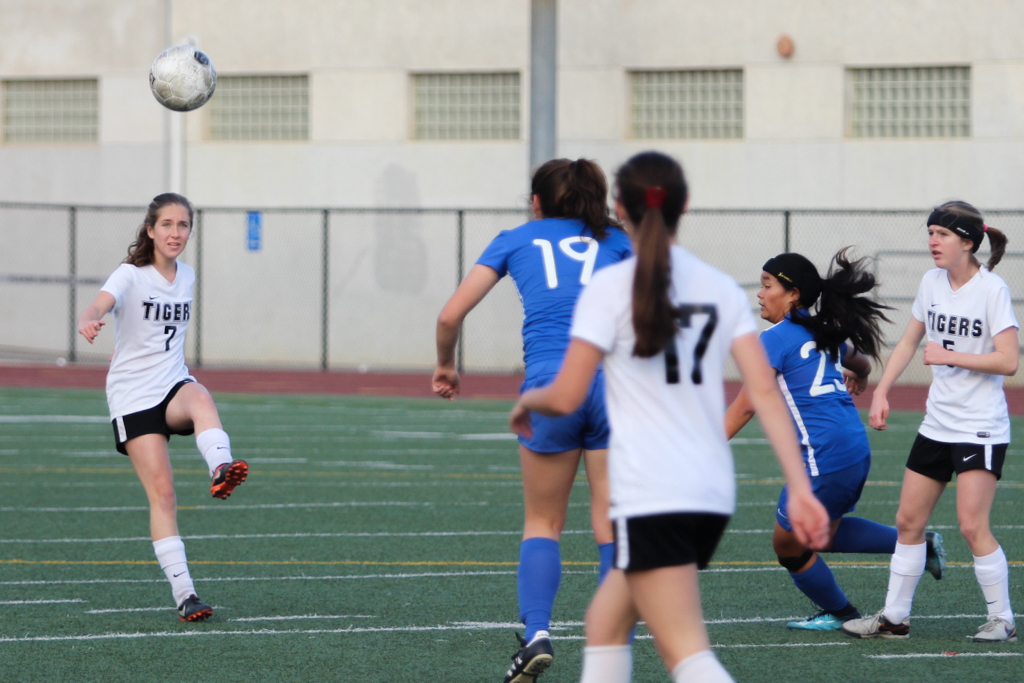 Senior Emily Dunn passes the ball to her teammate as two Titans are approaching. As a midfielder, she helped hold down South Pasadena’s tight grasp near midfield.

Despite the severe change of pace, the Tigers flexed their ability in the midfield, as senior, junior, and sophomore midfielders Emily Dunn, Rainey Tilley, and Corey Segal overpowered each of kept the ball in Titan territory for a majority of the half. Yet, South Pas was unable produce anything offensively, haunted by their past seasons difficulties with finishing. Throughout the half, the Tigers were given eight corner kick opportunities to no avail. Although there were strong showings from senior and junior forwards Harper Fox and Uma Hornish, all attempted shots were always a second too late or a foot too wide, never finding the back of the Titan net.

Ten minutes from the end of the half, the Tigers briefly fell out of step and let the Titan attack break into South Pas domain. This reflected a pattern that could be traced throughout the course of South Pas’ preseason: in many games, the Tigers faced moments of weakness, allowing opposing teams to gain significant ground. The weakness was less important when up against the unchallenging teams of preseason, but the lapse of focus against San Marino proved to be detrimental. Following chaos and messiness in South Pas’ goal box, a Titan forward was able to muster a goal in the disarray, securing their first and only goal. The half closed with the Tigers unable to make any semblance of a counter-attack.

Diving into the second half, the pressure to score weighed heavily upon South Pas. The Tigers were able to establish some sort of concentration, but their stress clearly showed through. Jarred by their first goal conceded in season play, South Pas could not recover to the powerful unit they once were earlier in the match. Passes were jumbled, shots were somewhat frantic, and communication was scattered.

Meanwhile, the Titans were eager to protect their lead, playing out the clock while still competing aggressively. San Marino had multiple shots on goal, which prompted brilliant saves from junior goalkeeper Noemi Howland. Though the Tigers fought hard until the bitter end, no further goals by either team were attained.

“At the end of the day, personally I thought we beat ourselves,” head coach Victoria Lathrop said. “Our shot percentage was horrible this game. As much as we held the middle, we dominated, we just failed to produce anything offensively. Which is unfortunate, because  at the other day, I think we are the better team. Let’s be real, the goal that they had was not a stellar goal. It was a rinky dink goal that we didn’t clear because of a communication breakdown. Sure, we can start league behind them for one game, we still have to go to their home field– we move on.”

Coming out from an unparalleled preseason and a long winter break, this initial loss was certainly not expected by the Tigers. But, this is only game one of a long road ahead, and South Pas plans to redeem their record. They are up against the Monrovia Wildcats at an away game on Friday, January 12.