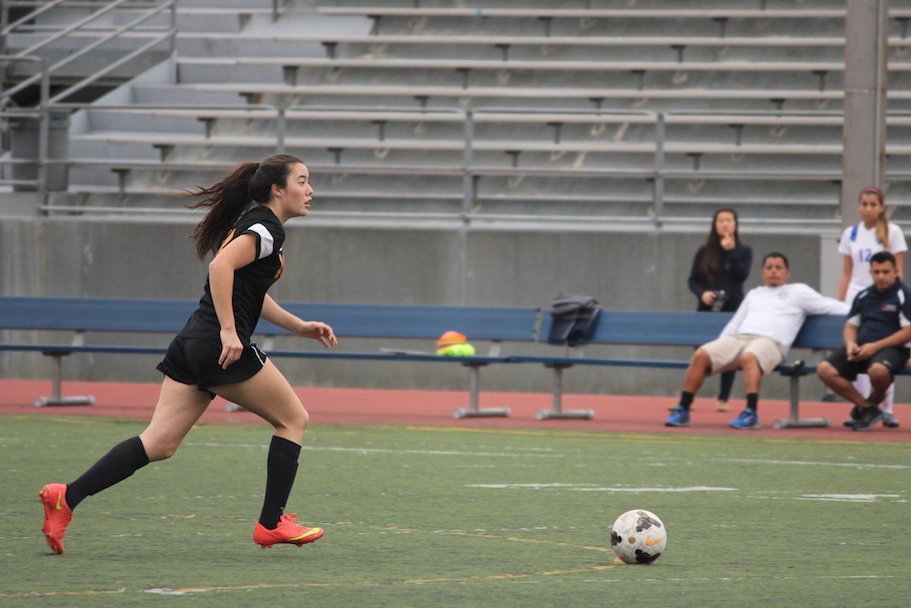 The girls’ varsity soccer team lost an away game against Sierra Vista High School by a score of 1-3 on Tuesday, December 8. This brings the squad’s preseason record to 0-3 as the team continues to struggle in finding its footing.

The team began the first half of the game aggressively attacking the goal; the Tigers came up with multiple close attempts, but failed to complete any of them. Sophomore forward Cate Latting took the first shot, which the opposing goalkeeper blocked. The resulting corner kick led to another opportunity to score, but the Tigers inside the opponent’s box failed to complete the play. The Dons then began to attack on the other end, but sophomore defender Riley Segal cleared the ball several times, leading to more offensive possessions for the Tigers. However, Sierra Vista began to control the ball, and put pressure on the South Pasadena defense. Sophomore goalkeeper Sophie Reynolds blocked multiple shots, but after the Tiger defense failed to clear a loose ball, a player from Sierra Vista took control, shot the ball, and put it in the back of the net. After the first goal, the Dons continued to put pressure on the Tigers’ backfield and prevented the team from getting any more productive possessions. Reynolds continued to prevent the Dons from scoring again in the first half with more close saves, ending the half 0-1.

Sierra Vista continued to pressure South Pas in the second half, and showed dominance on the offensive end with multiple more shots. However, goalkeeper Reynolds made many crucial saves that kept South Pasadena in the game. Later in the half, senior midfielder Lauren Richards took a direct penalty shot from a long distance away from the goal, and managed to overcome the lined up defenders and opposing goalkeeper to put the ball in the back of the net. Reinvigorated by the tying goal, the Tigers fought to win the game and exchanged possessions with Sierra Vista for a period of time. Despite the Tigers’ effort, the Dons regained the lead through an indirect penalty pass to a header into South Pasadena’s goal. Sierra Vista dominated the rest of the possessions, scoring a final goal in the last few minutes.

“We are getting better as a team throughout the preseason games but we need to work on connecting and finishing,” Richards said. “This game was tough but it only motivates us more to work harder.”
The team plans to end its preseason drought in the next game at home on Thursday against Mayfield High School.