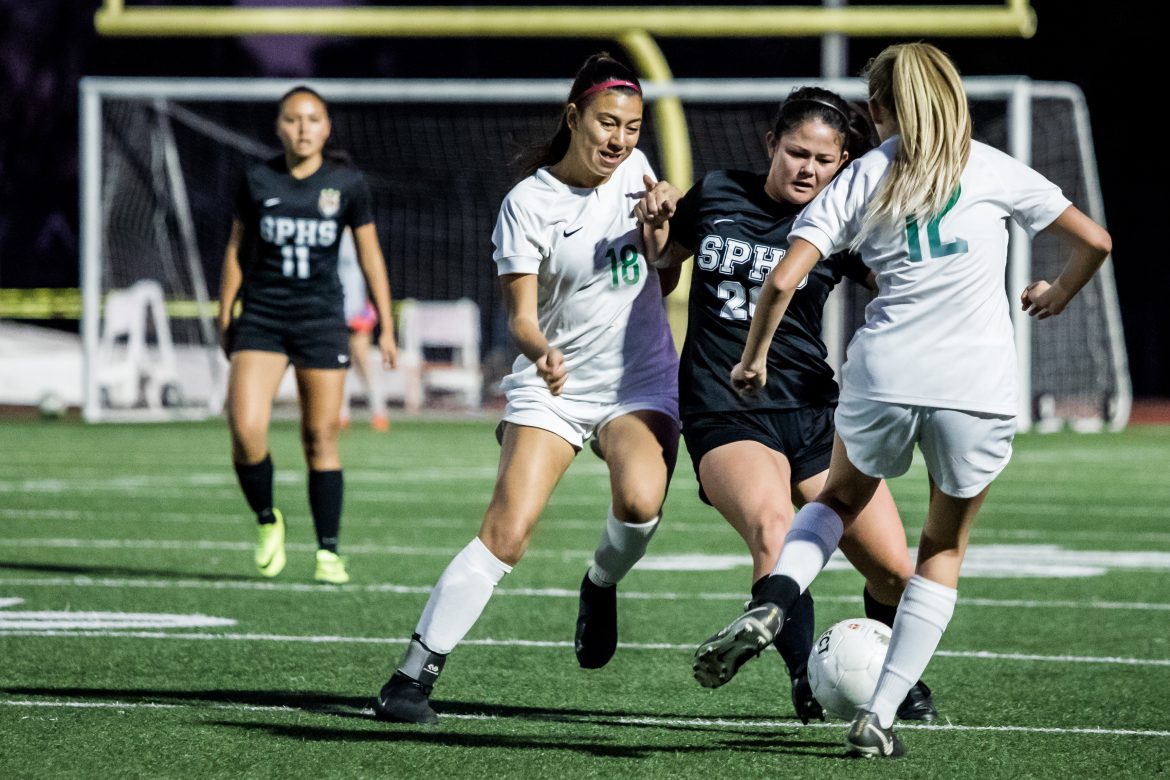 Senior Jade Myer and the rest of the Tiger offense struggled to find their rhythm in the senior night loss.

The SPHS girls’ soccer team had their senior night spoiled, as they were shutout by the Monrovia Wildcats by a score of 1-0 on Saturday, January 26. The tenacious Tiger defense stifled a plethora of Wildcat attacks, but the usually clinical offense struggled to find their finishing touch.

Running off of the adrenaline of senior night, the Tigers aggressively opened up the match with a high press, forcing many unforced Wildcat errors. Leading the charge was senior midfielder Rainey Tilley, who fearlessly challenged the physical visitors and played outlet passes to the Tiger wingers. The Tigers nearly broke through with 30 minutes left in the half when senior Uma Hornish neatly controlled a defensive clearance, cut inside to her dominant right foot, and struck the ball just wide of the post. South Pas continued to fire in shots from all distances, but the Wildcat goalkeeper’s heroics kept the match scoreless entering the half.

The Wildcats began to find their offensive groove in the new period, and would have had a one-on-one opportunity if not for a last minute tackle from senior AJ Bonk. The Tigers continued to relentlessly pelt the Wildcats with accurate shots on the offensive end, but the Wildcat defense and goalie refused to let anything pass by. With less than ten minutes remaining, a Monrovia defensive midfielder intercepted a Tiger buildup and sent a through ball to a Wildcat forward. The home crowd and team awaited an offsides call, but the assistant referee kept his linesman flag down, allowing the Wildcat forward to score the sole goal of the game.

Following the game, seniors Noemi Howland, Jenna Noueihed, Maÿlis Whetsel, Jade Myer, Emma Barrera, Wynorlin Duaso, Tilley, Hornish, and Bonk were recognized for their continued dedication as members of the varsity team. The heartfelt ceremony was decorated with balloons, posters, and pictures as juniors and underclassmen read out poems to their graduating seniors.

The Tigers remain atop the league standings with a record of 4-2-1, but are closely pursued by San Marino and Monrovia. The girls will travel to Temple City next Thursday in their final tuneup prior to CIF as they seek to repeat a league championship.